Almost five years after the US invaded Afghanistan in retaliation for 9/11, the Taliban appears on a comeback trail, sparking a renewal of ethnic and warlord-based conflict with an overlay of ambition from neighbors. In confronting a powerful Taliban resurgence in southern Afghanistan, the Pakistan-US alliance is also at odds. Complicated politics and unrest place Afghanistan’s moderate government at risk, while Pakistan’s military regime relies on the crisis to perpetuate its rule and maintain a buffer against increasing Indian influence in Afghanistan. NATO pledges commitment to stabilizing the one-time Taliban stronghold, yet many Afghans suspect that the US plans to ease operations and withdraw. If the US does decrease troops, it would have to depend on the Pakistani military to hold the Taliban in check. The Pakistani military, unpopular with Afghans, also faces opposition at home. Despite the US campaign for democracy and ongoing friction between the two countries, Washington could end up supporting Pakistani President Pervez Musharraf in his reelection bid. – YaleGlobal 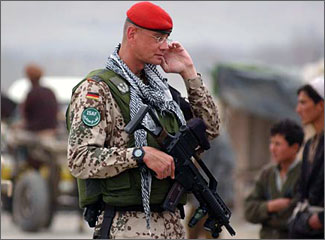 Allo Brussels, we have a problem: NATO forces serving in Afghanistan come under strong Taliban attack

MADRID: As unprecedented Taliban violence sweeps across southern Afghanistan, four players in the region – Afghanistan, Pakistan, the US and NATO – are locked in a tense standoff rather than cooperating to defeat the terrorists. At stake is the future survival of Afghanistan’s moderate government and stability in Pakistan.

To prop up Afghanistan and combat the Taliban, the US and NATO may have to make major concessions to Pakistan’s military regime, but any concessions would anger the Afghans, encourage the extremists and allow the unpopular military to dominate Pakistan’s political scene for another five years.

More than 200 people were killed and hundreds wounded in fierce fighting that swept four provinces in southern Afghanistan starting May 18 and continued for the next three days. It was the worst bout of violence since the defeat of the Taliban in December 2001 and the opening shots in a promised Taliban offensive this summer to deter some 9,000 NATO troops from deploying in southern Afghanistan.

“NATO will not fail in Afghanistan….the family of nations will expect nothing less than success,” said General James Jones, the head of US and NATO forces in Europe, adding that NATO will double its deployment in Afghanistan to 18,000 troops. Jones also made an impassioned plea for NATO governments to end the caveats that they impose on their troops, making it next to impossible for commanders to run a proper military campaign. The caveats number 71, and Jones calls them “NATO’s operational cancer’’ and “an impediment to success.”

President Hamid Karzai and the Afghans worry about NATO. Unlike the US-led combat force, some NATO countries contribute troops only for reconstruction. The Taliban know this and test NATO’s commitment. Some 800 Afghans and 34 foreign soldiers have been killed this year in escalating violence, as small Taliban groups expand to hundreds of fighters each. An indirect confirmation of the growing Taliban presence and the difficulty in fighting them without large civilian casualties was evident in late May, when in a single night of bombing on a Taliban stronghold in southern Afghanistan, the coalition forces claimed to have killed 80 fighters but the operation also took some 17 civilian lives.

But this setback is unlikely to change the Taliban design to test US resolve. NATO’s deployment is part of Washington’s agenda to reduce its forces in Afghanistan. The US is pulling 3,000 troops this summer and maybe more before the November congressional elections. Most Afghans anticipate a full US withdrawal, despite American promises that it remains committed to Afghanistan. The Karzai government is angry with Washington, and also frustrated at the US attitude toward Pakistan.

Senior NATO officials in Madrid told YaleGlobal that Pakistan’s military regime is turning a blind eye to Taliban recruitment and control taking place in Baluchistan province. Pakistan has lost more than 600 troops fighting Al Qaeda and other terrorist forces in the North West Frontier Province, but has done little to control the Taliban in Baluchistan, say NATO officers.

US and European officials have urged Pakistan President Pervez Musharraf to do more. “We are trying to engage with Pakistan and convince them to do the right thing,” says a senior NATO officer. A recent NATO delegation to Islamabad tried to woo the military by offering officers visits to NATO schools in Europe. Pakistan insists it is doing what it can to reign in the Taliban. General Shaukat Sultan, the army’s principle spokesman, says Pakistan will act the moment NATO or the US gives, “actionable intelligence as to where Taliban leaders are.”

However Pakistan’s real gripe is with the Americans. In recent months an angry Musharraf has quietly, but deliberately defied them. Relations between the two countries have not been so poor since 9/11. In March Bush spent just a few hours in Islamabad after spending several days in India, where he gave recognition to India’s nuclear weapons program, but refused to do the same for Pakistan.

So in recent weeks Islamabad has said the investigation into top nuclear scientist A. Q. Khan, the world’s worst proliferator of nuclear technology, is at an end – just when Washington again urges Pakistan to allow US investigators direct access to Khan, who is under house arrest in Islamabad and could prove that Iran is intent on making nuclear weapons. More than a decade ago Khan provided key nuclear equipment to Iran. However, Islamabad is in no mood to do Washington any favors or annoy Tehran.

“Yes we are under a lot of pressure on the issue of Dr. A. Q. Khan, but we will not surrender,” Foreign Minister Khurshid Kasuri told the upper house of parliament on May 19. “We are an ally of the US in the global war on terror, but we will not take dictation from anybody on our national interests.’’ Pakistan also pushes ahead to build a gas pipeline from Iran through Pakistan to India, at a cost of US $7.2 billion, despite repeated US warnings not to do so.

The push for a lucrative gas pipeline to India, however, has not reduced Pakistan’s public antipathy towards India. The Pakistani army accuses Washington and NATO of turning a blind eye to India funding an insurgency in Baluchistan that has claimed hundreds of lives. India denies the charge. Pakistan is also convinced that the US and Afghanistan are allowing Indian spy agencies unparalleled access among the Pashtun tribes in southern Afghanistan, from where they are destabilizing Pakistan.

So it’s not surprising that the military still looks to the Taliban as its long-term proxy force in Afghanistan. The military assumes that they have as much of a right as the government in Kabul to influence events and make key appointments in the Pashtun belt in southern Afghanistan – even though Afghanistan is a sovereign state. The army has a legacy of influencing the south since the Soviet invasion of Afghanistan 27 years ago. Pakistan wants the Americans and NATO to concede to its version of reality and also give the Taliban and other Afghan extremist factions a place at the table in Kabul.

Musharraf’s real aim is to get unqualified US endorsement for his re-election as president for another five-year term, while retaining his post as army chief. Thus, recent statements by senior US officials, including National Security Adviser Stephen Hadley, demanding free and fair elections in 2007 and civilian control over the Pakistan, disturb Pakistani generals.

Musharraf insists there will be free and fair parliamentary and presidential elections, but the army is already making plans to limit the participation of the Pakistan Peoples Party, the largest secular opposition party. In 2002 the army rigged the elections, and parliament is now packed with pro-army politicians and Islamic fundamentalists.

Musharraf is between a rock and a hard place. A fair election would most likely result in a parliament hostile to continued army rule. However a rigged election endangers his grip on power and the army’s prestige, and he views US support for the army as critical in mitigating international fallout. However, military rule has run its course in Pakistan. It is deeply unpopular and no longer has the credibility to resist Islamic fundamentalists. At the end of the day, Washington might do what it has done time and again: take a deep breath and support the only ally that may still stand between the planned US withdrawal and the return of the Taliban.