Tangled Threads of Protectionism – Part I

One of the textile industry's oldest problems is again under focus: how to adjust in the face of changing technology, tastes, and economic fundamentals. Politicians are calling, not surprisingly, for a populist solution – protect jobs by raising walls against imports. In a three-part series, trade experts examine the issues surrounding the post-quota state of the textile industry. With the possibility of a new round of US and EU quotas on Chinese imports, how will these measures fare? In part one, Pietra Rivoli arrives at a surprising conclusion: Trade protectionism is not simply ineffective in protecting wealthy countries' textile industries; it is responsible for speeding their demise. The development of the modern global textile supply chain – in the artificial quota-based market – illustrates how jobs in rich countries have steadily diminished despite being cushioned from the effects of surging Chinese imports. The quotas sped the industry's globalization, chased higher-end production out of the West, and ended up hurting those hoping to benefit. "A generation of unintended consequences has shown how a once robust industry used trade protection to help sink its own boat," Rivoli writes. And, she warns, a return to those quotas will only amount to more of the same. – YaleGlobal

Tangled Threads of Protectionism – Part I

Production quotas have hurt more than helped US and European textile industries
Pietra Rivoli
Tuesday, May 3, 2005 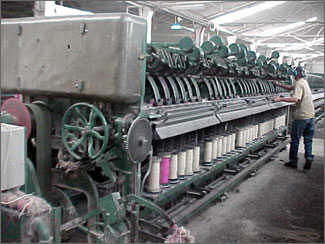 Machines ate jobs: Textile jobs were lost more to automation than to imports

WASHINGTON: This week, textile producers in the US and Europe appear to have taken a step toward victory in their efforts to hold the floods of imports of clothing from China at bay. A US court ruled in favor of textile interests which were pursuing additional restraints on Chinese imports, while in the EU investigations were opened into surging imports from China in nine new categories of textiles and apparel. If history is a guide, however, continuing to protect rich country textile industries from cheaper imports will lead to a host of unanticipated consequences, many of which will serve to further weaken these already struggling industries.

Under political pressure from rich country producers, the Multi-Fiber Agreement (MFA) beginning in 1973 restricted imports of textiles and apparel into the US and Europe. The MFA has long ignited an extreme version of the free trader's standard outrage against protectionist regimes: the MFA was an anachronism in a forward moving, liberalizing universe, a hypocritical blight on the free trade rhetoric of US policy, and a violation of the WTO principles that prohibited both quotas and discriminatory market access. Worst of all, the MFA constrained the ability of poor countries to export their way out of poverty, while at the same time bilking US consumers to prop up a few textile magnates in the Carolinas. According to recent studies, protection for the US textile and apparel industry cost between US$7 and US$12 billion per year, and results in an effective tax on clothing of 48 percent.

All of these consequences are closely related to the usual free trade arguments directed at trade protection. Less standard and more interesting, however, is the inescapable conclusion that trade protection in the end became the enemy rather than the savior of the US and European textile industries.

First, the MFA not only did not slow the global race to the bottom in textile and apparel production, but instead greased the wheels and increased its pace. Quotas first came into effect in the US shortly after World War II in the form of temporary limits on cotton textiles from Japan, but these limits only hastened the movement of the industry to locations such as Hong Kong. When cotton textile quotas were then placed on Hong Kong, production again shifted in response, this time to countries such as the Philippines and Sri Lanka. The quotas did not only fail to keep production in rich countries, but accelerated rather than slowed the globalization of the industry. Similarly, quotas on cotton goods led trading partners to shift production to man-made fibers such as polyester, again facilitating the globalization of production. When quotas were placed on man-made fiber products as well, poor countries shifted to fabrics such as ramie and linen. Each time a hole in the import dyke was plugged by quotas – on cotton socks from China, say, or silk ties from Thailand – the effect was not to preserve US jobs but instead to increase the force of imports gushing in from other countries and categories.

Second, the quotas also hastened rather than slowed the flight of higher-end production from the US. When China is granted the right to sell a cotton knit shirt to the US, it does not waste this quota on a cheap t-shirt but instead will "upgrade" to produce a combed cotton polo for Ralph Lauren. Potential low-end producers, then, have been encouraged by the quotas to become high-end producers, thereby speeding rather than slowing the loss of higher value-added manufacturing from rich countries. In a factory I recently visited near Shanghai, the owner was upgrading to fancy Halloween costumes partly out of fear that quotas would be reimposed on more pedestrian goods.

Third, by "protecting" producers at each stage of production (yarn, fabric, finished goods), the quotas in the end imperiled rather than enhanced the chances for protected producers to remain competitive. Because of the quotas on yarn, US and European fabric producers faced higher costs and fewer choices in purchasing inputs. Because of the quotas on fabrics, apparel makers were challenged in obtaining the best fabrics at the best prices. Individual political successes in the end hastened collective economic failure. A related problem has been that the quotas effectively limited the international diversification and production possibilities of US and European firms. There wasn't much point in moving production to low-cost locations if exports to rich countries were then limited by quotas.

In a fourth perverse consequence, the spoils of the quotas flowed not to US and European producers or workers, but to their commercial rivals. Because imports from China were (and remain for some goods) so tightly controlled, quotas are actively traded in legal and illegal markets. According to traders in Hong Kong, in the summer of 2004 Chinese quotas allowing firms to sell underwear to the US were going for about 75 cents per pair, while quotas for wool coats were trading at US$650 (that's right, six-hundred-fifty dollars) per dozen. In Travels of a T-Shirt, I estimate that the apparel quotas granted to China by the US represented a gift of about US$905 million to the Chinese government in 2004. If this gift to China could instead be allocated to the 98,000 US textile and apparel workers who lost their jobs in 2003, each worker would receive more than $9,000 in job retraining or other benefits.

Perhaps all of these consequences would be more bearable if it could be shown that textile quotas protected American jobs. But from a peak of about 2.5 million jobs shortly after the World War II, the industry today employs just 600,000 people. For better or worse, the bleak employment picture in textiles and apparel has relatively little to do with trade and almost everything to do with automation. During the past decade, labor productivity in the industry has doubled due to rapid advances in technology, and production has remained relatively steady. Even if our borders were closed to imports entirely, jobs would likely be disappearing: US firms would still have to compete with one another, and this competitive pressure would lead to further automation and lower employment. The quotas have not, and cannot now, save jobs in the face of advancing technology. Even in countries like China, where production in textiles is booming, employment is falling.

Aggressive use of the China Safeguard to reinstate quotas will prolong the perverse effects discussed here while at the same time failing to protect employment. The quotas will increase the number of imports from countries such as India, limit rich country access to the best fabrics, and encourage upgrading by Chinese producers while discouraging rich country firms from moving production to China.

More quotas will not only fail to save rich country textile producers, but may instead speed their demise. When it comes to trade policy, the moral seems to be, "be careful what you ask for." A generation of unintended consequences has shown how a once robust industry used trade protection to help sink its own boat.

Pietra Rivoli is Associate Professor at Georgetown University’s McDonough School of Business. This article is based in part on her book, The Travels of a T-Shirt in the Global Economy (Wiley, 2005).