For Tehran, Nuclear Program Is a Matter of National Pride

The development of nuclear technologies has become a matter of nationalistic pride for Iranians from all walks of life. The government of Iran has had a hand in cultivating this trend, but the mobilization of public sentiment is mostly due to the popular perception of the United States as an antagonist, writes George Perkovich. By calling Iran dangerous and casting it in the role of an aggressor in world politics, Washington has upset Iran’s self-image as a civilized, forward-moving nation. Iranian officials claim that Tehran would like to cultivate peaceful nuclear technologies for the sake of diversifying energy sources, which is sanctioned under the Non-Proliferation Treaty (NPT). They claim that objections to such a legal induction of technology are deliberate attempts by Western nations to obstruct Iranian industrialization. While the United States and Europe are correct to suspect Iran’s motivations in carrying this out in secret, they would do well to reexamine the NPT. As long as the treaty is flawed, the Iranian government will be able to perpetuate its image of a victim of unfair discrimination. “Iran is mounting a fairness campaign; the United States and EU must counter with a better one,” writes Perkovich. –YaleGlobal

For Tehran, Nuclear Program Is a Matter of National Pride

Having used a legal loophole to enrich uranium, Iran is loath to give it up under US pressure
George Perkovich
Monday, March 21, 2005 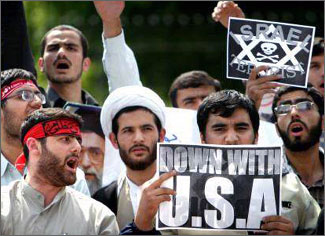 Say No to Pariahdom: Iranians accuse the US of using the nuclear issue to keep Iran down

TEHRAN: If you want to experience nationalism wrapped in nuclear power, this is the place. Officials, professors, and taxi drivers all would tell a visitor that Iran does not want "the bomb," but only "nuclear technology" or "the fuel cycle" – needed to run power reactors. Indeed, nuclear weapons would make Iran vulnerable and isolated, insist officials and regime opponents alike. Iranians want nuclear technology to show the world that their nation is advanced, fully developed, and strong – that Shiite Iran is the greatest society in Southwest Asia. Enriching uranium and generating electricity within the rules of the international nonproliferation system satisfies these objectives better than bombs.

Civilizational pride makes Iranians loathe being seen as rule-breaking, lying aggressors in quest of nuclear weapons. Cannily putting their shady nuclear past behind them, they now project themselves as a sophisticated, law-abiding member of the international community seeking nuclear fuel-cycle capabilities. But Iran’s recently uncovered nuclear practices, and its unsettled neighborly relations, deepen many people’s conviction that new rules are needed to manage nuclear technology.

A promotional videotape from Iran's atomic energy organization trumpets the call for Iran’s acceptance in the existing nuclear elite. Pictures of nuclear installations are interspersed with blooming flowers and snow-capped mountains in a paradisiacal montage. An enthusiastic narrator (speaking English!) trumpets, "Iran is a country of intelligent people." A young worker at the uranium conversion plant in Isfahan holds a small canister of uranium hexafluoride (which can be processed into fuel for power plants or bombs) while other young men reach to touch it as if a sacred artifact.

"Our people feel great pride because our young Iranian scientists can produce nuclear fuel, the most important part of the fuel cycle, despite all of the sanctions and pressure from the West," explains Iran's chief nuclear negotiator, Hassan Rohani. Another official notes privately, "US pressure has unified the people in wanting nuclear technology, even more because the US says we can't have it."

Rather than prepare the public to accept a backing away from nuclear technology, Hashemi Rafsanjani, Chairman of the Expediency Council the driving force behind the nuclear program since the late 1980s, stokes nationalist resistance. He says Iran is willing to apply unprecedented monitoring and control on its nuclear activities, but the United States rejects this because Washington truly aims to keep Iran from becoming a developed country. Oil will run out soon, he argues, and countries like Iran will need nuclear technology in order to be developed. Washington’s attempt to deny this is payback for its dependence on Persian Gulf oil in this narrative.

Iranians want US respect, but not on terms imposed by Washington, especially if those terms reflect a dim view of Iranian civilization. Iranians inside and outside the government display injured pride at the idea of international pariahdom. How can the United States treat Taliban-infected Pakistan as an ally, and indulge its careless possession of nuclear weapons, but regard Iran as the world's worst menace? "Pakistan – is that a country?" an influential Iranian conservative asked me when I said I was on my way there.

Iranians see Japan as a model for their future: "We want what Japan has," a leading Tehran professor insists. "If Japan can have the fuel cycle and stay happily in the NPT, why can't we?"

Because Iran is not Japan. Japan recognizes all its neighbors; Iran does not accept the existence of Israel. Japan does not support organizations engaged in violent struggle and targeting non-combatants; Iran does. Japan has not been lying about its nuclear activities for the past 20 years. Differences between Japanese and Iranian approaches to human rights and global economic integration also explain international confidence in Japan's nuclear responsibility – and doubts about Iran's.

Even if Iran were more like Japan, the world cannot accommodate more nuclear Japans. Terrorism and unstable global security dynamics make it too risky to allow new factories for separating plutonium and enriching uranium, as Iran seeks. Iran's insistence on purely peaceful intentions may be genuine, but intentions can change too quickly for comfort in states with nuclear weapons capabilities.

The Bush administration, Mohammed El Baradei of the International Atomic Energy Agency (IAEA), and Kofi Annan agree that the interpretation of nonproliferation rules must be updated in order to keep additional states from acquiring facilities to produce potentially dangerous nuclear materials. The Nonproliferation Treaty's vague Article IV right "to develop research, production, and use of nuclear energy for peaceful purposes" should not be interpreted to endorse additional states' acquiring uranium enrichment or plutonium separation facilities.

Lacking the temperament to build an international consensus on better rules, the United States aims to unite a coalition of willing "good guys" to keep "bad guys" like Iran from acquiring potentially dangerous technology. According to this logic, bad guys are illegitimate by definition, so their interests need not be recognized or accommodated. And if bad guys have sympathizers, they, too, should be ignored.

The problem, of course, is that the United States alone – or even with the UK, France, and Germany – cannot coerce Tehran to accept an interpretation that neither it nor a majority of the world thinks is fair .Coercion of a state as proud and powerful as Iran only works if the vast majority of its neighbors and counterparts are unified in pressing sanctions and isolation. (No significant coalition will support US or Israeli military force.) And that unity will come only if the "rule" being enforced appears fair enough to encourage voluntary compliance.

The Iranian strategy now is to play by the rules and demonize Washington for trying to change them. Tehran presses the IAEA to certify its compliance with nonproliferation standards, and therefore allow it to resume uranium enrichment and plutonium programs without sanction. Iranian officials hint they will accept any European-suggested verification measures, in order to prove Iran's peaceful intentions. Iran will do anything but give up its "right" to enrichment capability.

As chief negotiator Rohani put it, "termination of fuel cycle activities as demanded of Iran means you have killed the NPT. If you take out Article IV, all developing countries will step out of the treaty…. Termination is war between the North and the South. The Americans say forget about Article IV, forget about the disarmament promised in Article VI….The US today is trying to create a second discrimination, one between those that have peaceful nuclear technology and those not allowed to have peaceful nuclear technology."

Washington's challenge is to prevent Iran from isolating it! The United States and EU are right on the substance, but to garner international support they must make trade-offs that the Bush administration resists. If options for national nuclear fuel-cycle development are to be constricted, then concessionary international energy cooperation needs to be expanded – perceptions of neocolonialism must be debunked. If controls on proliferation of dual-use technology to new countries are to be tightened, then commitments by nuclear-weapon states to dismantle their arsenals and quit building new nuclear weapons must also be tightened. Iran is mounting a fairness campaign; the United States and EU must counter with a better one.

George Perkovich is vice president for studies at the Carnegie Endowment for International Peace and co-author of Universal Compliance: A Strategy for Nuclear Security.