Terrorists and Their Tools - Part I

The weapon of mass destruction that seems to be favored most by terrorists is their own lives. But, though most suicide bombers are Islamic youths, sociologist Riaz Hassan argues that there is no direct link between suicide attacks and Islamic fanaticism. Suicide attacks, Hassan says, are motivated more by politics than religion. Many terrorist groups, such as the Tamil Tigers in Sri Lanka, adamantly oppose religion but are not loath to using suicide bombers to achieve their nationalist goals. And, those groups that do use religion, like Hamas, use it to recruit potential bombers and raise operational funds. Their goals, however, are purely secular, aimed at coercing Israel to change its policies and leave Palestinian territories. Indeed, Hassan says, to bring an end to suicide attacks it is crucial to understand that suicide attacks are used as a means to achieve multiple ends - personal, political, and religious. Rather than mobilize militaries against suicide bombers, Hassan says, “to eliminate suicide attacks ultimately requires addressing and lessening the grievances of populations that carry them out.” Without tangible progress towards "at least some of the fundamental goals that suicide attackers and those supporting them share,” he argues, efforts to stem suicide attacks are destined to fail. - YaleGlobal

Terrorists and Their Tools - Part I 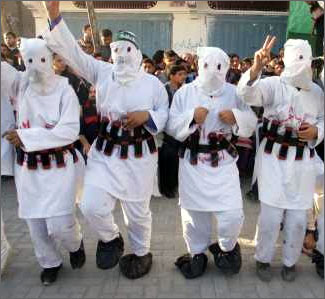 Hamas suicide bombers rally: Religious recruits with a secular goal of coercing the Israeli government to change its policies.

ADELAIDE: At a time when the Western world worries about weapons of mass destruction in terrorist hands, a more basic device has emerged as the weapon of choice - a life itself. This use of life as a weapon - now exercised mainly by Islamic youth - is frequently presented as the manifestation of Islamic fanaticism. But studies by serious scholars and recent surveys show that the spate of suicide attacks in the Middle East is linked more to politics than to religion.

Data shows that the incidence of suicide attacks has increased from 31 in the 1980s to 98 in 2003 alone. The war in Iraq and escalation of the Israeli-Palestinian conflict have led to such an increase. Furthermore, American foreign policy may be contributing to an acceleration of this trend.

In particular, suicide attacks are now plaguing the occupying forces in Iraq. They are escalating among the Iraqi resistance groups because of their lethality and media impact. Suicide attacks are also being used by Iraqi Shiite and Sunni Muslim militants in their bloody sectarian conflict. In general, suicide attacks constitute about three percent of all terrorist incidents, but they account for almost half of the deaths due to terrorism. When the US troops entered an abandoned factory shed in Fallujah during their siege of the city on April 11, they found a dormitory of would be suicide bombers, complete with a cache of leather belts stuffed with explosives and bomb making instructions.

What motivates the perpetrators of such attacks? In a ground-breaking study, University of Chicago political scientist Robert Pape has shown that there is little connection between religious fundamentalism and suicide attacks. The leading instigators of suicide attacks between 1980 and 2001 were the Tamil Tigers in Sri Lanka, a nationalist group whose members, though from Hindu families, are adamantly opposed to religion. Religion does not play as large a role as it is normally accorded. Religion is used effectively by the Palestinian radical groups Hamas, Palestinian Islamic Jihad and the al'Aqsa Martyrs Brigades to recruit suicide attackers and to raise operational funds. But the leadership of these organizations has a secular goal: to coerce the Israeli government to change its policies and to leave Palestinian territories. Thus, even if some suicide attackers are irrational or fanatical, the leadership of the groups that recruit and direct them is not.

Pape's study shows that suicide attacks follow a strategic logic designed to coerce modern liberal democracies into making political and territorial concessions. "Terrorists have learned that it pays," leading to a rise in suicide attacks over the past two decades, according to Pape. Hezbollah- and Hamas-directed attacks succeeded in compelling American and French troops to leave Lebanon in 1983. They also prompted Israeli forces to leave Lebanon in 1985 and quit the Gaza Strip and the West Bank in 1994 and 1995. The Tamil Tigers succeeded in winning major concessions from the Sri Lankan government from 1990 onwards using this tactic.

The few studies that have tried to explain the motivations of suicide attacks have tended to focus on the attacker's psychopathology, poverty and lack of education, or individual motives, such as religious indoctrination, especially Islamic fundamentalism. These explanations have been found to be seriously flawed.

After reviewing psychological studies of suicide attackers, University of Michigan psychologist Scott Atran concluded that suicide attackers have no appreciable psychological pathologies and are as educated and economically well-off as the surrounding populations. To understand why non-pathological individuals volunteer to become suicide attackers we must focus on situational factors, which are largely sociological in nature. In the context of the Middle East, these include a collective sense of historical injustice, political subservience, and a pervasive sense of social humiliations vis-a-vis global powers and their allies.

Understanding the dynamics of suicide attacks also requires understanding what drives humans to suicide. In modern psychiatry and sociology, suicide is regarded as an end, an exit from adverse social conditions in which the individual feels powerless. In my studies of suicide over the past 30 years, however, I have questioned this characterization. Suicidal behavior in a variety of settings may be used not as an end in itself, but as a means to achieve multiple ends, including self-empowerment in the face of powerlessness, redemption in the face of damnation, and honor in the face of humiliation. In my opinion, this is central to a more meaningful understanding and explanation of contemporary suicide attacks in the Middle East and elsewhere.

Nasra Hassan, a United Nations relief worker in Gaza, interviewed 250 aspiring suicide bombers and their recruiters. She found that none were uneducated, desperately poor, simple-minded, suicidal or depressed. But their social contexts displayed the dynamics of their actions.

According to her respondents, "If our wives and children are not safe from Israeli tanks and rockets, theirs will not be safe from our human bombs." In an interview, the late spiritual leader of Hamas, Sheikh Yasin, told her that martyrdom was a way of redemption, "Love of martyrdom is something deep inside the heart. But these rewards are not in themselves the goal of the martyr. The only aim is to win Allah's satisfaction. That can be done in the simplest and speediest manner by dying in the cause of Allah. And it is Allah who selects martyrs." Humiliation has acted as a powerful magnet for recruiting suicide bombers. A senior recruiter told her, "After every massacre, every massive violation of our rights and defilement of our holy places, it is easy for us to sweep the streets for boys who want to do a martyrdom operation."

Since Muslims professing religious motives have perpetrated most suicide attacks over the past two years, including those on September 11, 2001, it may be obvious to conclude that Islamic fundamentalism is the root of this phenomenon. This assumption has fueled the belief that future September 11 type attacks can only be prevented through liberalization and democratization of Muslim societies. This was a key rationale used by the United States to mobilize public support for the war in Iraq. Ironically, policies based on such an assumption may foster the development of domestic and foreign policies in the United States which are likely to worsen the situation.

One indication that this may happen is reflected in the results of the March 2004 Pew Global Attitudes Survey, which showed that in several Muslim countries (Jordan, Morocco, Pakistan), a majority of respondents thought that the American government was overreacting to terrorism. The respondents also supported suicide bombings by Palestinians against Israel and against Americans and other Westerners in Iraq.

What strategies can be used to stem the tide of suicide attacks? Military actions and concessions to the groups sponsoring suicide attacks are not likely to succeed. According to sociologist Kathleen Carley of Carnegie Mellon University, eliminating the central actors with extensive networks and ties to other cell members actually spurs terrorists to adapt more quickly and is less effective in the long run. Thus the assassination of leaders, a favorite Israeli tactic, may be counter-productive. Pape has suggested that the most effective way to counter the challenge of suicide terrorism is to reduce terrorists' confidence in their ability to carry out attacks on the target society, through better border defenses and homeland security.

To eliminate suicide attacks ultimately requires addressing and lessening the grievances of populations that carry them out. Support for suicide attacks is unlikely to diminish without tangible progress in achieving at least some of the fundamental goals that suicide attackers and those supporting them share.