Thai Workers Fly to Sweden Where the Wild Berries Are

Wet summer weather in Northern Sweden has affected not only the yield of wild berries growing there, but also the economic well-being of the berry pickers, which, in this case, happen to be temporary workers from Thailand. Journalist Bertil Lintner writes that in 2007, Sweden began to give Thais temporary work visas to pick berries, encouraging close to a five-fold increase in workers by 2009. It seemed like a win-win situation: jobs Swedes refuse to take were filled, and Thais earned a tidy sum. In fact, the amount that industrious Thais can make during the summer is often enough to allow them to buy a house when they return home. But there are also risks: the weather being one – as this year proved – and also the investment made to get to Sweden. Some workers borrow heavily from the Thai government and loan sharks to pay for the trip. When the wild berry yield is below normal, the borrowers can’t pay their debts. This story of gain and heartbreak of people traveling far for a better life serves as an illustration of the process of globalization and its unintended consequences. – YaleGlobal

Thai Workers Fly to Sweden Where the Wild Berries Are

RAGUNDA, NORTHERN SWEDEN: It’s been a bad year for blueberries and lingonberries in Sweden. Normally, these wild berries grow in abundance in the Swedish forests. But a long, wet summer with more rain than anyone can remember destroyed the berries even before they had matured. That’s bad news for Thailand as well. Every year, in what has become a regular feature in today’s globalized world, thousands of Thais travel to Sweden to pick wild berries. The life may be hard, and anyone from a tropical climate would find the weather unbearable even when it’s summer in Sweden. But, under normal circumstances, Sweden’s abundant fields of wild berries bring wealth to rural Thailand and fresh berries and jams on European tables.

In 2007, Swedish immigration authorities began to authorize the country’s diplomatic missions abroad to issue visas and temporary, three-month work permits for nationals of certain countries to pick wild berries in Sweden during the summer. The Swedish embassy in Bangkok was among these, and during the first year 1,129 Thais were allowed to travel to Sweden to pick wild berries. In 2008 3,582 Thais were given permits, as word had spread that it was possible to make a small fortune by Thai standards from spending a couple of months in a remote forest camp in Sweden’s northern provinces. 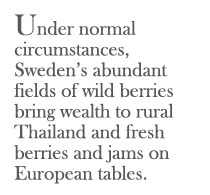 The Swedish press described the Thais as “exploited slave workers,” but money they sent back has been enough for some of them to buy a small house somewhere in Thailand’s impoverished northeast, from where most of the berry-pickers came. Some have even been to Sweden more than once, as such jobs are easy to find because it’s a backbreaking work that few Swedes would do. And even if unpredictable weather conditions make it a gamble, it is possible, some of the workers say, to earn up to 20,000-40,000 Swedish crowns a month, or nearly 100,000-200,000 Thai Baht (US$2,850-5,700) — much more than a doctor or other well-paid professional back in Thailand.

Not surprisingly, the Thais are not the only foreigners picking berries in the Swedish forests. There are East Europeans and others as well, but the Thais are considered the best. They pick more berries than workers of any other nationality. That could be because of their work ethic. Or, as someone has suggested, stooping down and picking wild berries from tiny sprigs may not be that different from planting and harvesting rice in a paddy field back home in Thailand. 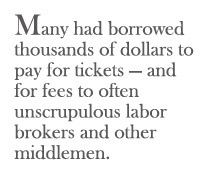 This year, as many as 5,911 Thais came to Sweden to pick berries. But bad crops in the Swedish forests turned out to be a disaster. Many had borrowed thousands of dollars to pay for tickets — and for fees to often unscrupulous labor brokers and other middlemen. A foreign worker can only get a visa and temporary work permit if he or she has been employed by a foreign labor broker who is recognized by the SBIF, Skogsbranschens Intresseförening, or the Swedish Forestberries Association. They can then borrow up to 100,000 Thai Baht, or US$ 3,000, from the Bank for Agriculture and Agricultural Cooperatives, a Thai state enterprise under the jurisdiction of the Ministry of Finance. But, if it’s a bad year for wild berries, where pickers might net $1,000 per month at most, it’s inevitable that it will be difficult to repay those loans. Many workers have also borrowed money from private loan sharks and paid brokers to facilitate the process.

As a result of all this, many Thais this year returned destitute instead of rich. And the Thai embassy in the Swedish capital of Stockholm even had to intervene to help some of the workers return home. In August, Thai labor minister Paitoon Kaewthong also traveled to Sweden to see the Thai workers and for talks with representatives of the Swedish companies employing them. Berry-picking was not the only issue he discussed with Swedish employers. The two sides, the Thai daily Bangkok Post reported on August 30, also “discussed how to expand the Swedish job market for Thai laborers” — because there are also other unattractive slots in the Swedish labor markets, which now have to be filled with foreign workers despite rising unemployment among the Swedes themselves. 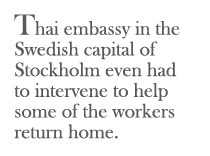 Today, most Swedes traveling to the northern provinces are likely to meet Thais who are not berry-pickers. There are Thai restaurants, take-away outlets and food stalls not only in major towns but also in small villages in the countryside. Over the past two decades, many Thais have settled in Sweden and the total number of Thai-born people here may now be nearly 30,000. Some are Thai women who have married Swedish men, but there are also Thai men who work in restaurants and other small businesses. On the other side of the ledger, around 300,000 Swedes visit Thailand annually.

In Utanede, east of the northern town of Östersund, there is evidence of an even older connection — a genuine Thai pavilion, which has become a tourist attraction for Swedes and foreign visitors alike. Its Thai-style 28-meter spire towers over birch-trees and pines, and, in winter, the entire area is under at least a meter of snow.

The pavilion, the only of its kind outside Thailand, is built on the spot where Thai King Chulalongkorn visited in 1897. During his European tour, he went to Sweden and found its many sawmills particularly interesting because Thailand at that time had a thriving teak industry. In remote Utanede, local Swedes flocked to gape at the Asian king and his entourage, guests who at that time was seen as extremely exotic. 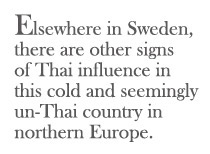 “This is great, says Noi, a young woman speaking in the northeastern dialect. It’s good for the Swedes to experience a bit of our culture, and we feel almost at home here.” The project to build the pavilion to honor King Chulalongkorn even led to a new dimension to Thai-Swedish relations. More than being just a tourist attraction, the Thai pavilion in Utanede also sparked more interest in Sweden for trade and tourism between the two countries.

Elsewhere in Sweden, there are other signs of Thai influence in this cold and seemingly un-Thai country in northern Europe. In the central industrial town of Borlänge, with its steel mill and paper factory, the Finns are the most numerous of the town’s foreign workers because their country once was part of Sweden. But the Thais, numbering between 2,000 and 3,000, now make up the second largest immigrant group in Borlänge. On each of the present Thai King and Queen’s birthdays, December 5 or August 12, they gather at the town’s Buddhist shrine together with their spouses and neighbors.

So the Thais in Sweden are not only seasonal workers in the northern forests, who sometimes have to suffer unforeseen hardships. Many are here to stay — and they are no longer perceived as “exotic” as King Chulalongkorn was a century ago. They are established members of local communities.

Bertil Lintner is a Swedish journalist based in Thailand and the author of several works on Asia, including “Blood Brothers: The Criminal Underworld of Asia” and “Great Leader, Dear Leader: Demystifying North Korea under the Kim Clan.” He can be reached at lintner@asiapacificms.com.