Alarm about nuclear weapons and the irreversible harm that detonation might cause for the globe prompted nations to sign the Treaty on the Non-proliferation of Nuclear Weapons, which went into force in 1970. Signatory nations without weapons agreed to not pursue the research, and nations with them agreed to reduce the numbers. But with the end of the Cold War, public fear about nuclear warfare has subsided. This three-part series analyzes the challenges of ignoring the non-proliferation treaty and shows the reason to work towards nuclear abolition. Small states – including Pakistan, India or Israel – have ample numbers of weapons to cause widespread environmental destruction, argues Alan Robock, environmental sciences professor with Rutgers University, in the second article of the series. The dangers of regional nuclear battle should not be underestimated; sophisticated computer simulation shows how heavy smoke rising from one region would soon cover large parts of the globe, bringing a drop in temperatures and starvation for millions. Robock concludes, “The combination of nuclear proliferation, political instability and urban demographics may constitute one of the greatest dangers to the stability of society since the dawn of humans.” – YaleGlobal 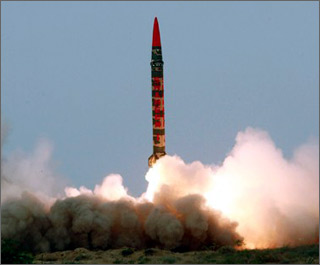 Growing club: The world has reduced total nuclear weapons, but there's danger as more nations acquire the technology; above, Pakistan tests a missile in December 2007

NEW BRUNSWICK, NJ: A nuclear war between India and Pakistan, with each country using 50 Hiroshima-sized atom bombs as airbursts on urban areas, would produce climate change unprecedented in recorded human history. This surprising conclusion is the result of new research published in 2007 by a team of scientists who produced the pioneering work on nuclear winter in the 1980s. Copies of all the papers, with figures, slide shows and animations are available for free download here.

Research conducted jointly by Western and Soviet scientists 25 years ago discovered that an all-out nuclear war between the United States and the Soviet Union would produce a nuclear winter, plunging the planet into freezing temperatures and making it so cold and dark that the world’s capability to grow food would be destroyed, sentencing billions of people to starvation. Within two years after this work was publicized, the nuclear arms race ended. Several years after that, the Soviet Union and the Cold War ended. Mikhail Gorbachev has said in interviews that the consequences of nuclear winter were an important factor in his actions at the time. 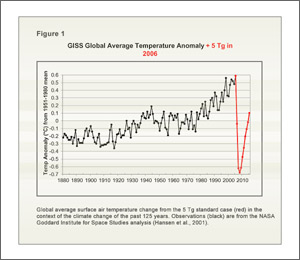 Figure 1. Global Average Surface-air Temperature Change of the past 125 years. The large global warming we have experienced in the past century would more than be erased. But with 20,000,000 dead immediately and many more injured from the effects of blast, fire, and radioactivity, cities would be rendered uninhabitable for long periods, and the global food supply diminished. This should not even be considered as a solution for global warming. Click here for NASA Goddard Institute for Space Studies. Enlarge image

But now, although the total number of nuclear weapons in the world is about one-third of the peak number in the 1980s, there are more nuclear states, with Israel, India and Pakistan each having an arsenal of 50 to 100 weapons. A nuclear war between any two of these so-called “small” nuclear states, using less that 0.3 percent of the nuclear weapons in the world today, with less that 0.03 percent of the total explosive power of the global arsenal, would produce so much smoke from the resulting fires, that it would plunge the Earth to temperatures colder than those of the Little Ice Age of the 16th to 19th centuries. This would not be nuclear winter, but growing seasons in the midlatitudes of both hemispheres would be shortened by weeks, temperature on land would be several degrees lower, and precipitation would be much lower in some places. Some crops would never reach maturity and the food supply for many millions would be threatened.

How could this happen? Megacities in developing countries have developed in India and Pakistan, providing tremendous amounts of fuel for potential fires. If there were a nuclear war between India and Pakistan, the direct effects of the weapons, blasts, radioactivity, fires and extensive pollution would kill millions of people, but only those near the targets.

However, the fires would have another effect. Cities and industrial targets would produce massive amounts of dark smoke. The fires themselves would loft the smoke into the upper troposphere, 10 to 15 kilometers, or 6 to 9 miles, above the Earth’s surface, and then absorption of sunlight would further heat the smoke, lifting it into the stratosphere, a layer where the smoke would persist for years, with no rain to wash it out. New calculations show that for 50 nuclear weapons dropped on each country, on the targets that would produce the maximum amount of smoke, some black smoke would be immediately washed by rain and some would be lofted into the stratosphere, transported around the world by the prevailing winds. 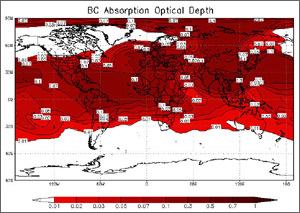 The map shows animation of smoke spreading after nuclear battle in South Asia; the smoke is heated by absorbing sunlight, lofted into the upper stratosphere, and blown into the Southern Hemisphere. Click here to see simulation by Alan Robock

New results, predicting the smoke’s travel, were made possible by a state-of-the-art general circulation model of the climate. For the first time a complete calculation of not only atmospheric but also oceanic circulation was conducted, including the entire atmosphere from the surface up through the troposphere, stratosphere and mesosphere, to an elevation of 80 kilometers, or 50 miles. Previous calculations had not been run for the 10-year simulations, as done here, and did not follow the smoke lofted into the upper stratosphere, where it would persist for many years.

There continues to be some confusion in the public mind about whether the nuclear-winter theory was correct, and about whether it was subsequently shown that a nuclear war between the superpowers would produce something more like a nuclear autumn, with less climate change than first thought. Subsequent research suggests that the nuclear-winter theory was indeed correct. The new climate modeling system was also used for two additional scenarios, the entire current nuclear arsenal used in a conflict between the US and Russia, and the use of one third of the current nuclear arsenal, also targeting the US and Russia. The first of these additional scenarios is the same as the baseline scenario used 25 years ago. It turns out that the cooling from the smoke would indeed plunge continental areas in both North America and Eurasia into sub-freezing temperatures for years. And the effects would last much longer than previously thought. The primitive climate models and computers first used for nuclear-winter calculations could not simulate the lofting and persistence of the smoke or the long time it would take the ocean to warm back up. 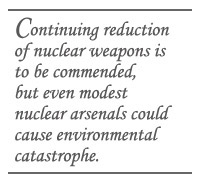 The first nuclear war, in which the US dropped two atomic bombs on civilians in Hiroshima and Nagasaki, Japan, in 1945, so shocked the world that despite the massive buildup of these weapons since then, they have never been used in war again. Nuclear-winter theory now shows not only that the superpowers still threaten the existence of the rest of the world, but that the newly-emergent nuclear powers threaten the former superpowers, perhaps not with extinction, but with serious consequences including drought and famine.

The US and Russia are signatories to the Strategic Offensive Reductions Treaty, which commits both to a reduction of deployed nuclear weapons by the end of 2012 – to about 1700 to 2200 weapons. This continuing reduction of nuclear weapons is to be commended, but these new results show that even much more modest nuclear arsenals leave the possibility of a nuclear environmental catastrophe. Having survived the threat of global nuclear war between the superpowers so far, the world is increasingly threatened by the prospects of regional nuclear war. The consequences of regional-scale nuclear conflicts are unexpectedly large, with the potential to become global catastrophes. The combination of nuclear proliferation, political instability and urban demographics may constitute one of the greatest dangers to the stability of society since the dawn of humans. Nuclear weapons cannot be used. Only abolition of nuclear weapons will prevent this potential catastrophe.

Alan Robock is a distinguished professor in the Department of Environmental Sciences, Rutgers University, New Brunswick, New Jersey. Click here to contact him.