Time to Strengthen the IAEA

The International Atomic Energy Agency established an 18-member commission chaired by Ernesto Zedillo, director of the Yale Center for the Study of Globalization, to reflect on how the nuclear future might unfold, what the world is likely to demand of the IAEA, and what steps must be taken to allow the agency to fill those needs. The result of the commission’s deliberation was presented to the IAEA in a document, “Reinforcing the Global Nuclear Order for Peace and Prosperity: The Role of the IAEA to 2020 and Beyond.” In presenting the commission’s report to the Board of Governors in June, Zedillo said it was remarkable that notwithstanding the members’ respective national and professional backgrounds and different, and in some cases opposing, views on several important topics tackled in their work, they reached unanimous conclusion – that facing newer and more complicated challenges in an era with greater demand for nuclear energy, the IAEA must be strengthened by its member states with additional authority, resources, personnel and technology. – YaleGlobal

Time to Strengthen the IAEA

With global demands for nuclear energy on the rise, the international regulator cannot be neglected
Ernesto Zedillo
Thursday, August 7, 2008 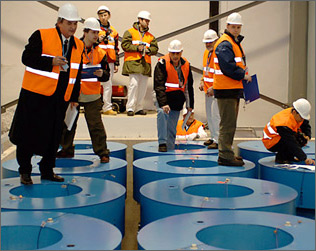 On the front line: The IAEA protects against nuclear accidents or proliferation; above, IAEA inspectors

NEW HAVEN: G8 leaders meeting in Japan during the second week of July noted that a growing number of countries look to launch peaceful nuclear power programs. The leaders stressed the importance, as the nuclear club expands, of ensuring the non-proliferation of nuclear weapons and the safety and security of nuclear facilities. Yet the organization responsible for maintaining the global nuclear order – the International Atomic Energy Agency – despite being a remarkable institution for its achievements throughout its half a century existence, is struggling to do its job because of a chronic lack of resources.

This year, I chaired an independent 18-member international Commission that was asked to look into the future of the IAEA. My colleagues and I were impressed by the agency’s technical competence, whether in assessing Iran’s nuclear program or helping to fight hunger by using nuclear techniques to breed more resilient varieties of rice. But we were frankly shocked to learn that the IAEA, one of the most respected international organizations, has been operating virtually on a shoestring for nearly two decades.

The cost to the world of a single act of nuclear terrorism or a serious accident in a nuclear power plant would be incalculable. In contrast, the cost of strengthening the IAEA to help prevent such catastrophes is modest. The resource situation of the IAEA is now critical. Years of zero growth policies have left the organization with a failing infrastructure. Vital elements of its work – for example nuclear safety and security – are funded largely on an unpredictable and unstable 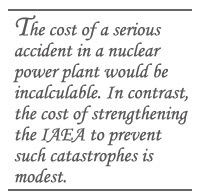 IAEA Director General Mohamed ElBaradei was absolutely right a few weeks ago in telling its Board of Governors: “There is a disconnect between what you are asking the Agency to do and what you are ready to finance.”

Core agency activities, such as monitoring the shutdown of North Korean nuclear facilities, have had to be paid for through voluntary contributions solicited from member states because there are insufficient funds in the regular budget.

Likewise, the agency’s ability to analyze samples taken at nuclear facilities worldwide – essential for its independence and credibility in determining the nature of a country’s nuclear activities – is in serious jeopardy because of the obsolescence of its laboratory equipment and chronic under-investment in its infrastructure. With a regular budget this year totaling just €289 million, the agency has rightly been described as an extraordinary bargain by many eminent persons.

In the commission’s report, we make recommendations on issues that world leaders need to tackle as a matter of urgency. These include strengthening the non-proliferation regime, accelerating nuclear disarmament and meeting rising demands from developing countries for access to nuclear techniques to combat poverty, disease and drought. Ensuring safety in the use of nuclear energy and the security of nuclear and other radioactive materials must also be high priorities. Unless the IAEA is given adequate human and financial resources, it will be unable to properly fulfill its crucial role in addressing these issues. 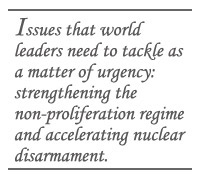 First, we recommend an immediate once-off cash injection of €80 million to enable the IAEA to, among other needs, refurbish its Safeguards Analytical Laboratory (SAL) and develop its Incident and Emergency Response Center. Investment in infrastructure and IT projects, for example, has been deferred because of budgetary restraints. The SAL, which evaluates sensitive samples taken at nuclear facilities and which must maintain accuracy, confidentiality, speed and cost effectiveness, was built in the 1970s, and both maintenance and investment in new equipment have suffered under the constrained budget. Through its Incident and Emergency Response Center, the IAEA coordinates international notification and assistance to help states to respond in the event of a nuclear accident or a terrorist attack, and to cope with the consequences. In such a crisis, effective plans for public communication are critical to reduce the likelihood of panic, but the center does not yet have the resources to fully carry out this role.

Second, the effective budget freeze must end. Funding needs to be made secure and predictable. The budget ideally needs to double by 2020. The extra resources would be used in a whole host of areas, from making sure that vital programs to combat nuclear terrorism are adequately staffed and equipped, to helping countries embarking on nuclear power programs to develop the necessary infrastructure, safety regimes and waste-disposal mechanisms.

The IAEA’s authority to go after possible nuclear proliferators needs to be strengthened. Its inspectors should be given more powers to follow up suspected nuclear weaponization activities. As has become clear from recent events, sometimes transparency going well beyond the measures called for in the Additional Protocol is needed to provide confidence that a state’s nuclear program is entirely peaceful. The Additional Protocol of the Treaty on the Nonproliferation of Nuclear Weapons (NPT) called for enhanced access and more intrusive inspections of countries’ nuclear programs in an effort to strengthen and expand verification and safeguards. 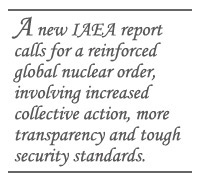 Although nuclear safety has improved enormously in recent decades, the risk of an accident at any given reactor must continue to be reduced. The IAEA’s role in persistently improving the global safety regime is critical and must be reinforced. Therefore, the agency should work with member states to coordinate research to design reactors that are economical, safe and proliferation-resistant.

It should be given a key role in managing new multinational mechanisms to assure supplies of nuclear fuel, at market prices, to countries with peaceful nuclear energy programs. This means that countries would not need to master the enrichment and reprocessing technology that would give them nuclear-weapons capability. It is one of the most promising non-proliferation avenues now being explored, by the US, Russia as well as other countries.

None of this will take place in a political vacuum. Article VI of the NPT legally obligates the nuclear-weapons state parties to negotiate in good faith toward nuclear disarmament, and at the 2000 NPT Review Conference, they agreed that the treaty represented an “unequivocal undertaking” to “accomplish the total elimination of their nuclear arsenals.” This commitment is an integral part of the NPT bargain.

World leaders need to make the reinvigoration of the nuclear non-proliferation regime a priority, with the nuclear-weapon states following up on their commitment to reduce and ultimately abolish their nuclear stockpiles. International nuclear verification will be essential as disarmament proceeds and the IAEA is uniquely suited to playing a central role. The agency should be tasked with monitoring the huge stockpiles of fissile material that will be released from nuclear-weapons programs.

What is needed is an ambitious reinvigoration of the grand bargain that was struck 40 years ago in the NPT. The renewed grand bargain will need to combine steps that can be taken immediately with a vision for the longer term, and to draw in states that are not parties to the NPT.

The international community has unprecedented opportunities and significant challenges to tackle as the world moves into its seventh nuclear decade. Whether or not the much-heralded “nuclear renaissance” materializes, the use of nuclear technologies throughout the world is certain to increase. They offer immense potential benefits to humankind, but also pose complex and wide-ranging safety and security challenges. Reinforcing the IAEA is a vital first step towards meeting those challenges.

Ernesto Zedillo, director of the Yale Center for the Study of Globalization, was president of Mexico from 1994 to 2000.