On the surface, China’s gradual transition from Tiananmen-era suppression of dissent to controlled-yet-liberating market economics would seem to hold few lessons for turbulent Iraq. After all, Iraq needs many more resources, including an end to sectarian violence, before even attempting to emulate China’s evolution toward a competitive and developed economy, one achieved through careful management and power politics. As veteran BBC journalist Humphrey Hawksley points out, however, these superficial dissimilarities conceal a powerful lesson for both the US and Iraq: A well-educated diaspora can wield immense influence in pushing its homeland toward prosperous development. In the wake of the Tiananmen massacre in June 1989, the US allowed tens of thousands of Chinese to continue pursuing higher education throughout the US – providing China with a competitive wellspring of talent for implementing market-focused policies as well as a lucrative source of foreign investment from those who remained abroad. Largely barred from entering the US, Iraqi refugees have scattered to neighboring countries in the Middle East, where, if the story of the Palestinian diaspora is any indication, they can expect low paying jobs and little opportunity to develop their skills or learn democratic governance. Hawksley recommends that the US take a good hard look at the impact of its immigration policies on Iraq’s future prospects. The US, increasingly frustrated about Iraq, can provide suitable homes for Iraqis who flee, and perhaps revive a small part of the original mission of Operation Iraqi Freedom by transforming some small part of the nation into a democratic and prosperous oasis in the Middle East. – YaleGlobal

The aftermath of Tiananmen Square in China could hold some lessons for Iraq
Humphrey Hawksley
Thursday, June 7, 2007 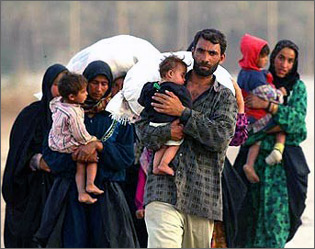 Kept at arm's length: Barred from opportunities in the

AMMAN: Two political processes, underway now for almost 20 years, provide a valuable rear-view mirror with which to navigate foreign policy in years ahead.

One is the development of China since the 1989 Tiananmen Square killings and the other is that of Iraq after its 1990 invasion of Kuwait. Those actions by non-democratic governments sparked international outrage and a demand by many for regime change in both countries.

In Iraq, invasion eventually eliminated the regime. For China, from where tens of thousands of students sought asylum in the West, military intervention was – and still is – unthinkable. 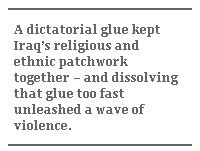 The two narratives are far from over, but when 2 million mainly middle-class, educated Iraqis flee a democracy to find sanctuary with neighboring authoritarian regimes, the debate on how reform should be managed in developing societies changes in many pragmatic ways.

A dictatorial glue kept Iraq’s religious and ethnic patchwork together – and dissolving that glue too fast unleashed a wave of violence. Iraq’s woes raise the question of what might happen in Syria or Saudi Arabia, if invasion, revolution or economic disruption dismantled their institutions overnight.

The question introduces the dangerous concept of removing intervention from the table of political options and giving monstrous regimes the freedom in which to prosper. Yet history has shown that the choice facing Iraqis was between two types of brutality – one caused by a dictator and the other as an unintended consequence of democracy.

The flight of Iraq’s refugees dramatically worsened after the February 2006 bombing of the Shia Al Askari shrine in Samara by Sunni insurgents, causing retaliation by Shia militia.

More than 2 million Iraqis have now fled the country, with 1 million finding sanctuary in Syria, 750,000 in Jordan and up to 150,000 in Egypt. Interestingly, none of these safe-haven countries is a functioning democracy. By March 2007, the US had taken in less than 500, and agreed to accept only 7,000 over the next year, a fraction of those who have fled.

One Iraqi, who wanted only to be known as Mohammad, waits to join his family in Jordan, and his circumstances are replicated throughout Iraq’s middle classes in the hundreds of thousands. 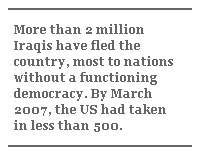 He earns a living taking wedding photographs and saves for the bribe money needed to escape. “I have relatives in Jordan, Egypt, Sweden, Australia and I think the last one reached Canada,” he said. “Last year was bad for all of us. Everyone in my family was behind the idea of democracy. We started off by taking a stand against the insurgents. But we found there was no one to protect us, so we chose to save our lives and the lives of our family.”

For months his cousin, a prominent Iraqi surgeon, and others worked to keep a Baghdad hospital open, despite threats to stop work. When gunmen opened fire on her car, she escaped to the Jordanian capital, Amman. She lives in a cheap apartment and works for little money at a job far below her qualifications.

Whatever happens in Iraq, she has no plans to return, evidence that her country is being drained of the very elements that make up a functioning society.

At a basic level, finding a neighborhood doctor – let alone a surgeon – is now near impossible. Some 12,000 physicians have fled. From turning on a water tap to banking money to educating children, Iraq is a collapsed society.

Yet, even many moderate politicians, elected on a religious platform, hesitate to condemn outright the violence generated within their own communities.

Alaa Makki Abdalrazak, a Sunni member of parliament and doctor, fled to a safer part of Baghdad after Shia militia ransacked his home and clinic. He maintains that the conflict’s victims are mostly Sunnis, while his parliamentary colleague, Layla J Alkhafaji, argues that her Shia community reacts to Sunni attacks.

“If the killing continues," she warns, "we can’t control the people on the streets because it is human nature to defend themselves."

Many suspect that religious communalism has infiltrated the government, thus eroding public trust. While the Shia and Sunni militias might have the muscle to take law into their own hand, minorities such as the Turkoman, Yezidi and Christians are vulnerable, likely to join the diaspora if they can.

Iraq's conflict is becoming neither ideological nor nationalistic, but communal, with centuries of grievance flaring up into slaughter. Its comparisons lie not in one of America’s other defining military missions, Vietnam, but in Sri Lanka, the Balkans and Northern Ireland.

The Sri Lankan civil war has raged since 1983. The Balkans are held together with per-capita international troop numbers far higher than those in Iraq. And in Northern Ireland a workable peace was delivered in May this year, after more than 30 years of conflict and then only by two extremist leaders from the Protestant and Catholic power blocks.

Given those scenarios, either Iraq’s war will continue unchecked, international troops will remain in large numbers for decades or extremists will join the mainstream political process and renounce violence, which may not be possible for years.

The country’s long-term hope may lie in the eventual return of its diaspora bringing back skills and funds. Money from the Chinese diaspora, for example, makes up a large part of the billions of dollars being invested into China.

Although post-Tiananmen China and post-invasion Iraq do not compare in many ways, youth in both countries could play a role in reform.

In 1989, when Western democracies mourned the lives of massacred students in Beijing, the Chinese leadership was plugging a power vacuum. Uncontrolled forces with competing allegiances were on the brink of causing war, famine and an unprecedented outflow of refugees that would have destabilized the Asia Pacific region.

Far from apologizing for the Tiananmen Square killings, China took sanctions on its chin, ruled rebellious regions like Buddhist Tibet and Muslim Xinjiang with iron hand, concentrated on its economy and remains convinced that its path was the right one.

Yet, beneath public differences over Tiananmen, China and the US did agree in one area. Both nations allowed young Chinese access to an American education.

Some half million Chinese have studied abroad, mostly in the US, where 60,000 a year pursue postgraduate studies alone. While millions of Iraqis beg for sanctuary in the US, tens of thousands of Chinese obtain US visas for studies, business and holiday travel.

Far from clambering for asylum, most return home with ideas of globalization, wealth creation and reform, the exact skills needed to run new institutions in a modernizing society.

For almost 20 years, the US has denied Iraqis such a chance. From 1990, sanctions restricted travel and education, and now, a myriad of bureaucratic hurdles, partly created by the post-9/11 security measures, stop Iraqi students going to America.

If China’s reform is coming about partly because America is educating its younger generation, then this policy should be vigorously extended to other one-party states functioning with oppression and violence.

It could start with North Korea, Myanmar, Zimbabwe and – off the Florida shoreline – Cuba, where Castro’s regime strikes an emotional chord across America.

But most immediately, it should start by sending a clear message of alliance to Iraqi refugees now camped around the Middle East, knocking on America’s door for sanctuary. Tiananmen was of China’s own making as is its lingering authoritarian rule. Yet America takes in those refugees who then return to help reform China.

Iraqi refugees are fleeing from the mayhem that the US intervention unleashed. They, too, must be looked after because one day they may offer the bricks to build a peaceful and democratic Iraq.

Humphrey Hawksley, a former BBC Beijing correspondent, is the author of “The History Book.” His reports from Iraq can be seen on BBC World.