Toward a Virtual Caliphate

What does globalization mean for the politics of authority in the Islamic world? Talk of transnational Islamic movements challenging the status quo of Muslim nation-states often brings to mind the destructive extremism of al-Qaida. Peter Mandaville, however, reports that transnational networks of religious scholars – led by figures such as Qatar-based Yusuf al-Qaradawi – have sought in recent years to argue for a moderate, yet Islamically-authentic, alternative to al-Qaida's extreme radicalism. Seeking to create harmony amongst often-fractious Muslim communities, these globalizing religious leaders may also create a key opportunity for dialogue and engagement between Islam and the rest of the world. While the West may not always like everything they have to say, argues Mandaville, it would be far worse to ignore them or cast them as part of the problem. – YaleGlobal

Toward a Virtual Caliphate

Al-Qaida is not the only Muslim group harnessing the power of globalization
Peter Mandaville
Thursday, October 27, 2005 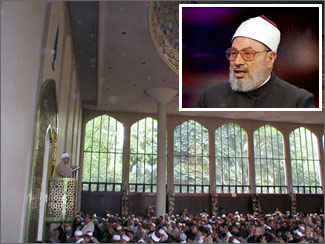 ARLINGTON, Virginia: The recent "Zawahiri- Zarqawi Letter" – purportedly a missive on strategy and tactics from Al-Qaida's #2 to their man in Iraq – once again raises the question of bin Laden's capacity to inspire and animate Islamist radicalism across borders and continents. All the more so when considered in light of the July bombings in London and renewed attacks in Bali, Indonesia.

While questions persist about the authenticity of the letter, it nevertheless provides an opportunity to reconsider the larger question of how Islamic religious authority functions in a globalized world. While many hold up the specter of al-Qaida as a de-territorialized "brand name" seeking to rally the masses of the umma (the world community of Muslims) around militant religious radicalism, al-Qaida is not the only game in town in terms of the transnational forces competing for Muslim hearts and minds. Indeed, it is possible today to point to an emerging infrastructure – on the internet and satellite television, in widely-circulated books, through major international conferences and research centers – of a countervailing effort by mainstream Islamic scholars to challenge al-Qaida's global rhetoric.

In Islam's Sunni tradition, to which approximately 90 percent of the world's Muslims adhere, there is no formal or centralized structure of religious authority, as in the Catholic Church. Instead, a variety of local religious scholars and specialists in shariah (religious law) compete with regional and – increasingly – global voices of religious authority.

Historically, Muslim states and dynasties have often relied on cadres of co-opted religious scholars for political legitimacy. At other times, religious scholars have played important civil societal roles in checking the excesses of state power. Until 1924, however, there was in the Sunni tradition a nominal global figurehead in the person and office of the caliphate. The caliph ("successor" to the Prophet Muhammad) was understood to be the worldly guardian of a divine moral order. Not in any sense a cleric, the office of the caliph – whose theoretical jurisdiction extended to all lands under Muslim rule – is better understood as fulfilling the executive branch function of implementing and preserving the law.

The issue of the caliphate provides a valuable space in which to explore the question of contemporary globalization and religious authority. This is not only because a number of Islamic political movements (Al-Qaida among them) aim to re-establish caliphate institutions, but also because wider debates about the waning influence of the nation-state under globalization may render such models of transnational religious polity more attractive.

Perhaps most interesting, however – but certainly least noticed – is a diverse body of "superstar" religious scholars whose efforts might serve as a more metaphorical embodiment of the caliphate. For this group, the caliphate is not so much a political institution attached to sovereign territory, but rather an ideal of pan-Islamic ecumenicism – a moderate and relatively inclusive form of lowest-common-denominator orthodoxy. In their minds, this community of shared knowledge and religious interpretation is explicitly designed as an antidote to bin Laden and the radical jihadis. Given the means of its establishment and propagation, such a tendency might perhaps best be thought of as a "virtual caliphate."

The figure at the forefront of this movement is Yusuf al-Qaradawi, a Qatar-based Egyptian religious scholar who trained at the venerable institution of Al-Azhar in Cairo – the Oxford of the Islamic religious sciences. In recent years, he has sought to articulate a more cosmopolitan understanding of Islam that speaks to the unique problems of the modern world while remaining firmly grounded in the traditions of Islamic law and scholarship. Qaradawi became a household name in the Arabic-speaking world during the 1990s through his popular al-Jazeera program "Islamic Law & Life," in which he directly engaged issues such as medical technology and sexuality. His approach also gained him a strong constituency outside the Arab world; in the last five years, translations of his books have consistently been top sellers in Islamic bookstores around the world.

Qaradawi's greatest contribution lies not in his ideas, but rather in the institutions he has created and the cross-national collaborations he has fostered among Islamic scholars. Qaradawi has helped to develop a sustainable infrastructure for the growth and propagation of cosmopolitan traditionalism through a global network of websites (such as the popular Islam Online) and regionally based research and outreach centers (of which the European Council for Fatwa and Research in Ireland is the best known). He played a key role in the establishment of the International Association of Muslim Scholars, a network of leading representatives from various Islamic schools of thought, orthodox and heterodox alike, seeking to counter radical Islamists who claim to monopolize authentic Islam.

But what is the actual content of this new approach? What are its goals? Its pronouncements and fatwas underscore the importance of emphasizing the similarities, rather than differences, among Islamic schools of thought. Likewise, the scholars have also condemned attempts by radical groups to declare Muslims who do not agree with them to be apostates to the faith. Qaradawi refers frequently to the Quranic injunction against extremism and the emphasis on Muslims as a moderate community of the middle (Quran 2:143).

And it is here that many of his critics would claim that Qaradawi and his associates do not go far enough. They want to see, for example, stronger denunciation of terrorism and the rejection of threats against Jews and non-Muslims – and perhaps also a stronger emphasis on the need for Muslims to co-operate with the West. In doing so, however, they miss the point. The simple fact is that policymakers in the West – and progressive liberals more generally – are not always going to agree with the opinions of Qaradawi et al. Even very open-minded followers of orthodox scripturalism in Islam will often tend toward social conservatism, meaning that there will continue to be tensions regarding homosexuality and the role of women. It will also be difficult to find complete agreement with the West on more immediate political and security issues. While Qaradawi has strongly and consistently condemned bin Laden and Al-Qaida terrorism, his pronouncements on the insurgency in Iraq and the use of violence by Palestinians have certainly been at odds with Washington.

That said, however, perhaps the worst thing the West could do is to cast figures such as Qaradawi as part of the problem simply because his views don't precisely correspond with US goals. Since 9/11, the United States has appeared to want to do business only with hand picked and officially approved "good Muslims" – that is, to work with Muslims who fit US requirements as to what Islam should be. The problem, of course, is that the figures and groups who carry Washington's seal of approval often have little to no legitimacy among the constituencies the US wants to influence.

Viewed in the big picture and over the longer term, one has to wonder whether US goals and those of the emergent "virtual caliphate" might not overlap more than they diverge. After all, a vote for Qaradawi is a vote against Zarqawi. While increased recruitment into the Qaradawi camp will not by any means produce a generation of Muslims favorably predisposed to US foreign policy, it will represent a consolidated, critical mass of influential and respected Muslims with whom meaningful dialogue with the hope of tangible progress can take place.

Peter Mandaville, Director of the Center for Global Studies and Associate Professor of Government & Politics at George Mason University, is the author of Transnational Muslim Politics: Reimagining the Umma. The themes in the present piece are more fully explored in his forthcoming book Global Islam.