Trees, by absorbing carbon and providing shade, help protect the environment from climate change. Flooding, droughts, extreme temperatures, disease and insects are taking their tolls on trees that can live a century or more as climate changes more rapidly than trees can adjust. “Most trees can migrate only as fast as their seeds disperse – and if current warming trends hold, the climate this century will change 10 times faster than many tree species can move, according to one estimate,” reports the New York Times. “The dark synergy of extreme weather and emboldened pests could imperil vast stretches of woodland.” The US National Forest oversees projects that aim to protect and diversify forests, including planting species in northern rather than traditional regions. Human intervention in nature such as assisted migration is always worrisome. Some worry about unintended consequences for native species still in place. The article describes projects in Rhode Island, Minnesota and Indiana. One owner of a hardwood firm points out that industrial land managers, foresters and real estate investment trusts, or REITS, focus on short-term profits and fail to plan for climate change. Societies can expect to confront tough choices on which species to save. – YaleGlobal

Read the article from the New York Times about efforts to help trees survive climate change.

The World Bank and Food and Agriculture Organisation monitor the decline or expansion of forests for each country. 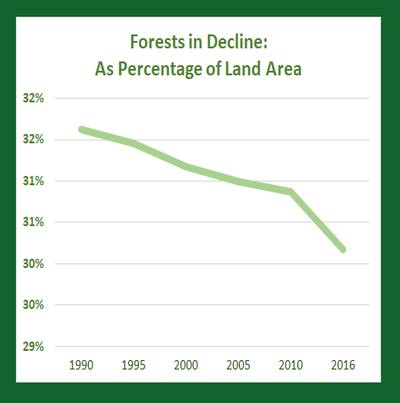