Congress approved a resolution that would have ended US support for the Saudi-led war Yemen – and Donald Trump issued a veto. Many analysts view the civil war in Yemen as a proxy war between Saudi Arabia and Iran to constrain the other’s regional influence. The resolution had won support from both Republican and Democrats, with the Washington Post noting, “the Saudi-led effort, which has targeted civilian facilities and prevented aid shipments from getting to Yemenis, has been faulted by human rights organizations for exacerbating what the United Nations has deemed the world’s worst humanitarian catastrophe.” The administration, in opposing the war-powers resolution, argued it would limit the president’s authority as commander in chief and threaten US lives. The administration also does not connect its support for Saudi efforts in the war with CIA suggestions that the Saudi crown prince ordered the murder of journalist Jamal Khashoggi. Trump had campaigned against “endless wars,” and congressional leaders likewise sense opposition from constituents. Overriding a veto would require a two-thirds vote by the House and the Senate, with the Senate pointing out that has happened with less than 10 percent of all presidential vetoes. – YaleGlobal

Read the article from the Washington Post about the presidential veto of a congressional resolution to end US involvement in the Yemen War.

Felicia Sonmez is a national political reporter covering breaking news from the White House, Congress and the campaign trail. Josh Dawsey is a White House reporter for The Washington Post. He joined the paper in 2017. Karoun Demirjian is a congressional reporter covering national security, including defense, foreign policy, intelligence and matters concerning the judiciary. 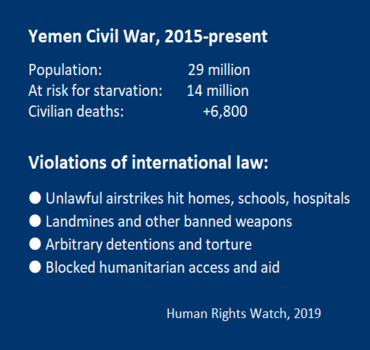 Read more about the Yemen War from the Congressional Research Service:

“There is some disagreement between some in Congress and the Trump Administration as to whether U.S. forces assisting the Saudi-led coalition have been introduced into active or imminent hostilities for purposes of the War Powers Resolution (50 U.S.C Ch. 33). Some Members have claimed that by providing support to the Saudi-led coalition, U.S. forces have been introduced into a ‘situation where imminent involvement in hostilities is clearly indicated’ based on the criteria of the War Powers Resolution. The Trump Administration disagrees. The U.S. Defense Department has maintained that ‘the limited military and intelligence support that the United States is providing to the KSA-led coalition does not involve any introduction of U.S. forces into hostilities for purposes of the War Powers Resolution.’”

Reuters: Why Yemen Is at War