Donald Trump counts on tariffs as a tool for convincing other nations to do his bidding. He vows to target Mexico unless it reduces the number of undocumented immigrants and asylum seekers crossing the southern border, imposing tariffs of 10 percent as of June 10 and rising to 25 percent in October. Mexico had shifted to the top US trade partner in goods after Trump imposed tariffs on China. “Trump’s move dramatically escalates his battle to control a wave of tens of thousands of asylum seekers, including many Central American families fleeing poverty and violence, that has swelled alongside his promises to make it harder to get U.S. refuge and his efforts to build a wall on the Mexican border,” reports Reuters. “The announcement rattled investors who feared that worsening trade friction could hurt the global economy.” Trade with Mexico and Canada, while imbalanced, has created many US jobs. Mexican President Andres Manuel Lopez Obrador responds that Mexico does its utmost to control migration without violating human rights. Foreign Minister Marcelo Ebrard urged the United States to address the root causes of immigration including poverty, changing climate, as well as military, police and gang violence. Business loathes the abrupt turns in policies and uncertainty, with little concern about the consequences. – YaleGlobal

Trump threatens tariffs on Mexico, now a top US trade partner for goods, starting June 10 if the nation does not reduce illegal border crossings into the US
Steve Holland and Frank Jack Daniel
Friday, May 31, 2019

Read the article from Reuters about Trump’s threat of tariffs for Mexico. 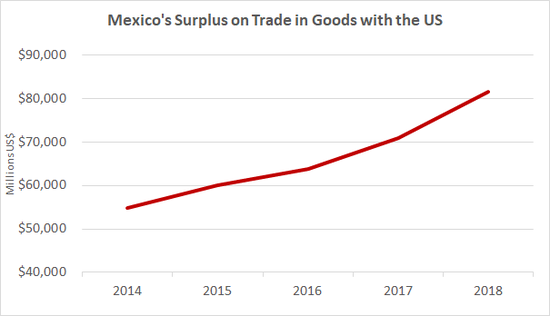 (All figures are in millions of US dollars on a nominal basis, not seasonally adjusted unless otherwise specified. Data source: US Census Bureau) 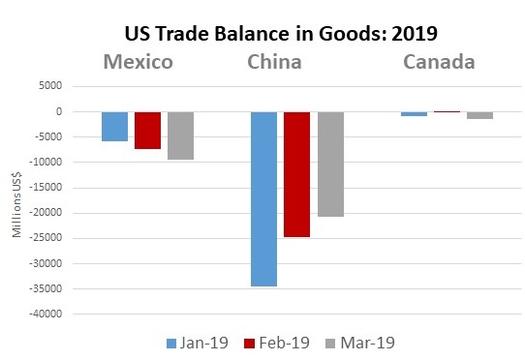 (All figures are in millions of US dollars on a nominal basis, not seasonally adjusted unless otherwise specified. Data source: US Census Bureau)

10 Quick Facts on US Trade

Why Do People Oppose Globalization?

Mexico Can Thrive Without Trump