Recent suggestions by Secretary of State Hillary Clinton that North Korea could be re-listed as a state sponsoring terrorism raises the prospect of further tightening the economic noose around the regime. North Korea has got nuclear weapons but needs funds to keep the regime afloat. Yet, normal trading partners are loathe to transact with the pariah state subject to international sanctions. Hence Pyongyang’s search for innovative means to earn hard currency. North Korea’s ability to counterfeit high-quality US dollar bills is known, but less known is its skill in digging tunnels. In the first of this exclusive series on North Korea’s money-making ventures, journalist and author Bertil Lintner reveals how North Korea has been secretly helping Burma – another pariah regime – to build an extensive tunnel network as emergency shelter and for other unknown purposes. Lintner has obtained the first ever images of this secret tunnel building effort along with photos of foreign advisers, almost certainly from North Korea. Lintner’s research also shows that apart from Burma, the buyers for North Korean tunneling technology possibly include Hezbollah in Lebanon. As the Israelis and the UN found out in Lebanon, such technology appeared to be of high quality: tunnels ran as deep as 40 meters, sometimes located only 100 meters away from adversaries, and offered amenities like electricity, ventilation, and running water. Payments are made in gold or barter, any store of value North Korea can use. While one can marvel at North Korea’s capitalist ingenuity, its future prospects do not appear to be great as the number of regimes and business partners desperate or adventurous enough to seek North Korea’s help is in decline. – YaleGlobal 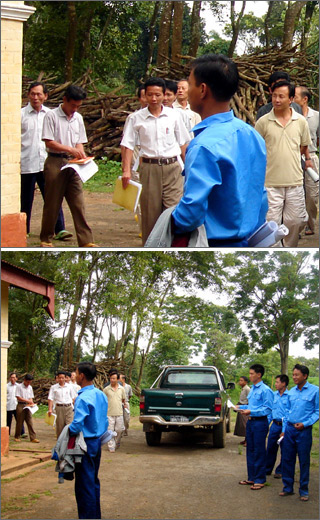 BANGKOK: Missiles and missile and nuclear technology, counterfeiting money and cigarette smuggling, front companies and restaurants in foreign countries, labor export to the Middle East – North Korea has been very innovative when it comes to raising badly needed foreign exchange for the regime in Pyongyang. But there is a less known trade in service that the North Koreans have offered to its foreign clients: expertise in tunneling. A fascinating new glimpse of this business has now been offered in secret photos from Burma obtained by this correspondent.

The photos, taken between 2003 and 2006, show that while the rest of the world is speculating about the outcome of long-awaited elections in Burma, the ruling military junta has been busy digging in for the long haul – literally. North Korean technicians have helped them construct underground facilities where they can survive any threats from their own people as well as the outside world. It is not known if the tunnels are linked to Burma’s reported efforts to develop nuclear technology – in which the North Koreans allegedly are active as well. (See Burma’s Nuclear Temptation).

The photographs published here show that an extensive network of underground installations was built near Burma’s new, fortified capital Naypyidaw. In November 2005, the military moved its administration from the old capital Rangoon to an entirely new site that was carved out of the wilderness 460 kms (300 miles) north of Rangoon.

Meaning the “Abode of Kings,” Naypyidaw is meant to symbolize the power of the military and its desire to build a new state based on the tradition of Burma’s pre-colonial warrior kings. But underground facilities were apparently deemed necessary to secure the military’s grip on power. Additional tunnels and underground meeting halls have been built near Taunggyi, the capital of Burma’s northeastern Shan State and the home of several of the country’s decades-long insurgencies. Some of the pictures, taken in June 2006, show a group of technicians in civilian dress walking out of a government guesthouse in the Naypyidaw area. Asian diplomats have identified those technicians, with features distinct from the Burmese workers around them, as North Koreans.

This is quite a turn around as Burma severed relations with Pyongyang in 1983 after North Korean agents planted a bomb at Rangoon’s Martyrs Mausoleum killing 18 visiting South Korean officials, including the then-deputy prime minister and three other government ministers.

Secret talks between Burmese and North Korean diplomats began in Bangkok in the early 1990s.The two sides had discovered that despite the hostile act in the previous decade they had a lot in common. Both had come under unprecedented international condemnation, especially by the US, because of their blatant disregard for the most basic human rights and Pyongyang for its nuclear weapons program. Burma also needed more military hardware to suppress an increasingly rebellious urban population as well as ethnic rebels in the frontier areas. North Korea needed food, rubber and other essentials – and was willing to accept barter deals, which suited the cash-strapped Burmese generals. "They have both drawn their wagons in a circle ready to defend themselves," a Bangkok-based Western diplomat said. "Burma’s generals admire the North Koreans for standing up to the United States and wish they could do the same."

After an exchange of secret visits, North Korean armaments began to arrive in Burma. The curious relationship between Burma and North Korea was first disclosed in the Hong Kong-based weekly Far Eastern Economic Review on July 10, 2003. A group of 15-20 North Korean technicians were then seen at a government guesthouse near the old capital Rangoon. The report was met with skepticism, especially because of the 1983 Rangoon bombings. But, when North Korean-made field artillery pieces were seen in Burma in the early 2000s, it became clear that North Korea had found a new ally – several years before diplomatic relations between the two countries were restored in April 2007.

"While based on a 1950s Russian design, these weapons [the field guns] were battle-tested and reliable," Australian Burma scholar Andrew Selth stated in a 2004 working paper for the Australian National University. "They significantly increased Burma’s long-range artillery capabilities, which were then very weak." Since then, Burma has also taken delivery of North Korean truck-mounted, multiple rocket launchers and possibly also surface-to-air missiles for its Chinese-supplied naval vessels.

Then came the tunneling experts. Most of Pyongyang’s own defense industries, including its chemical and biological-weapons programs, and many other military as well as government installations are underground. This includes known factories at Ganggye and Sakchu, where thousands of technicians and workers labor in a maze of tunnels dug under mountains. The export of such know-how to Burma was first documented in June 2006, when intelligence agencies intercepted a message from Naypyidaw confirming the arrival of a group of North Korean tunneling experts at the site. Today, three years later, the dates on the photos published today confirm the accuracy of this report. By now, the tunnels and underground installations should be completed, as would those near Taunggyi. This well-hidden complex ensures there is no danger of irate civilians storming government buildings, as they did during the massive pro-democracy uprising in August-September 1988. Sources say that the internationally isolated military junta may also consider these deep bunkers as their last repair in case of air strikes of the kind that the Taliban in Afghanistan or Saddam Hussein regime in Iraq endured.

It is not clear how much, or what, Burma has paid for the assistance provided by the North Korean experts, but it could be food – or gold, which is found in riverbeds in northern Burma. Or some other mineral. Burma, of course, is not the only foreign tunneling venture by North Korea.

In southern Lebanon following the 2006 war, Israel’s Defense Forces and the United Nations found several of the underground complexes, which by then had been abandoned by Hezbollah militants. By coincidence or not, these tunnels and underground rooms – some big enough for meetings to be held there – are strikingly similar to those the South Koreans have unearthed under the Demilitarized Zone that separates South from North Korea. Under small, manhole cover-sized entrances hidden under grass and bushes were steel-lined shafts with ladders leading down to big rooms with electricity, ventilation, bathrooms with showers and drainage systems. Some of the tunnels are 40 meters deep and located only 100 meters from the Israeli border. North Korea’s possible involvement in digging these tunnels is however, difficult to ascertain. According to Israeli investigative journalist Ronen Bergman, a senior officer in the Iranian Revolutionary Guards, who had defected to the West, revealed that, "thanks to the presence of hundreds of Iranian engineers and technicians, and experts from North Korea who were brought in by Iranian diplomats…Hezbollah succeeded in building a 25-kilometer subterranean strip in South Lebanon."

Beirut sources suggest that it is more likely that Hezbollah has used North Korean designs and blueprints given to them by their Syrian or Iranian allies – both of whom are close to the North Koreans. (Both Iran and Syria have acquired missile technology from North Korea, and what was believed to be a secret nuclear reactor in Syria built with North Korean help was destroyed by the Israeli air force in September 2007.) Either way, North Korean expertise in tunneling has become a valuable commodity for export. And Pyongyang is flexible about the method of payment as long as it helps the international pariah regime.

Bertil Lintner is a Swedish journalist based in Thailand and the author of several works on Asia, including “Blood Brothers: The Criminal Underworld of Asia” and “Great Leader, Dear Leader: Demystifying North Korea under the Kim Clan.” He can be reached at lintner@asiapacificms.com