While the current set of US legislators do not agree on much, the Senate unanimously passed a resolution recognizing the Armenian Genocide, 1915 to 1923. As the Ottoman Empire declined and World War I began, Turkey sided with Germany and accused Armenians of supporting Russia. Targeted by Turks, as many as 1.5 million Armenians died during the period. US President Donald Trump opposed the resolution, and Turkish President Recep Tayyip Erdogan rejects the use of the term “genocide.” Both the United States and Turkey are NATO members. During a television interview, Erdogan said Ankara may close two bases in Turkey, Incirlik and Kurecik, which host US soldiers. Erdogan lashed out at racism and colonialism and referred to other historical atrocities, including massacres of American Indians and enslavement of Africans. “Ankara has repeatedly proposed the creation of a joint commission of historians from Turkey and Armenia plus international experts to examine the issue,” reports Anadolu Agency. Erdogan also addressed oil and gas reserves in the Eastern Mediterranean. Turkey has signed memorandums of understanding with Libya on rights and rejected unilateral drilling in the area by the Greek Cypriot administration. Meanwhile, Turkey works on another defense deal with Russia. – YaleGlobal

Read the article from Anadolu Agency about the Turkish president’s pushback on a US resolution recognizing Armenian genocide in 1915. 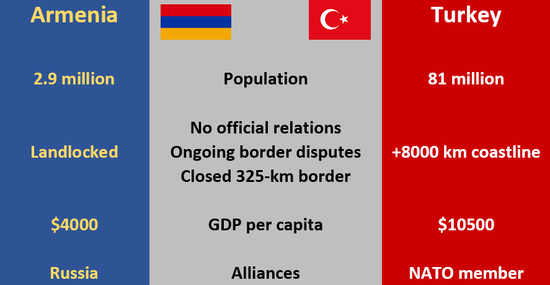 The Russian-Turkish Rapprochement Could Benefit Armenia