Kurdish forces were key to defeating Islamic State extremists in northern Syria. The ethnic group is a sizable minority in Iran, Iraq and Turkey. But Turkish leaders regard Kurdish hopes for autonomy and their own country as a terrorist endeavor. The US president announced a withdrawal of US forces from the border region, despite questions about the welfare of Kurdish allies known as the Syrian Democratic Forces. Meanwhile, Turkey explains that the US has transferred “leadership” of the anti-ISIS campaign to Ankara. Turkey makes plans with Russia to take control of the border area and return millions of refugees to Syria, describing it as a “peace operation.” Officials urge “the international community to assist efforts to stabilize the conflict-hit region” and prevent a “terrorist corridor,” reports Hürriyet Daily News. Turkey claims plans for a “safe zone,” including infrastructure investment in northern Syria and establishment of local governing councils, including some led by Kurds in Kurdish-majority areas. Turkey could end up suffering, and US leaders promise harsh sanctions if the Kurds are mistreated. Attacks on such a large and determined minority group could trigger radicalization, violence and instability in both Syria and Turkey. The US and Turkey are both NATO members. – YaleGlobal

Per Turkey, US reliance on Kurdish forces to combat ISIS terrorists was “tactical”; Turkish plan to control of northern Syria could trigger domestic unrest
Wednesday, October 9, 2019

Read the article from Anadolu Agency and Hürriyet Daily News.

Reports suggest that Turkish airstrikes on Syria have begun. 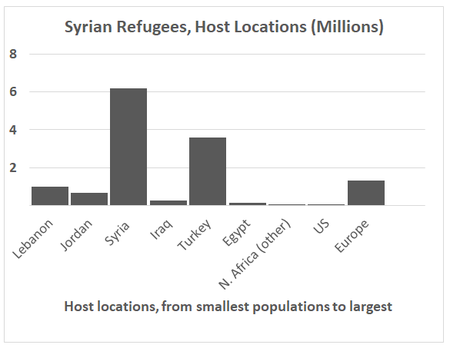 Displaced: The civil war in Syria has disrupted life for millions of Syrian families and individuals (Source: World Vision and Pew Research)