The Syrian government's indiscriminate air raids, backed by Russian airpower, aim to crush opposition forces in Idlib. The attacks killed more than 30 Turkish troops. “The toll is the deadliest suffered by the Turkish army since it intervened in Syria in 2016 and is raising fears of a direct confrontation between Turkey and Russia on the battlefield,” reports Al Jazeera. By one rescue worker’s report, the “government air raids on Idlib's second largest city - Maaret al-Numan - are so severe his colleagues and medical relief groups are not able to access the area.” More than 500,000 people have fled Idlib in recent weeks. Jens Stoltenberg, NATO's secretary-general, calls for Russia and Syria to stop the offensive. Greece and Bulgaria tighten border controls, and one Turkish official anonymously suggested the country no longer blocks Syrian refugees headed for Europe. “The move would reverse a pledge Turkey made to the EU in 2016 and could draw Western powers into the standoff over Idlib and stalled negotiations between Ankara and Moscow,” Al Jazeera reports. Turkey has not given official notice to Europe. The United Nations calls for an immediate ceasefire. – YaleGlobal

Read the article from Al Jazeera about the Syrian government’s air raids in Idlib. 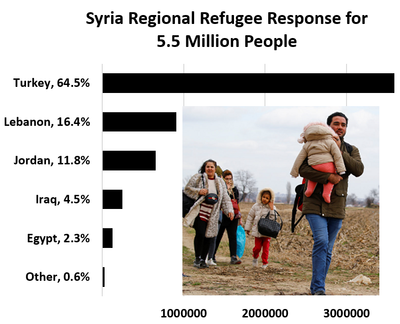