US congressional committees gather evidence against the US president, focusing on a July 25 telephone call with Ukraine’s president. Testimony reveals that multiple officials expressed concerns to their superiors about the call after Trump suspended military aid to the country under siege by Russia, with some officials urging Ukrainian counterparts to investigate a political opponent. “Bill Taylor’s claims have to be taken seriously, as they paint a specific and damning portrait of an administration willing to disregard and even shut out the secretaries of defense and state, the CIA director, and the national-security adviser on a key decision made in secret,” suggests Jim Geraghty for National Review, adding that corroboration is required although the White House ordered staff not to cooperate with the impeachment inquiry. Taylor is the chargé d'affaires of the U.S. embassy in Kiev. Geraghty goes on to explain how the president could have relied on a legal process to withhold the aid, which was eventually released September. “Based upon what we know now, it appears the president and his top staff tried to withhold the aid in secret, in defiance of Congress, and in defiance of the advice of his top national-security officials. Refusing to distribute funds that Congress had authorized and appropriated would be a violation of the separation of powers; the president cannot decide to simply refuse to carry out funding decisions of Congress and not tell anyone.” The impeachment inquiry could lead to obstruction charges for every official who refuses to cooperate. – YaleGlobal

Testimony by a series of US government officials raise questions about the legality of a July 25 telephone call between the US and Ukrainian presidents
Jim Geraghty
Tuesday, October 29, 2019

Read the article from National Review about testimony for the impeachment inquiry by US Congress.

Jim Geraghty is the senior political correspondent of National Review.

Read about testimony from Gordon Sondland, Bill Taylor, Fiona Hill, Laura Cooper and Alexander Vindman.as well as a non-verbatim transcript of the July 25 telephone call between US President Donald Trump and Ukrainian President Volodymyr Zelensky and the original whistleblower complaint. 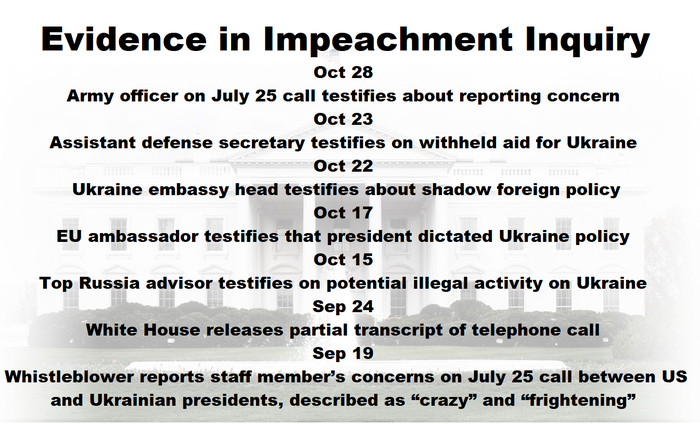