The United Nations is running a deficit of $230 million and has stopped hiring, slashed travel and cancelled meetings due to funding shortages resulting from members failing to pay annual dues in a timely way. “The organization uses factors including a country’s economic size and wealth to assess its ‘capacity to pay’ and determine its annual bill,” reports David Bosco for the Washington Post. US dues represent 22 percent of the UN’s budget and total more than $600 million for 2019, whereas the world’s poorest nations pay $30,000. Due to its fiscal calendar, the US is often late with its payment. And while many members have historically withheld dues after disagreements over specific UN decisions or operations, the Trump administration has been more general in its insistence that the United States bears excessive global responsibility. Some onlookers expect the country to attempt renegotiating its payment. The UN is considering increasing its reserve accounts, flexible budgeting along with additional consequences for nonpayment with a lower debt threshold. – YaleGlobal

Almost a third of UN members, including the United States, have yet to pay 2019 membership dues
David Bosco
Tuesday, October 15, 2019

Read the article from the Washington Post about the United Nations’ struggle to collect membership dues.

David Bosco is an associate professor at Indiana University’s Hamilton Lugar School of Global and International Studies. He is author of Five to Rule Them All: the UN Security Council and the Making of the Modern World (Oxford University Press, 2009). 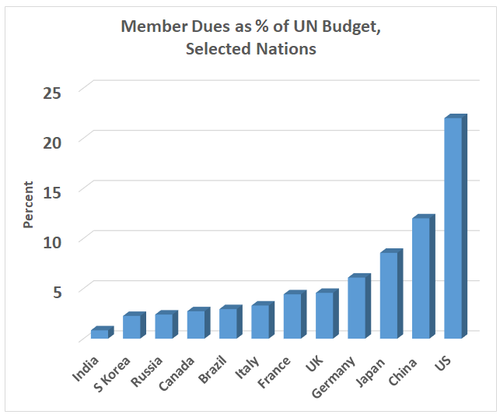 The UN posts an Honor Roll of members who pay dues in a timely way (Source: UN, December 2018)

Rights and Policies on Gender and Identity

The Not So United Nations