Europeans shrugged about a credit crisis in 2008, chalking it up to a lavish American lifestyle, dependent on debt, and assumed they were immune. But national economies are tightly connected, particularly those of the European Union, and crisis spread quickly. Compounding the financial crisis is seething anger over closed factories, long unemployment lines, banks that lost rather than protected money, and politicians who fail to deliver confident solutions. “Though globalization has greatly benefited European companies, open borders and free trade elide with the toxic financial waste in a broad brush rejection of the past decade,” writes author Jonathan Fenby for YaleGlobal. Citizens demand immediate solutions for imbalances long in the making. But the solution is not in favoring less-skilled domestic workers or inefficient firms, urging banks to limit international lending or toying with protectionist policies that discourage cooperation. – YaleGlobal 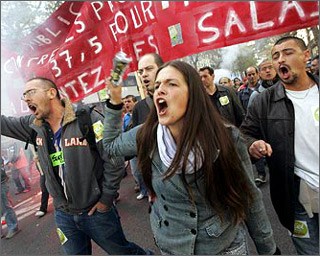 PARIS: Buffeted by the worst recession in 50 years, the biggest and most successful pan-national venture of our time – the European Union – is in danger of unraveling. There’s growing fear that the whole European project may be damaged as protectionist pressures mount and the downturn sharpens differences among countries. Countries that rubbed along when the going was good now find themselves scrambling for national solutions in place of a collaborative effort. Papering over cracks that always marked the European club becomes steadily more difficult as companies close, jobless queues lengthen, banks report record losses and the public calls for solutions that escape politicians.

Safeguarding national interests, as leading EU governments attempt, as opinion poll ratings fall and popular protests emerge, can easily shade into protectionism. This would undermine the single European market and the supposedly level playing field at the base of the 27-nation community, with the bigger members letting smaller, weaker economies, some recent members, crash into the wall. Easing financial rules is a natural reaction in hard times, but could undermine the regulations governing the euro common currency, to the delight of some EU leaders who have long resented the iron hand of the central bank in Frankfurt. Growing antipathy to workers from the new member nations could damage the EU’s open-door policy.

It’s now plain that European governments failed to appreciate the scale and depth of the crisis; the assertion to parliament last year by British Prime Minister Gordon Brown that British banks had been saved – by a slip of the tongue he said the world had been saved – has become a bad joke with a string of worsening results from the City of London, topped by a £10 billion loss for the HBOS bank, taken over by Lloyds last autumn. The initial schadenfreude of mainland Europe towards the “Anglo-Saxon neo-liberals” of the US and Britain has been replaced by something close to panic as the crisis spreads from the financial world to the real economy.

If Brown’s reputation as the economic manager has taken a nasty drubbing, events have turned the electoral promises of economic liberalization from France’s President Nicolas Sarkozy on their head. The German model looks vulnerable to the downturn in world trade, with a 2.1 percent contraction in gross domestic product for the last quarter of 2008, the sharpest drop since reunification in 1990. France, Italy and Spain also recorded much bigger GDP declines than expected during the same quarter.

The euro common-currency zone countries face their worst recession with GDP dropping by 1.5 percent in the fourth quarter of 2008. The bond market reflects concern about state finances in Spain, Portugal, Italy, Ireland and Greece. Unemployment is rising and, according to some estimates, may go up by 50 percent this year.

Adding to the threat of this economic and financial fog enveloping Europe is the rise of popular anger, especially with elections due in Germany and Britain in 2010. 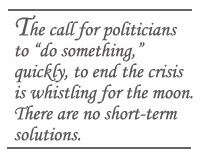 The ire against bankers is spreading with riots in Greece, Latvia, Lithuania and Bulgaria. Trade unions claim to have convinced a million people to join a January national protest in France, called against Sarkozy’s policies, but couched in the broader context of the downturn as marchers identified the president with forces costing jobs and security expected from government. Though globalization has greatly benefited European companies, open borders and free trade elide with the toxic financial waste in a broad brush rejection of the past decade.

The call for politicians to “do something,” quickly, to end the crisis is whistling for the moon. There are no short-term solutions. But it’s not a demand which government leaders can ignore, and the deeper danger rests in their reaction. Speaking at a February 13 meeting of the Group of Seven finance ministers in Rome, German minister Peer Steinbrück warned that protectionist measures could turn a financial crisis into a re-run of the 1930s disasters. Indeed, there are disturbing signs of rising populist protectionism. 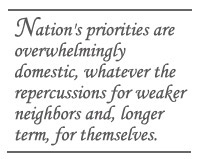 Given Sarkozy’s hyper-activism, it’s not surprising that France should be at the eye of the storm after he announced a €6.5 billion aid plan for French automakers, suggesting that they should repatriate production from Central Europe to protect jobs at home. That set protectionist alarm bells ringing in Brussels and brought caustic rejoinders from the Czech Republic, which took over the rotating European Council presidency from France this year and has been annoyed by the French leader’s patronizing remark that Prague was doing the best it could in the job. Nor did the French president help cross-channel relations when he used a television interview to deride the British economic model for depending too heavily in financial services: Downing Street hit back, citing figures showing that manufacturing represents a bigger slice of the British economy than in France. But Sarkozy is far from alone.

German firms have gained an advantage with government measures to reduce non-wage labor costs. An applause-grabbing remark to a Labour Party conference about “British jobs for British workers” has come back to haunt Brown as workers protesting foreign labor brandish placards with his words. Banks in Britain helped by the government are told to lend to the domestic market, not to foreigners. Questioned about this, Chancellor of the Exchequer Alistair Darling responded taxpayers expect this and that other governments should do the same.

Aid packages for French and German banks go against the spirit of EU competition policy. Despite summit meetings and expressions of good will in seeking joint solutions, the actions of major EU countries make it clear that priorities are overwhelmingly domestic, whatever the repercussions for weaker neighbors and, longer term, for themselves. 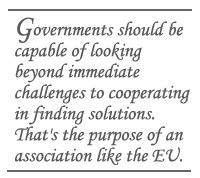 The French leader has long chafed under the budget limits set by the European Central Bank, and governments in countries hard hit by the crisis are likely to agitate for relaxation of rules, even if this brings them into conflict with the Germans. “In a time of economic crisis, we see atavistic instincts emerging,” Czech Foreign Minister Karel Schwarzenberg told the New York Times in mid-February. His country’s Prime Minister, Mirek Topolanek, warned against “beggar-thy-neighbor” policies among the 27 member states and called a EU summit before the end of this month to coordinate policies.

This was meant to be the year when the EU marched on to a new stage in its development, with president of the European Council serving 30 months rather than the present six-month rotation and a newly anointed diplomatic chief giving the community more global clout. Whether that happens is a matter of crystal-ball gazing. All that’s evident is the economic crisis risks tearing holes in Europe’s fabric woven over the last 50 years.

A government should be capable of looking beyond immediate challenges to cooperating in finding solutions. That, one might naively think, is the purpose of an association like the EU. Yet there’s little sign of such action so far. Despite Steinbrück's warning, Europe is not about to revert to the 1930s. But in the conflict between the Union’s broad communitarian ambitions and immediate imperatives bearing down on politicians, it’s clear which is winning, with potentially damaging long-term consequences.

Jonathan Fenby is author of “On the Brink: The Trouble with France” and works for Trusted Sources, a London-based research service.