Unpopular Globalization: Why So Many Are Opposed

The world economy has done well in recent years, yet workers in rich nations remain anxious about how globalization will affect future jobs, wages and benefits. In the US, Ford and General Motors have slashed jobs and closed plants. Plentiful skilled labor in emerging countries raises fears about depressed wages worldwide. More importantly, specific policies and conditions in Europe and the US directly contribute to worries over pension and health plans. For example, the US trade deficit has sprung from the low saving rate, not economic integration and free-trade agreements. Similarly, globalization is not the cause of exorbitant US health care costs or outdated European pension systems. Indeed, free trade does not directly sacrifice jobs; instead, high taxes on employment and trade deficits do far more damage. Some benefits of globalization tend to be unevenly distributed in society – and corporate leaders should recognize that many workers would prefer long-term stability over a chance for short-term wealth. Still, globalization is not the root of all problems. Politicians on both sides of the Atlantic need to be more candid about the source of the insecurity: In the US, consumers and the government must save more, which could mean higher taxes; Europe must reduce benefits and taxes, as well as improve labor flexibility to court younger workers. These are not popular talking points, but protectionist rhetoric is a bad solution to real problems. – Yale Global

Unpopular Globalization: Why So Many Are Opposed

Blaming globalization for workforce anxiety in the US and Europe is misguided
David Dapice
Thursday, February 2, 2006 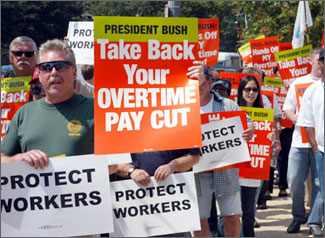 BEDFORD, US: The world economy has performed well in recent years - but the mood in rich nations is uneasy. The reason: While globalization fuels economies, citizens see little gain. They tend to blame globalization rather than specific policies for economic stagnation and growing retirement and health crises. And for politicians seeking to avoid necessary but unpopular policy changes, that is just as well.

Western economies recovered from the burst of the technology bubble and the fallout from the “war on terror.” Unemployment is falling in the US, EU and Japan while inflation remains muted. Gross Domestic Product (GDP) growth rates, corporate profits and stock prices are up.

Yet a recent survey conducted for the World Economic Forum reports that over half of those responding in the EU and nearly two out of five in the US anticipate a bleak economic future. Most economists see growth, trade and global economic integration as threatening some special interests but, on the whole, helping everyone. Still, what if the sum of “special interests” represents the majority? 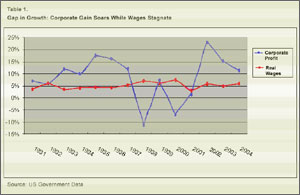 The attitudes in the US – historically an optimistic society, fluid and adaptable – are most surprising. Yet real wages, with all data in constant prices, have fallen from $9 an hour in 1973 to $7.50 in 1993, before rising to $8.25 in 2002 and falling gently since then. Real compensation, which includes fringes such as health insurance, did rise 20% from 1992 to 2005 – but that is only half of the growth in labor productivity, the measure economists use to assess efficiency shown by output per person-hour. Productivity growth has fattened corporate profits, which rose, after taxes, from 5.2% of GDP in 1992 to 7.5% in 2005, tying an all-time record. Corporate profits and executive compensation have also soared. Pundits commonly link these trends with economic integration and free trade agreements. Yet, the trends have more to do with automation, immigration, and the US trade deficit than with globalization per se. The low saving rate in the US workers has created the trade deficit, not free trade.

Likewise, US worries about soaring health care costs are not linked to free trade. Rather, the US health care system is exquisitely inefficient. The US government does not provide universal health care, but ends up spending more per capita on health care than total per capita spending by Canada on its federal health care. Yet 15% of the US population, or more than 45 million, are uninsured, and tens of millions more have inadequate insurance. A Canadian born today can expect to live 80 years; a Costa Rican 78 years; a US baby only 77 years. Out-of-control medical spending threatens to bankrupt corporations and government at all levels. Workers spend ever more of their paychecks on health care as double-digit cost increases eat up meager pay gains. Globalization has little to do with US health care, but certainly influences global business decision: Witness the decision of Toyota to build its new plant in Canada.

In Europe, the health care system is cheaper and produces better outcomes. But the Europeans still worry as jobs go offshore and the graying population complicates the financing of a comprehensive social safety net, thus leading to budgetary pressures for less generous treatment and pessimism about future access. The mood would remain glum even if unemployment rates in Europe fell and private job growth, now weak, improved. Governments promise generous pensions, but with the baby boom-generation retiring, these are becoming less affordable. As with health care, financing these benefits will become unbearable unless older people work longer and pensions are delayed or reduced.

US workers also face retirement uncertainty, with even profitable companies like IBM abandoning defined-benefit pensions. Many companies, such as those in the steel and airlines industries, use bankruptcy as a tactic to eliminate pension obligations. Most workers run their own retirement savings accounts, even though research points out the pitfalls. US Social Security, already modest, is replacing an ever-lower share of previous income, but at least it is certain and indexed to inflation. This bit of certainty might explain why so few supported the reform proposed by President Bush

Perhaps the potential of holding a “good job” poses the greatest uncertainty. US layoffs in many industries continue to make headlines. Manufacturing employment, stable from 1980 to 2000, lost 15% of its workers during the last five years due to foreign competition, and those laid off are not likely to find new manufacturing jobs. Employers even outsource services, though the scale is small, with perhaps 1% of all service jobs affected.

In most of Europe, the pace of private sector job growth has been painfully slow, particularly in Germany. Unemployment rates, though falling, are still in the 8-10% range. The government imposes high taxes to finance the social benefits, including high unemployment compensation. Laying off workers is difficult and expensive. Thus, many firms create new jobs or move old ones to Eastern Europe. The possibility of hordes of immigrant workers snatching jobs that go unwanted by most living in wealthy nations – indeed, the specter of a low-cost Polish plumber helped explain France’s rejection of the EU constitution. – threatens even non-traded sectors.

If the typical worker’s job is insecure, with stagnant wages and uncertain pensions, the voter understandably becomes skeptical of the benefits of global economic integration. It is all well to point out the advantages of low prices evident at any Wal-Mart, but the trade-off is inadequate. It is rational to prefer a stable life even if that comes with a lower return. After all, many people prefer bank accounts to junk bonds. The question, of course, is if such a choice is possible. And if possible, would slowing global integration move the outcomes in a more stable direction?

Most analysis suggests that free trade does not, by itself, destroy jobs. High taxes on employment or high trade deficits – both caused by other factors – can depress employment, or at least discourage creation of “good” jobs. While trade does create benefits such as low prices, and these benefits show up in rising real per capita disposable income in the US, the distribution of benefits is uneven. Most wealth outside of housing is concentrated in the top 10% of the population, and a disproportionate share of the growth in disposable income is due to growing non-wage payments such stock sale and dividends. In other words, buoyed by globalization, corporate income surged while the average citizen had little gain. Indeed, from 1999 to 2004, the share of US households making less than $35,000 a year, in constant prices, rose while those making more than $75,000 fell. This happened while debate about globalization was at its peak, and many associate such shifts with the process. In Europe, many blame globalization for sluggish growth and high unemployment.

If economic integration with the world is not a major cause of these problems, why do politicians resort to protectionist rhetoric? Many do not want to deliver the real message: In the US, both consumers and government need to save more, which would mean less spending or higher taxes. Europe requires cuts in benefits and taxes, along with labor flexibility, to attract younger workers. The few politicians who try modest versions of these messages have not done well with voters. Perhaps someone gifted could sell what is inevitable to the unwilling. But for now, the anxious have misdiagnosed the malady – and the cure will continue to cause hurt.