US Allies, Trump and Syria: Atlantic

The United States withdrew about 50 US Special Forces from Syria in October and “generated a wave of angst across the world about the United States unceremoniously dumping its allies and terminating the international system it has led for more than 70 years,” writes Uri Friedman for the Atlantic. The abrupt, chaotic withdrawal compounded a humanitarian crisis. Hundreds of Kurds have died, more than 100,000 are displaced, and Friedman describes Turkish-backed Syrian militants dragging a 34-year-old Kurdish politician by the hair and shooting her in the face. US abandonment of allies who fought against the Islamic State has shaken European confidence. French President Emmanuel Macron in an interview questioned the lack of NATO coordination. Several nations curbed weapons exports to Turkey and plan to strengthen their own security. Many anticipate more regional conflicts and interference from Russia, China and other powers. Afghanistan anticipates similar withdrawal and chaos. “What these sentiments show is that, despite all the international norms and institutions that have emerged since World War II … ultimately there are no incontrovertible rules, no institutions of last resort, and no world police,” Friedman writes. “There are just leaders, their promises, and what they are actually prepared to do.” A military presence along with clear foreign policy goals, strategies and values shape global perceptions and build influence, suggests a former US official. Friedman concludes wary US allies will demand detailed commitments before supporting future US endeavors. – YaleGlobal

US Allies, Trump and Syria: Atlantic

US allies watched in October as their own worst nightmare – abandonment – befell America’s Kurdish partners in Syria, and they question US standing in the world
Uri Friedman
Friday, November 15, 2019

Read the article from the Atlantic  about US allies’ response to US withdrawing Special Forces from Syria. 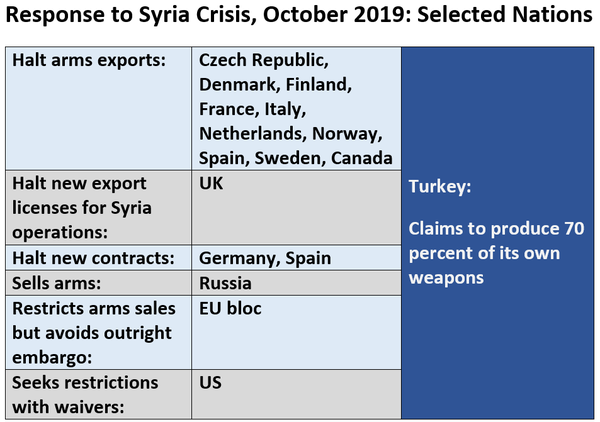 (Source: BBC, Reuters and Inside Defense)

US Retreats From Syria and the Middle East