US and China: Grappling Over Economic Rescue – Part I

Trade imbalances, fueled by overproduction and saving in Asia, too much consumption and debt in the West, have compounded the harsh global recession. Analysts in the US and elsewhere in the West floundering for a remedy have focused on China’s trillion-plus dollar surplus and suggest that an increase in Chinese domestic spending might ease the global pain. This two-part YaleGlobal series suggests that it’s unreasonable to expect China to resolve quickly, on its own, massive imbalances resulting from wrong policies on both sides. In the first article, economist Xu Sitao focuses on attempts by China’s local governments to stimulate their economy – by issuing various consumer coupons. The scheme has caught on among China’s local governments, all intense competition for economic growth, jobs and national attention. The reaction of most Chinese consumers has been lukewarm, as they worry about higher taxes combined with a lack of job, health or old-age security. Meanwhile, some columnists, bloggers have a newfound interest in economic policy and blast the schemes. Xu notes, “The debate underscores a nascent yet powerful trend of Chinese consumers taking a proprietary approach towards public finance.” Participation by an engaged citizenry could be the best way to resolve imbalances and achieve lasting economic reform. – YaleGlobal

US and China: Grappling Over Economic Rescue – Part I 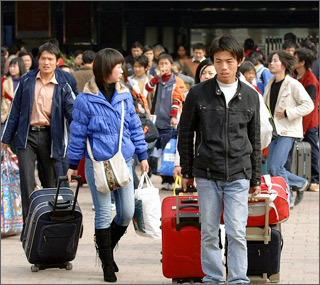 Sad way home: More than 10 million Chinese have returned to their villages after losing jobs in the export industry, while the government wonders how to make them spend

BEIJING: The six month-old global financial crisis has already claimed many victims in the financial world and this week felled the first government – of Iceland – for its failure to cope with the crisis. In China, the government’s efforts to respond to the domestic crisis visible in millions of job losses and foreign pressure to stimulate its domestic demand have triggered a new popular activism. Heated debate in the pages of newspapers and internet blogs over the best policies to help the affected and reform the economy marks a new phase. Regardless of which method succeeds in stimulating Chinese economy and meeting the world’s objection to China’s rising trade surplus, the people taking ownership of policy would be good for China and the world.

In the face of global complaints about the dangers of trade imbalances and the need for more domestic consumption, the Chinese government has unveiled a massive stimulus package. Thanks to heated debate in Caijing, a biweekly economic journal, and other papers and blogs, the idea of issuing consumption coupons has already been introduced in some of China’s major cities. 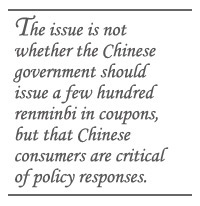 The debate underscores a nascent yet powerful trend of Chinese consumers taking a proprietary approach towards public finance. The issue is not whether the Chinese government should or would issue a few hundred renminbi in coupons, but rather that Chinese consumers are more critical of policy responses.

Analysts expect that China, unlike most other economies, to be better prepared for the synchronized worldwide recession, thanks to its huge savings and relatively closed financial system – meaning the country could maintain relatively stable economic growth while at the same time unlock private demand. Yet the Chinese, aware of their poor social safety net have decided to continue saving funds for the troubles that may lay ahead.

The government has also applied conventional tools such as large interest rate cuts and massive fiscal stimulus – $5880 billion for 2009 to 2010. Yet the fiscal stimulus now underway has drawbacks. Capital-intensive projects are unlikely to create many jobs, and government-sponsored investments may force state banks to take on non-performing loans. 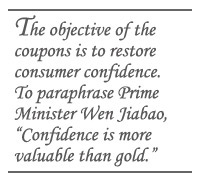 Similar coupon schemes were implemented in Japan, Korea and Taiwan. Caijing and others endorsed the idea of time-limited coupons for China. The economists surmised that ordinary mainland Chinese – much less well-off than their counterparts in Japan, Korea and Taiwan – have greater needs for basic necessities and would spend more on consumption. The theory suggested that consumption coupons could get a bigger bang for the buck in China.

The analysts also considered coupons better than a tax cut, encouraging spending rather than saving.

Even as Caijing launched the debate, the municipal government of Chengdu in Sichuan issued gave RMB100, or $15, to 380,000 low-income earners, a small step, but reflecting public consensus that greater subsides should go to the needy. Since then, some of the major city governments issued coupons with expiration dates. Hangzhou quickly replicated Chengdu’s move. Other cities offered innovative twists. For the Lunar New Year, Nanjin of Jiangsu gave RMB100m of tourism coupons to those who intend to travel for selected tourist sites during the first six months of the year.

Variations of consumption coupons could spread rapidly throughout the country, as local governments compete on GDP growth and foreign direct investment.

The objective of the coupons is to restore consumer confidence. To paraphrase Prime Minister Wen Jiabao, “Confidence is more valuable than gold.” Yet the various subsidies in China linked to purchases of cars and apartments introduced in recent months have yet to prove effective and have attracted unusual scorn, resistance compounded by fear of more job losses. A columnist for Shanghai Daily News, Wang Yong, called it “grotesque for a government official to urge the public, most plebeians, to buy a particular product in the name of patriotism."

Even those who argue for consumption coupons air some reservations. Ideally, coupons should go to low-income earners, more vulnerable to economic hardship with little to save. But, creating socially fair criterion for the dispersion of a few hundred renminbi worth of consumption coupons is a tedious exercise, and the potential of administrative costs, abuse or corruption cannot be overlooked. 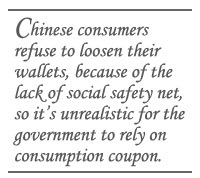 Coming months may prove that coupons are not the silver bullet for stimulating domestic demand in China. First of all, the severe global economic crisis has hit hard the Pearl River Delta, China’s powerhouse of exports. According to Caijing’s investigative report, more than 10 million migrant workers had to return to their villages early this year. The consumption coupons do not cover rural China. Beijing is correct to list job creation as a priority because Chinese peasants derive about 40 percent of their incomes from proceeds in factories.

Chinese consumers refuse to loosen their wallets, because of the lack of social safety net, so it’s unrealistic for the government to rely on consumption coupons to mitigate entrenched concerns about education and restraining, health care or income security for the aged.

There’s also a subtle reason for most consumers to be skeptical about the consumption coupons. The reason behind such consumption coupons is implicitly based on the hypothesis that consumers could also anticipate tax cuts or other relief. Yet the government has shown little signs of cutting taxes either for firms or individuals since the global credit crisis has emerged. Most consumers can’t help but view any consumption coupons as short-term benefits to be paid by their future tax burdens, and a natural response among the insecure is increased savings.

Accompanying the lukewarm response to consumption coupons is passionate debate over the purpose, eligibility and monitoring of the scheme. Chinese consumers are taking more ownership in shaping economic policies where they can.

An unintended consequence of consumption coupons was a shift in focus of the stimulus from headline GDP growth and fiscal revenues to consumer demand. The debate has touched upon the transparency of distribution and highlights consumer desires for greater understanding of government-mandated projects and more emphasis on social services rather than infrastructure: Indeed, investment in transport and power grid accounts for 45 percent of the well-touted stimulus package of $585 billion to be spent between 2009 and 2010; health care and housing account for just 8 percent of the package. 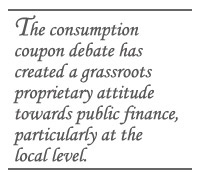 The reality is that China has adequate fiscal resources to mitigate the misery of the urban poor and millions of migrant workers who lost their jobs. Beijing's challenge remains in ensuring quality growth that can only be achieved by more efficient allocation of savings. China is open for grassroots reform – remember, rural reform in 1978 was triggered by the decision of 18 farming families in Anhui province, one of the poorest provinces then, to secretly “privatize” land. Eventual official endorsement of the “unlawful” behavior dismantled communes and triggered economic reform.

The consumption coupon debate has created a grassroots proprietary attitude towards public finance, particularly at the local level. The challenge for the government is how to come up with consumption-targeted boosting measures while keeping administrative costs and public concern about the purpose of economic growth in check. Bottom-up changes are often more lasting. In planning measures to boost demand, Beijing could learn more from the savvy of ordinary Chinese and their response to economic policies than the expert advice from well-intentioned foreigners.