US and China: Grappling Over Economic Rescue – Part II

With the rest of the world looking for leadership in emerging from economic crisis, how to stimulate the growth in China and the US has become the most urgent task. Other nations expect the pair to coordinate policy and do what they can to unfreeze credit, restore stable growth and ease unbalances. Currency rates are one of the ways to moderate swings in global growth and trade flows, explains trade analyst Edward Gresser in the second article of a two-part YaleGlobal series. A source for global imbalances is the fixed currency rate in China, pegged to the US dollar and not allowed to fluctuate like other currencies in line with trade flow, debt and savings rates. As is often the case, the markets take care of imbalances. Already, US consumers have abruptly deserted shopping malls, and as China factories close, Chinese workers must contemplate other careers and entrepreneurial activities. As the Obama administration has already admitted, the US and Chinese governments should put aside differences over currency and trade for now and cooperate in devising effective stimulus packages while restoring confidence in a global economy. – YaleGlobal

US and China: Grappling Over Economic Rescue – Part II 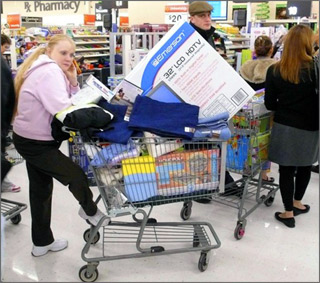 Chinese bargain: A US shopper hauls away a Chinese-made TV. Americans shopping a lot and saving little helped create the crisis

WASHINGTON: As the United States bails out banks and shoe-factories close their doors in China, should the two governments worry about exchange rates?

The question arose after Timothy Geithner, new US treasury secretary, suggested in a congressional hearing that China is “manipulating” the value of its currency. China then fired back, echoed by a chorus of financial-gallery alarm over potential trade conflicts. But a reading of Geithner’s full comment should dispel fear of a looming trade war over exchange rates: What the US seeks is a coordinated approach to save both economies from sinking.

Geithner’s argument was that Chinese currency rates are a topic that both governments need to address, but not the immediate issue. Noting the manipulation point, he continued: 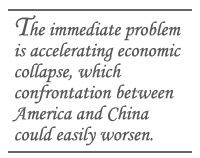 “We look forward to a productive economic dialogue with the Chinese government on a number of short- and long-tem issues. The Yuan is certainly an important piece of that discussion, but given the crisis the immediate focus needs to be on the broader issue of stabilizing domestic demand in China and the US.… Because China accounts for such a large fraction of the world economy, a further slowdown in China would lead to a substantial fall in world growth (and demand for US exports) and delay recovery from the crisis. Therefore, the immediate goal should be for us to convince China to adopt a more aggressive stimulus package as we do our part to try to pass a stimulus package here at home.”

This is the right context. The world needs more balanced growth in the next decade. Change in Chinese currency policy is part of this. But the immediate problem is accelerating economic collapse, which confrontation between America and China could easily worsen. Meanwhile, the immediate reason for currency diplomacy – the imbalances that can arise from currency misalignments – is at least for the moment fading as America’s imports and deficits shrink. So, though both countries need to address the causes of their illness, they can afford to wait until both patients feel better.

Why, an observer might ask, are currency rates relevant at all? 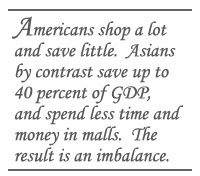 Fundamentally, currency rates are a way to moderate swings in global growth and trade flows. A high currency value makes exports expensive, imports cheap and can slow growth when inflation threatens. A low currency value helps countries escape from economic slumps through cheaper exports. The currencies of most big economies – the dollar, the euro, yen and pound – swing back and forth in this way, traded at rates of $3 trillion per day. China’s yuan is the exception, set in a band by government policy.

This is not inherently unworkable. But if the setting does not change with economic conditions, it can lead to big surpluses, deficits and risks. Here, we have one source of the crisis.

Leaving office, Geithner’s predecessor Henry Paulson pointed to international imbalances as one of the crisis’ causes. He meant that Americans were borrowing and spending too much, and Asia – China in particular – was saving too much and spending too little.

This is not a new phenomenon. Americans shop a lot and save little, relying on the worth of home ownership to build wealth. They save 5 or 6 percent of GDP in normal times; Asians by contrast save 20 to 40 percent of GDP, and spend less time in malls. The result is an imbalance, with Americans buying more of what everyone makes and Asians selling more than buying. 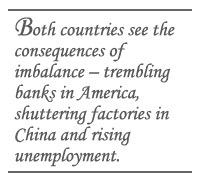 These habits have fairly deep roots: Americans have run deficits with Asia not only since the 1970s, but throughout the 19th century and the first half of the 20th century. But the imbalances of this decade grew larger and faster than those of earlier periods. US government policy, through steady tax cuts and low interest rates, drove American savings rates to just above 1 percent of GDP, the lowest figures recorded since 1934. Chinese hyper-savings and low consumption, meanwhile, helped create an anomalously high pool of capital and a steadily growing trade surplus. By 2006, America maintained a current-account deficit – the balance between spending and receiving trade revenue, investment income, charitable donations and foreign aid – equivalent to almost 6 percent of American GDP – an all-time record, and double the deficit of 2001. China’s surplus, meanwhile, rose from rough balance in 2003 to a 10 percent of GDP surplus in 2007, with a mirroring increase in American manufacturing-trade deficits. A fixed currency rate for the Chinese RMB, at 8.28 to the dollar from 1994 to 2005, meant currency did not respond to these changing conditions.

Geithner is therefore right to say that the yuan level is an important issue. Nor is he alone – in the high-growth period of 2004 to 2007, economists at the International Monetary Fund and universities politely protested both Chinese currency policy and America’s low savings and tax-cut mania. Nobody in a position to do something did much because solving imbalances is painful. Americans would have to save more, shop less and live modestly. Chinese would need to export less, sell more at home and shift employment from apparently reliable export factories to new sources of prosperity and create domestic demand. Chinese currency did appreciate after 2005, and America’s imbalance did begin to shrink, but only by a modest amount and China’s surplus continued to grow.

At some point, which nobody can quite predict, a rising imbalance becomes a risk. Both countries are seeing the consequences – trembling banks in America, shuttering factories in coastal China, and rising unemployment in both countries.

Over time, governments need to set their recovery on a more solid foundation than the one of 2003-2006. This will require a more flexible currency in China that can moderate any returning boom, as well as better regulation and more savings in America. 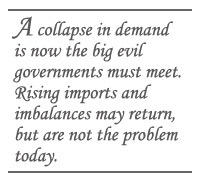 But as Geithner pointed out, timing is everything. For the moment, imbalances are not the world’s big problem. Markets reduce them by force, as demand collapses. With unemployment up, American families no longer go to the mall each Saturday for clothes and TVs. Imports are therefore plunging, from $229 billion in July to $183 billion by November; imports from China fell from about $33 billion to $28 billion. This is the fastest US import drop since the Second World War. As imports fall, America’s trade gap shrinks, from an annualized $720 billion in early 2008 to $530 billion by the winter. Across the Pacific, Chinese migrant workers from the coastal industrial zone head home as export orders dry up. China’s surplus may accordingly drop.

This collapse in demand is now the big evil governments must meet. Rising imports and imbalances may return, but are not the problem today. A confrontation over these matters would do little to solve the day’s big evils, but could make them worse.

Therefore, as Geithner pointed out, currency should not be the immediate concern. Instead the US and Chinese governments need to cooperate, coordinating stimulus policies to give maximum support to demand.

As they restore growth, though, they must find ways to make it balanced growth. Yes, as ordinary people worry about jobs and growth, governments should think about the foreign -exchange markets. But they should act at the right time. Geithner’s comment about currency, taken in its full context, implies that the Obama team is thinking along these lines. If so, they suggest the intention to restore health first, then place the prosperity of the 2010s on a stronger foundation than this decade’s expansion – not a bad goal at all.

Edward Gresser is director of the Trade & Global Markets Project with the Progressive Policy Institute.