US and China Must Tame Imbalances Together

With surging liquidity and massive trade imbalances, no one should have been surprised by the global economic crisis, because as finance professor of Peking University Michael Pettis explains, this has been the historical pattern. Pettis details the history of the crisis, starting in 1980s, when US policy encouraged securitization of mortgages, converting illiquid assets into highly liquid investments; US households shifted money into homes rather than savings accounts, and housing prices climbed; China, enjoying a trade surplus, collected US dollars and invested in US assets. A self-reinforcing cycle led US consumers to buy more, Chinese factories to produce more, banks in both countries to lend more, and the bubbles burst in late 2008. US adjustment is more rapid than China’s, which could lead to a new set of problems. Pettis warns that replacing US household consumption with US government consumption will only perpetuate the imbalances, and he urges the two nations to act responsibly, coordinating fiscal and monetary policies to ease US overconsumption and Chinese overproduction. – YaleGlobal

US and China Must Tame Imbalances Together

The two nations must coordinate fiscal and monetary policy to control the crisis they helped create
Michael Pettis
Tuesday, January 6, 2009 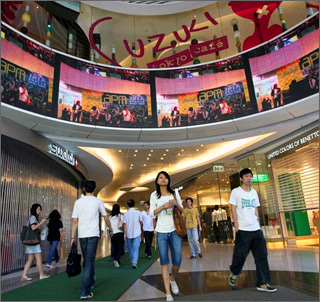 Shuttered mall: China needs to find a domestic solution to its overcapacity in producing consumer items

BEIJING: The surprising thing about the current financial crisis roiling the world is that there is surprise. While triggers for financial crises throughout history have been different, the underlying causes have been the same. Every financial crisis in history has been preceded by a long period of excess liquidity growth. It’s no different this time, nor is the sharp debate now raging about finding the scapegoat. Without trying to apportion blame, it’s clear though that the surge in US liquidity and the US-China trade imbalance that created this surge in liquidity have been major factors behind the current crisis, and policymakers in Washington and Beijing share the primary responsibility to readjust their economies.

Excess liquidity growth typically occurs for two reasons: First, financial innovation or new money sources can lead to sharp increases in underlying money – for example the development and expansion of joint stock banks in the 1820s, the securitization of mortgages in the 1980s, or large gold or silver discoveries in the 19th century. Second, massive global imbalances are recycled – like German reparations in the 1920s or petrodollars in the 1970s. 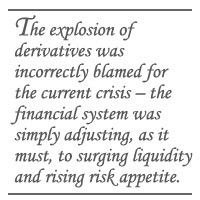 During the period of excess liquidity growth several factors set the stage for the subsequent crisis – asset prices rise as money flows into asset markets, risk appetite rises as risk premia decline and risky investments prove profitable, and the perceived value of liquidity declines as trading volume surges. When this happens, regulatory attempts to reduce risk in the financial system generally fail. When any part of the financial system is constrained from taking on risk, the market simply evades these constraints in one of three ways: It innovates around them, it generates or develops new and unregulated parts of the financial system, or it conceals regulatory violations.

The recent explosion of derivatives – incorrectly blamed for the current crisis – was simply an efficient way to accomplish all three, and was no more the real “cause” of the current crisis than investment trusts were in the 1920s or out-of-control real estate lending was in 1980s Japan. The financial system was simply adjusting, as it must and always does, to surging liquidity and rising risk appetite. 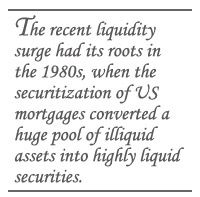 The recent liquidity surge, to which the current crisis is the inevitable denouement, had its roots in the 1980s, when the securitization of US mortgages converted a huge pool of illiquid assets into highly liquid securities, and was subsequently reinforced by the recycling of the Japanese trade surplus with the US in mid-decade. The process took off, however, after 1998. During this time US household savings declined to rates never before seen and the US trade deficit, which until then had rarely exceeded 1 percent of GDP, rose to levels never matched in US history.

Also during this period several Asian countries, led by China, began running policies aimed at generating trade surpluses and accumulating foreign currency reserves, to the extent that net capital flows from developing countries soared to the highest recorded levels in history. It’s notoriously difficult to sort out causality in balance-of-payments relationships, but the fact that this process seems to have begun in 1998 suggests that it may have been a reaction to the Asian crisis of 1997, a shocking event for Asian policymakers to this day.

The fundamental relationship in this global balance of payments was between China and the US. With Chinese policies aimed, explicitly or not, at promoting production and constraining consumption, China produced far more than it consumed.

As part of its trade surplus, China accumulated dollars, subsequently invested in the US. This capital export did not occur in the form of private investment, but rather as forced accumulation of foreign currency reserves, which were recycled back to the US largely in the form of purchases of US dollar assets by the People’s Bank of China (PBoC). Since China sets the value of its currency, the PBoC had no choice but to accumulate reserves in this manner. 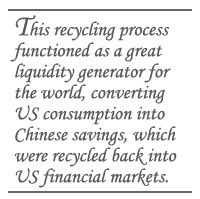 This recycling process functioned as a great liquidity generator for the world, converting US consumption into Chinese savings, which were recycled back into US financial markets through massive PBoC purchases of US securities. There are several self-reinforcing aspects to this system that pushed it to the extremes it ultimately took. In the US the torrent of inward-bound liquidity boosted asset prices. As real estate and stocks surged, substantially raising US household wealth, households diverted a rising share of their income to consumption.

At the same time since rising liquidity always forces financial institutions to adjust their balance sheets to accommodate money growth, they increased outstanding loans. With banks eager to lend, and households eager to fund consumption, it was only a question of time before household borrowing ballooned and an increasing share of current income was diverted to consumption rather than savings. In fact since the late 1940s US households have saved between 6 and 10 percent of US GDP, but after 1998 household savings began plummeting, to reach nearly zero by 2007 – something which had never before happened.

Meanwhile in China, as foreign currency poured into the country via its trade surplus, the PBoC had to create yuan to purchase the inflow. In China most new money creation ends up in banks, who primarily fund investment, as consumer lending is a negligible part of bank lending. The PBoC tried to constrain excess credit growth, but it surged anyway, mostly off balance sheet, in rapid loan growth among policy banks, exempt from the loan constraints, or in the unregulated informal banking sector. As always, loose monetary policy resulted in explosive growth in financial risk-taking, even as regulators tried to constrain the growth.

With Chinese investment surging, industrial production grew faster than consumption and, concomitantly, real estate prices soared. As the gap between production and consumption grew, so did China’s trade surplus, which resulted in more foreign currency pouring into the country, thus reinforcing the cycle.

This trade and capital relationship between the two countries, with each country locking itself unwillingly and accidentally into self-reinforcing monetary traps, caused the imbalances to get so out of hand. It also ensured that adjustment would be brutal. With US asset markets now plunging and US banks unwilling to lend for consumption, one-half of the relationship is adjusting sharply. China’s equally sharp and necessary adjustment should not have been a surprise. 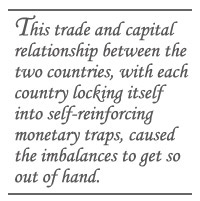 We are now in the second stage of the crisis, in which trade-surplus countries must adjust after the forced adjustment in trade deficit countries. However, the US is so much larger than China, and it is adjusting so rapidly, there’s a real risk that the Chinese economy will be overwhelmed. Policymakers, especially in the US and China, must ensure that this adjustment takes place in the least disruptive way possible. This requires that as the major trade deficit and trade surplus countries, the US and China must coordinate fiscal and monetary policy so as to slow the process down.

US fiscal policies, in other words, should not be aimed at replacing collapsing US household demand with government demand. This would only perpetuate the imbalance. They should be aimed primarily at providing traction for Chinese fiscal policy, which ultimately must be responsible for creating enough demand to absorb Chinese overcapacity. Unfortunately it’s far from obvious that policymakers, especially in China, understand the risk.

Michael Pettis is a finance professor at the Guanghua School of Peking University and author of “The Volatility Machine: Emerging Economies and the Threat of Financial Collapse.”