Is a US Brain Drain on the Horizon?

While a second Great Depression may have been averted, the unintended consequences of the Great Recession are just beginning to be felt. One such effect is reverse migration. As noted immigration researcher Vivek Wadhwa reveals, many foreign-born workers in high-tech industries are returning home or contemplating such a return. The reasons for this are many, including better economic prospects or job opportunities. That the US, once the land of golden opportunity, and other developed nations have seen only anemic economic growth compared with developing nations like China or India is not lost on young entrepreneurs or individuals in the early stage of their career. Of course, there are other factors motivating such migration: the pull of home and the threat of restrictive new laws in the US. On the other hand, returning home is fraught with its own hurdles: returnees note difficulties re-assimilating due to bureaucracy, corruption, and pollution. Whatever the case, the US should be worried if, as a result of the global financial meltdown, it will face a brain drain of its own. As Wadhwa notes, 25 percent of patent applications in the US had foreign nationals as inventors or co-inventors. To continue to encourage innovation – the backbone of prosperity – the US will need encourage more innovators. – YaleGlobal

Is a US Brain Drain on the Horizon?

BERKELEY, CALIFORNIA: At a recent meeting of young technologists in Silicon Valley, I polled a room full of Indian techies about their future plans. It was an ad hoc exercise but when I asked how many of them planned to return home to India to work in the near future, I was amazed that over 50 percent of the people raised their hands. That dynamic is also playing out on a world stage as the great nations of the world battle for the brains that will spur their economies. During his recent trip to the US Indian Prime Minister Manmohan Singh said he welcomed Indians to return home. India also unveiled a policy that would allow Indians to hold multiple citizenships to allow them to access the incentive benefits of Indian nationals without giving up their US citizenship. China, too, has mounted campaigns and offered incentives to bring back business people, technologists and entrepreneurs who were living overseas. Ironically, this trend has been growing at a time when the crisis-hit United States is facing pressure to discourage immigration by foreigners with skills. 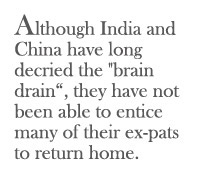 Although India and China have long decried the "brain drain“, they have not been able to entice many of their ex-pats to return home. That appears to be changing, and fast. The reason is the strong economic growth rates in those countries coupled with enhanced entrepreneurial opportunities and rapidly rising standards of living and wages. Conversely, the US and most of the West continue to suffer from slower economic growth rates and living standards and wages that are, by some measures, declining in real terms. The number of H-1B visas (the primary vehicle for entry and employment for immigrant technologists and scientists) has actually dropped during the Great Recession.

The net result of this turnabout could be a drop in US innovation as more talent decides to return to their birthplace or that of their parents. Such a shift is good for China and India but bad for the US. That foreigners residing in the US contribute enormously to innovation is beyond dispute. My research teams at Duke University calculated that foreign nationals residing in the United States were named as inventors or co-inventors in one quarter of WIPO patent applications filed from the United States in 2006. Additionally, 16.8 percent of international patent applications had an inventor or co-inventor of Chinese heritage and 13.7 percent had an inventor or co-inventor of Indian heritage. By way of comparison, ethnic Chinese and Indians collectively represent less than 3 percent of the total US population. 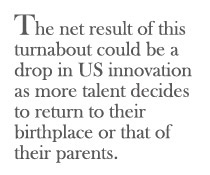 In 2006, immigrants contributed to 72 percent of the total patent filings at Qualcomm, 65 percent at Merck, and 60 percent at Cisco Systems. And contrary to claims that immigrant patent-filers crowd out US-born researchers, emerging research is increasingly showing that immigrants actually tend to boost patent output by their US born colleagues. These immigrant patent-filers emerged from the US university system, where foreigners now dominate the advance degree seeking ranks in science, technology, engineering and mathematical disciplines. For example, during the 2004–2005 academic year, roughly 60 percent of engineering Ph.D. students and 40 percent of Master’s students were foreign nationals. (We don't know for certain that those who have been leaving are patent-filers but anecdotal evidence suggests this to be the case).

Beyond intellectual contributions, Chinese and Indian immigrants have been key entrepreneurial drivers in the US. According to another survey we conducted, one-quarter of all technology companies in the US have at least one founder who is a Chinese or Indian immigrant. The concentration is even heavier in certain key industries such as semiconductors and enterprise software. Based on this data, we calculated that in 2005, immigrant-founded tech companies generated $52 billion in revenue nationwide and employed 450,000 workers. This revenue total bridges multiple multi-billion dollar sectors including semiconductors, Internet, software and networking. 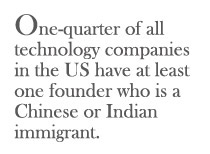 Precisely how many present-day entrepreneurs and knowledge workers have already departed remains difficult to quantify. No government tallies return immigrants or departing immigrants, let alone the types of work skills they have to offer. But stories of these departures are common in the popular press and circulating in immigrant-oriented electronic communities. We feel fairly certain that the numbers are most likely in the tens of thousands. As part of research on immigration funded by the Kauffman Foundation, we located more than 1,200 such foreign-born Chinese and Indian returnees with knowledge worker backgrounds on the social networking site LinkedIn alone. When we surveyed them as to reasons for their departure, they emphasized that they left to seek better economic opportunities and better chances for career advancement.

Future departures seem set to increase, as well. In a similar study of over 1,200 foreign national students matriculating in the US, we found that only 6 percent of Indian, 10 percent of Chinese, and 15 percent of European students said they want to stay permanently. Not surprisingly, many cited worries over obtaining visas, a logical concern, as restrictive immigration policies have left roughly 1 million immigrants and their dependents in a limbo that could go on for over a decade with no promises that they will ever obtain citizenship. 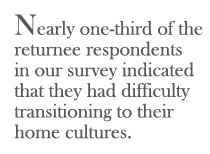 What's more, those that have departed did so at a particularly critical time in their careers – just before they would be likely to start their own companies. On average, these company founders had lived in the US for 14 years. The average returnee in our survey was in their mid-30s. The implication is clear. Those who had left will start companies in their home countries, where most of the benefits of this entrepreneurship will accrue. The students who plan to depart will have a similar impact as they would likely be the same researchers who would be filing patents in the future for Qualcomm and Cisco.

A number of mitigating factors could, however, easily slow this tide. Political unrest in China or increased terrorism in India are two of the bigger potential hurdles. Likewise, as these economies mature and their currencies gain in value against the dollar starting a new business in the home country with US dollars will become more expensive. The US Federal Government for the first time in decades appears intent on spending big money on big science and R&D, a wild card that could influence scientists and technologists to stay. And it’s very important to note that nearly one-third of the returnee respondents in our survey indicated that they had difficulty transitioning to their home cultures. Bureaucracy, corruption, pollution, congestion and a different work culture were all reasons they listed.

So clearly all is not lost and if the US relaxed immigration policies by, say, allowing founders of companies to remain in the US indefinitely, this could prove a strong magnet to retain talent. But for the near term, with US unemployment over 10 percent, venture capital and corporate spending depressed, and US universities rapidly cutting back their budgets, the Rising East will continue to pull in its fair share of future science and technology rock stars who may build the next Google or Microsoft in Gujarat or Mumbai.

What is clear is that a big shift is underway. China and India will no longer be farm teams for the scientific Big Leagues in America.

Vivek Wadhwa is an Exec in Residence at the Pratt School of Engineering, Duke University, and Senior Research Associate at the Harvard Law School.