The privatization of war by transnational terrorists is the gravest threat of the twenty-first century, argues Joseph S. Nye, Jr., Dean of Harvard's Kennedy School of Government. Nye believes that insofar as the source of threat is changing from large conventional states to rogue states and terrorist networks, the US should rely more on its soft power than its military might. "Soft power," Nye explains, "lies in the ability to attract and persuade rather than coerce." If the leadership of the US truly believes the country's global role is to lead in promoting democracy and liberty, Washington must recognize that coercive force can only impede the spread of American values. A multilateral approach, Nye argues, would better achieve Washington's goals and allow America to share its burdens in waging the war on terror and dealing with Iraq, North Korea, and Iran. Only through consultation and cooperation, Nye suggests, will the US be able to realize its global ideals and effectively confront threats to world security. -YaleGlobal 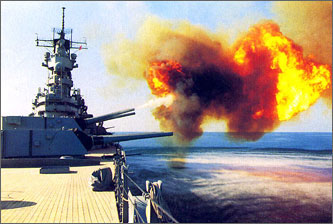 US Navy in action in the Persian Gulf: Hard power is crucial, but soft power is the key to long-term success.

CAMBRIDGE, USA. Just over a year ago the Bush administration published its National Security Strategy, which articulated a dramatic change in its foreign policy outlook after the events of September 11, 2001. The new strategy declared that "we are menaced less by fleets and armies than by catastrophic technologies falling into the hands of the embittered few." Instead of strategic rivalry, "today, the world's great powers find ourselves on the same side - united by common dangers of terrorist violence and chaos."

The rhetoric of the new strategy attracted criticism at home and abroad, but critics notwithstanding, the distinguished Yale historian John Lewis Gaddis has compared the new strategy to the seminal days that redefined American foreign policy in the 1940s. The new strategy responded to the deep trends in world politics that were illuminated by the events of September 11, 2001. Globalization, for instance, has proved itself to be more than just an economic phenomenon; it has been wearing away at the natural buffers that two oceans and distance have always provided to the United States. The implications of state failure are also clear: dreadful conditions in poor, weak countries halfway around the world can have terrible consequences for the United States. 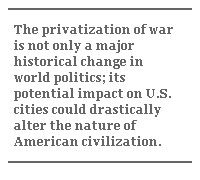 The gravest threat, however, is posed by the privatization of war. One surprise attack by a transnational terrorist group killed more Americans than the state of Japan did in 1941. The democratization of technology over the past decades has made terrorists more lethal and more agile, a trend that is likely to continue. Traditional state-centric analysts think that punishing states that sponsor terrorism can solve the problem. Such punitive measures might help, but in the end they cannot stop individuals who have already gained access to destructive technology. After all, Timothy McVeigh in the United States and Aum Shinrikyo in Japan were not sponsored by states. The privatization of war is not only a major historical change in world politics; its potential impact on U.S. cities could drastically alter the nature of American civilization.

This is what the new Bush strategy gets right. What the United States has not yet sorted out is how to go about implementing its new approach. Washington has done far better on identifying the ends than on the means.

According to the strategy, the greatest threats that the American people face are transnational terrorism and weapons of mass destruction, and particularly their combination. Yet because of its transnational nature, meeting that challenge requires the cooperation of other countries. The willingness of other countries to cooperate in dealing with transnational issues such as terrorism depends in part on their own self-interest, but also on the attractiveness of American positions.

Soft power lies in the ability to attract and persuade rather than coerce. It means that others want what the United States wants, and there is less need to use carrots and sticks. Hard power grows out of a country's military and economic might. Soft power arises from the attractiveness of a country's culture, political ideals, and policies. When U.S. policies appear legitimate in the eyes of others, American soft power is enhanced. Hard power will always remain crucial in a world of nation-states guarding their independence, but soft power will become increasingly important in dealing with the transnational issues that require multilateral cooperation for their solution.

The need for international cooperation in Iraq has moved to the foreground, but the manner in which the Bush Administration handled the diplomacy leading up to the war has made others reluctant to help. The war-s negative effect on American soft power has forced the United States to incur the lion-s share of the costs for the rebuilding effort. The contrast with the example of the first Gulf War is instructive. In that conflict our allies picked up the majority of the tab, thanks in large part to the fact that the first President Bush painstakingly assembled a broad coalition of allies long before the first shot was fired. Soft power helped the United States shape the international agenda without arousing widespread suspicion or resentment.

In many respects the Iraq War represented the unfinished business of the 20th century. The Security Council resolutions mandating the destruction of Iraq-s nuclear, biological, and chemical weapons programs date back a decade. North Korea and Iran, on the other hand, pose the first real tests of the national security strategy.

North Korea-s flagrant record on weapons proliferation is beyond dispute, and its negotiators have declared that Pyongyang already has nuclear weapons. What is left to negotiate? Plenty. President Bush-s recent suggestion of a multilateral security guarantee demonstrates that he understands the dangers of going it alone on North Korea. He has little choice but to continue negotiations with the full realization that they will be difficult and have no guarantee of succeeding. In addition to the threat posed by its hard power, the United States will need its soft power to maximize the cooperation of the other parties at the table. If negotiations fail, multilateral cooperation among the regional players will become more, not less, important. But the clock is running quickly in this case. The North Koreans already claim to have a bomb, and plutonium reprocessing at the Yongbyon nuclear facility has begun. There is no margin for error here. Talks are scheduled to reconvene next month, but the prospects for a resolution remain dim. Much will depend on whether China, Pyongyang's principle supplier, decides to exercise its potential leverage.

Iran offers yet another test with a different timeframe. In October, Iran agreed to allow the IAEA to conduct wide ranging special inspections and to temporarily suspend operation of the centrifuge enrichment facilities that it had secretly constructed. But that will not be enough to solve the problem. Iran claims that as a party to the Non-Proliferation Treaty, it has the right to enrich uranium for peaceful purposes. In asense, the NPT was born with a loophole. Even if a country allows inspections, it can legally accumulate enriched uranium (or reprocessed plutonium) under the guise of a peaceful energy program, and then suddenly declare that circumstances have changed and withdraw from the treaty. It could then produce nuclear weapons at short notice. If Iran were to do this, it would add to the dangers in an unstable region and would be likely to begin unraveling the non-proliferation regime world wide. 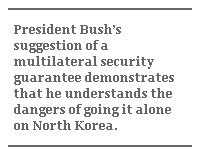 President Bush should approach Europe, Russia and others and persuade them to offer Iran a deal that would plug the loophole. Russia, which is helping Iran construct a nuclear energy reactor at Bushehr, could offer Tehran a guarantee of low enriched uranium fuel and reprocessing of the reactor's spent fuel in Russia. The deal could be given teeth by a United Nations Security Council resolution that the United States would endorse. The resolution could include a stick declaring that further proliferation of nuclear weapons would be a threat to peace under the Charter, and that any country moving in such a direction would be subject to sanctions. The resolution could also include a carrot guaranteeing Iran access to the non-dangerous aspects of nuclear energy technology. The pot could be further sweetened by offers to relax existing sanctions and a security guarantee if Iran remains non-nuclear.

Because of Iran's suspicion of the US, subtle American diplomacy could persuade Europe and Russia to launch the proposal, and Washington could then announce its support. Given the paucity of issues on which the US, Russia, Europe and the UN are in close agreement, such a proposal offers a rare opportunity for a multilateral solution to a vital concern.

© 2003, Yale Center for the Study of Globalization