US-China Duopoly Is a Pipedream

New terms like ‘Chimerica’ and G2 coined in recent years, describing ties between China and the US have acquired new currency as the world sought a way out of the global financial crisis. With China taking the spotlight during the G20 meeting in London and senior Chinese and American officials recently meeting for a Strategic and Economic Dialogue in Washington, there is hope that working together the two would help end the crisis. But, some fear that the term G2 may reflect the new reality of a condominium. China analyst Christopher M. Clarke argues that there is less than meets the eye. He writes that an economically “symbiotic relationship” that led some to coin the term ‘Chimerica’ may in fact be a desperate embrace for fear of “going over the cliff with the other.” The political divide between the two showed in divergent security interests and ambitions, naval incidents, and the US refusal to let China buy dual use high-technology items are additional evidence that a US-China condominium is not in the cards. US Secretary of State Hillary Clinton stated the truth when she underlined the need to move “from a multi-polar world to a multi-partner world.” – YaleGlobal

US-China Duopoly Is a Pipedream

WASHINGTON: The recent high-level “Strategic and Economic Dialogue” between the United States and China has breathed fresh life into the notion of an emerging duopoly – the so-called G-2. For many the symbolism of Secretary of State Hillary Clinton in Beijing urging the Chinese to keep buying US treasury bills was visible evidence of the interdependence of the two powers. Before the latest event, two scholars even coined a catchword – ‘Chimerica’ – to describe the new power structure. The reality, however, is less colorful: Given the wide differences between the two, economic co-dependence alone would not a Sino-American condominium make.

The idea of such a condominium gained considerable attention, and not a few converts, when economic historian Niall Ferguson first used the term in 2006. 1 At the time, he said, China and America had “effectively become fused to become a single economy,” the interactions of which were driving a “global financial boom, with its correlated upward movement of virtually every asset class.” Within a few short years, however, even Ferguson conceded that his “Chimerica” construct was overtaken by events and the marriage was on the rocks. The worldwide economic crisis has exposed some – but not all – of the conceptual and factual weaknesses of Ferguson’s clever idea. 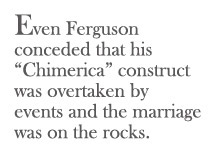 In fact, even when Ferguson first broached the idea, many other scholars and pundits strongly demurred, pointing out that the idea of “Chimerica” was built on the faulty premises that the Sino-American economic relationship was sustainable and that coincidence of economic interests, even if they were real, would eventually be outweighed by political differences and emerging power rivalry. Some even likened the probable future of the relationship to the rise of Kaiser Wilhelm’s Germany – a well-entrenched world system unable to cope with the demands of a rapidly modernizing and militarizing emerging power.

Today, the US and China are not locked in a zero-sum competition for economic growth. Globalization to be sure has its highly competitive aspect, especially in the search for strategic resources such as oil and minerals. But all major countries recognize that the long-term solution to growing resource scarcities is intimately tied to the fate of the global environment, and that sustainable solutions require cooperation as much as competition. In economic growth, a rising tide lifts all boats; in environmental degradation, global deterioration threatens to sink them all together. 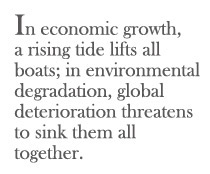 If there is no inherent reason why the “world system” cannot accommodate the “rise” of China, there are other good reasons why a “Chimerica” or “G-2” is unlikely to emerge as the answer to the problems of the near-term future. Most important is the residual deep-seated strategic mistrust between the two powers. A strong strain of thought – running through US editorial pages, Congress, some quarters of the academy, and the general public – deeply mistrusts China’s long-term ambitions. Some worry that China’s military modernization is aimed at undermining US relationships in Asia, and eventually at pushing the US out or at least displacing its influence with that of Beijing. Some see China’s development of a more capable Navy as presenting a long-term challenge to US supremacy in the Pacific and the first step toward controlling the sea lines of commerce that constitute the life link of energy-dependent Japan and South Korea. This mutual mistrust surfaced at the Washington meeting with Chinese complaints about being barred from buying dual use high-technology items from the US.

The Chinese are no less concerned about US intentions. Many academics, think-tank specialists, and government officials remain convinced that the long-term US goal is to “divide and Westernize” the People’s Republic. Such attitudes are revealed when Chinese officials blame US support for the Dalai Lama, Rebiya Kadeer, pro-democracy activists, and human rights lawyers for the domestic unrest created by their own misguided and repressive internal policies. Beijing also sees US efforts to shore up its relations with China’s neighbors as part of a long-standing plot to surround China with unfriendly countries, US military bases, and other mechanisms for exerting “pressure” on the PRC.

The incompatibility of values and political systems lies close to the heart of this strategic mistrust. Despite the many reforms introduced over the past 30 years, the PRC remains a one-party state run by a self-selected leadership that will brook no challenge to its authority. The gradual tightening of controls over free expression during the past several years makes it clear that China is not evolving as many had hoped; greater introduction of market mechanisms, exposure to the outside world, and the emergence of a middle class are not leading visibly to a more liberal political system. If anything, the trend has been the opposite. The stronger China has appeared to become, the more its leaders have repressed challenges, and felt comfortable rebuffing criticism from the outside. Although Obama referred to differences in their mutual approach to human right in his opening remarks, the virtual absence of serious discussion of the issue at the S&ED in Washington symbolizes the Administration’s perceived need to soft-pedal political and social differences in order to re-right the world’s economy. No bilateral condominium is likely to emerge involving two countries with such radically different values and approaches to “interference in the internal affairs” of the other.

Even the idea of an economically “symbiotic relationship” has turned out to be a chimera. The credit-fuelled consumer consumption and deficit spending by the US were propped up by massive Chinese purchases of US government or government-backed debt. China is now paralyzed by its holdings of more than $800 billion in US Treasury bills: it cannot unwind its investment substantially or rapidly without precipitating a catastrophic decline in the value of its holdings and is reduced virtually to begging the US government to “adopt policies that will protect the value of its investments,” as the regime’s official press service reported after the Washington meeting. At the same time, with America’s budget deficit ballooning under the pressure of two on-going wars and the Administration’s ambitious agenda for health care reform, economic stimulus, and other programs promised during the campaign, Washington is reduced to pleading with Beijing to continue to buy Treasuries while promising not to take measures that would destabilize China’s fragile and questionable economic recovery. 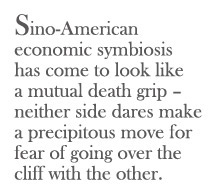 In short, Sino-American economic symbiosis has come to look more like a mutual death grip in which neither side dares make a precipitous move for fear of going over the cliff with the other. Leaders on both sides appear to recognize the very tenuous and touchy situation underlying the relationship and are eschewing grandiose claims or plans for condominium. In today’s increasingly integrated world the Sino-American economic co-dependence is one, albeit the strongest, of the connections that link the two countries. Their divergent political interests and ambitions and their many other respective connections and responsibilities rule out Washington and Beijing running a condominium. Admission of such a reality came from none other than Secretary of State Hillary Clinton who noted that in the decades ahead, “great countries will be defined less by their power to dominate or divide than by their capacity to solve problems…the fresh thinking of the 21st century moves us from a multi-polar world to a multi-partner world.”

Christopher M. Clarke, a China analyst at the State Department’s Bureau of Intelligence and Research, recently retired after 25 years of service.