A halfhearted embrace of globalization prevents the US from reaping full benefits of the students who attend its universities, allowing them to slip away to other countries. American universities attract some of the best students, enriching the talent pool and filling coffers, but a narrow-minded immigration policy squanders the benefits. Some analysts go as far as to suggest that science and math programs in those universities would struggle without international students. About 25 percent of the students attending Massachusetts Institute of Technology come from other countries. US immigration policies have strict limits for work visas and fail to accommodate the increasing numbers of foreign students who attend US schools and would like to work for US firms after graduation. Multinational firms hire the students for US jobs anyway and then relocate those who do not secure visas to nations with more open policies, including Canada and the United Kingdom. But small start-up firms do not have the luxury of overseas offices. The US welcomes individuals as students but not as workers, a policy that overlooks talent and creates a legacy of bitterness. – YaleGlobal 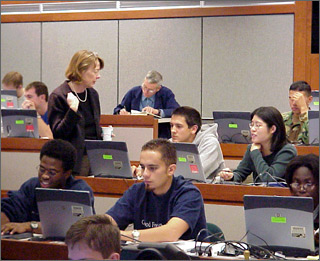 Missed opportunity: US policy opens education doors for international students, like those at MIT, but then locks them out of the workplace

NEW HAVEN: A farmer who grows a prized crop of vegetables would be annoyed by neighbors stopping by his field to pick off the finest specimens.

Yet that's what happens every year for the US and other nations that lack specific immigration policies, designed to attract the most talented or needed workers. US universities, renowned for producing top researchers, scientists and economists, welcome talented students from around the globe. However, thanks to an inefficient and antiquated visa policy, foreign students contribute fewer long-term benefits for the US economy. Missing out on tapping a major gain from globalization, the US loses many talented individuals who leave the US enlightened but embittered by their experience. 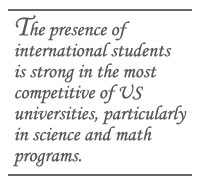 Strict limits on US professional visas chase away talent. The H-1B visa allows US firms to hire foreign workers for specialty occupations on a temporary basis. But an increasing pool of international students in the US combined with growing demand for skilled-labor visas in many sectors make that visa hard to come by.

Meanwhile, other nations have fine-tuned their immigration policies, devising point systems to attract the most talented workers. As a result, some US offices of highly competitive multinational firms could eventually shrink in size and relevance.

The numbers are not insignificant. More than 560,000 students came from around the world to study at US colleges in 2006, reports the Institute of International Education. The international presence is particularly strong at the nation's elite schools and in science and math programs: International students as a percentage of total enrollment ranges from 25 and 20 percent at Massachusetts Institute of Technology and Stanford, respectively, to 12 percent at Dartmouth and Brown.

With the US setting an annual cap at 65,000 H-1B visas, only a fraction of the students get to stay for work.

Of 15 employers that hired the most MIT graduates in 2006, 12 are firms that also lead in hiring H-1B employees, including Microsoft, IBM, Google, Intel and J.P.Morgan. 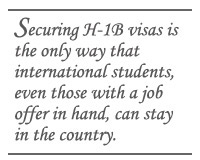 One of those employers, Microsoft, is opening an office not far from its headquarters in Redmond, Washington, but across the border, in Vancouver, Canada. Canada's immigration policies were a big factor in locating the new office, giving the company a convenient place for locating who pool of talent who can't secure the H-1B visas, according to a Microsoft Canada human-resource official, as reported in Canadian newswires. That country's well-defined point system, updated in 2002 to attract specific degrees, encourages young professionals, even those without job offers, to come to Canada.

The H-1B visa, in place since the 1990s, is one of several foreign-labor certification programs that allow employers to sponsor and hire workers on a temporary basis, when there are insufficient numbers of US workers "able, willing, qualified and available to perform the job," according to the US Department of Labor. Employers must agree to pay "prevailing wages."

US workers in the IT sector have long complained that the program is a way for employers to reduce wages. Yet US workers in math and computer science are virtually at full employment, with an unemployment rate of 2.4 percent in 2006, and wages continue to climb, reports the National Foundation for American Policy.

But now international students also complain about the program. After studying for four or more years in the US, many students hope to land jobs with top US firms. Instead, the H-1B process attracts a growing number of applicants, and students in the US must compete with applicants from all over the globe. Securing H-1B visas is the only way that international students, even those with a job offer in hand, can stay in the country.

Other countries - including Canada, Singapore, Australia and the UK - are eager to accept skilled temporary workers, especially the students who already have studied in domestic institutions.

Across the Atlantic, the UK is equally eager to import human capital. Its Highly Skilled Migrant Program encourages educated professionals to come to the UK for jobs without first getting a job offer. Using a point system, the UK strives to attract scientists and entrepreneurs; skilled workers including teachers, nurses and engineers and other workers in areas experiencing labor shortages. The country welcomes any "migrants who have most to contribute to the UK." 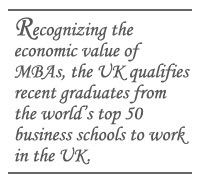 Recognizing the economic value of MBAs from prestigious institutions, the UK automatically qualifies recent graduates from top 50 business schools to work in the UK. Ironically, more than half of those business schools are in the US, where the same students are struggling to get H-1 Bs. As Bill Gates, founder of Microsoft Corp. put it, testifying before the US Senate in March, "it makes no sense to tell well-trained, highly skilled individuals - many of whom are educated at our top universities - that they are not welcome here."

US politicians are uneasy about elitism and designing any system that targets select groups, for example, graduates of the most competitive programs. Indeed, such systems would reject an applicant like Gates, who left Harvard without his degree.

So the US continues to rely on an open lottery system for choosing candidates. In 2006, a manager at a Niagara Falls hotel, a music director at a Korean Presbyterian Church and fashion models at a number of modeling agencies were among those in New York who secured the coveted visas.

When international students fail to secure the H-1B visas, some multinational firms based in the US hire them anyway, quickly relocating those employees to offices in nations with friendlier policies. But small private firms, startups supported by venture capital, don't have the luxury of overseas offices, notes Stuart Anderson, executive director of the National Foundation for American Policy, which conducts research on trade and immigration issues.

The US loses talent because of caps on the H-1B visa and waiting lists for citizenship green cards, says Rebecca Peters, director and counsel for legislative affairs of the American Council on International Personnel. Employers rethink business models in the quest for skilled labor - and that includes opening offices in the countries with open and efficient immigration policies. ACIP proposes increasing the cap and exempting students with master's or higher degrees from the H-1B cap.

Some students suggest that the H-1B quotas are no longer realistic. "The visa process does not take into account the quality of the candidates or their credentials, resulting in the granting of the H-1Bs becoming an arbitrary lottery rather than a merit-based selection process," said Saad Rizvi, a Yale University senior with a US job offer who plans to throw his name into the H-1B ring. "Excellent candidates are often rejected in favor of other less capable applicants."

US immigration policy can't ignore the increasing international enrollment in US universities, especially in the sciences and math. Otherwise there could be unintended consequences. For example, education programs could follow the students. The Council of Graduate Schools reports that 29 percent of US American graduate schools overall now participate in collaborative-degree arrangements with non-US universities and 25 percent plan to establish similar programs. Top science, math and research centers of US universities could eventually relocate and flourish offshore.

Corporations make no secret of what they want - the best talent the world can provide. And to get first pick, firms will open offices in the countries with the most competitive immigration policies.

Hassan Siddiq is a student at Yale University. Susan Froetschel is assistant editor of YaleGlobal Online.