Demographic trends, often ignored by policymakers, are clearly linked with the US’ immigration policy. If Congress and the Obama administration plan to implement an effective immigration policy, they need to understand how over time it will affect the country’s population figure. As demographer Joseph Chamie notes, policy makers should start by asking how large should the US’ population be. Answering this question will determine what should be the rate of immigration since immigration has a significant multiplier effect on population growth. The US is currently the most populous developed nation in the world and at current rates, it could overtake the European Union by the end of the century. Indeed, immigration policy affects not only domestic issues like social security and health care, which can have international implications as a result of government debt levels, but also affects the use of resources and carbon emission linked with global climate change. Imagine how high the US’ emissions could grow if its population were to double while retaining the current per capita carbon footprint? Until such questions are answered, immigration is unlikely to abate. – YaleGlobal

NEW YORK: As the new US Administration and Congress begin to tackle immigration reform they will again be faced with the weighty question of how large should America’s population be in the future. Should America’s population continue to grow indefinitely, perhaps doubling to 600 million by the end of the century? Clearly, any answer to this vital demographic question has serious and far-reaching economic, political, social and environmental consequences for America as well as for the international community of nations.

Some of America’s leading policymakers uncritically accept that an expanding population with increased immigration is good for America, ensuring its prosperity, power and harmonious relations with other nations with little if any adverse effects. Most others simply choose to ignore or equivocate on this fundamental demographic question, as has so often been done in past.

Leaders in the Senate and Administration will likely focus their attention on narrow aspects of immigration reform, as they did in the recent report of the Independent Task Force on US Immigration Policy, which – except for the paper it was printed on – ignored environmental implications of the policy. However, decisions and policies on US immigration, including future levels, priorities, high-skilled migration and illegal immigration, effectively load the demographic dice for America’s future.

Contrary to popular thought, the dominant force fueling America’s demographic growth is not natural increase, but immigration. This is because immigrants not only add their own numbers to the nation’s overall population, but also contribute a disproportionate number of births whose effects are compounded over time. A couple of examples help to illustrate this important point.

The second example illustrates immigration’s impact on America’s population from a future perspective. By mid-century the US population is projected to reach 439 million, assuming current annual net migration of about 1.3 million increasing gradually to 2 million (Figure 2). However, if further immigration were to cease, the US population in 2050 would likely be about 100 million less, i.e., roughly 345 million. Again, the major force behind the future growth of America’s population, at least 70 percent in this instance, is the addition of immigrants and their descendants.

Immigration is also altering America’s ethnic composition and culture, i.e., less European and more Latin American, Asian and African. Throughout the 19th century and most of the 20th, the US foreign born population was predominately from European countries, e.g., Germany, Ireland, Italy and the United Kingdom. Today the top five countries are no longer of European origin but are Mexico, China, Philippines, India and Vietnam, with Mexico accounting for a third of the foreign born. As a result, America will increasingly look, sound and act differently over the coming decades – which is neither good nor bad but different. By mid-century, for example, one out five Americans is expected to be an immigrant - higher than ever before - with Hispanics accounting for 30 percent of the nation’s population. 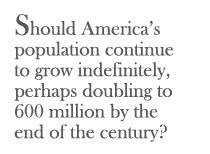 As a result of continuing high rates of immigration and fertility levels at replacement, America is the most populous developed country, representing nearly five percent of the world population. In addition, America’s demographic standing relative to the billion-plus club of China and India remains more or less unchanged for the foreseeable future. However, its demographic standing among developed nations as a whole is expected to increase from a quarter today to a third by 2050. Moreover, with respect to the European Union (27), America is projected to achieve parity with it in roughly 50 years and exceed EU’s population well before the close of the century.

So then, what is the role of international migration in America’s future? With current demographic trends likely to continue for some time, immigration can be expected to continue to play a major role in the future size, age-structure and ethnic composition of America.

However, it is important to keep in mind that while these population projections for America’s future appear likely, they are not necessarily inevitable. Demographic trends may change radically due to behavioral changes and unanticipated events impacting fertility and mortality as well as changes in America’s immigration practices and policies.

These projections raise the fundamental question of how much larger should America’s population be. Over the past several decades, the White House and Congress established various commissions to comprehensively address the future size of America’s population. In general, these high-level advisory bodies concluded that in the long run, no substantial benefits would result from the further growth of the nation’s population. And in particular, they recognized that America cannot grow indefinitely and recommended that the country welcome and plan for a gradual stabilization of its population. 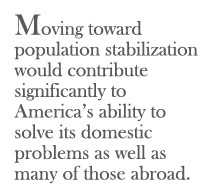 Also, they concluded that there is hardly any problem confronting America whose solution would be easier with a larger population. Moving toward population stabilization would contribute significantly to America’s ability to solve its domestic problems as well as many of those abroad, especially energy and resource consumption, climate change and environmental sustainability. Moreover, without US leadership as demonstrated by domestic efforts to stabilize its population and thereby mitigate further damage to the environment, other nations would be reluctant to adopt policies and practices to stabilize their populations and work toward developmental and ecological sustainability.

As the new US Administration and Congress begin to deal with immigration, they could decide to alter the direction of the country’s current pro-growth immigration policies and plan for a gradual stabilization of America’s population, as the various advisory commissions have indeed recommended. This outcome would be environmentally beneficial and advantageous to America’s long term interests.

Given the current economic and political climate, it seems doubtful that the US Congress will be able to address immigration reform any time soon. However, when they do begin debating US immigration policies, it would be wise to consider demographic realities, future population projections and likely environmental costs and not simply embrace the traditional pro-growth ethic that “more is better.” Congress and the Administration have an opportunity to address immigration reform in the broader context of America’s population. If they choose to do otherwise, expect another 100 million Americans to be joining us very soon.

American people can't stop our politican leaders, both @gop, @dnc selling out America.
We have demanded for at least 20 years to stop. They refuse. The U.S. corporations demand cheap, slave labor.
The rich tech companies, @google, @facebook, all of them, plus @verizonl, @att, @disney, @suntrust, etc. all demand cheap labor.
Best paying American jobs are going to foreign visa labor, majority #INDIA.
The illegals get the lower skilled labor.
Every part of the American work force is impacted by Cheap, Slave Labor.
@potus Trump promised WALL, stop VISA FOREIGN workers. Neither has happened.
American people are not represented by any political leader.

There is nothing more important for preserving America's quality of life that halting and gradually reversing population growth. That means we must slash immigration levels.