The US Losing Fight on Huawei: Wired

Despite US lobbying, UK officials will allow the Chinese firm Huawei to provide components to its 5G network. British officials suggest they can mitigate risks, but the United States expects Huawei to undermine security and privacy. “Over the past two years, the Trump administration has mounted a high-profile, high-stakes, high-pressure campaign to stop its key allies – including the so-called Five Eyes, the English-speaking intelligence alliance of Australia, New Zealand, Canada, the UK, and the US, as well as NATO alliance countries like Germany – from doing next-generation network business with Huawei,” explains Garrett Graff. Long-time US allies favor Huawei’s cost and technological advantages, yet hesitate aggravating either major economic power. The US may limit intelligence-sharing with countries that allow firms to do business with Huawei; China could apply economic pressure for any that impose bans. Britain will limit Huawei to a 35 percent market share, building base stations and antennae rather than the data-carrying networks. Meanwhile, the United States tries to ease tensions, worried about China blocking US equipment purchases, reducing revenues and research. Graff concludes, “In the end, the technological world may actually just be too complex, the global supply chains too interwoven, and the networks that drive modern life too interconnected to draw the bright lines that the Trump administration wants.” – YaleGlobal

The US Losing Fight on Huawei: Wired

Read the article from Wired about the UK deciding to let Huawei work on its 5G networks. 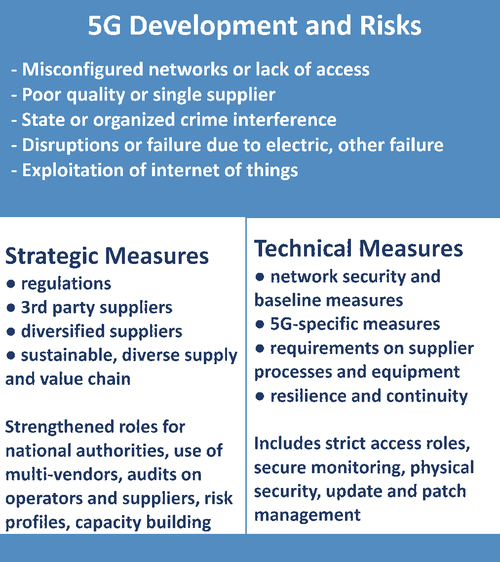 Make 5G Secure and Open to All

What Is 5G? Digital Trends