The Abu Ghraib prison, once the stage for atrocities committed by Saddam Hussein, has been turned into a symbol of brutal occupation by a foreign force. The story of abuse by American soldiers broke at the worst possible time for the US-led Coalition Provisional Authority in Iraq, writes Middle East specialist Fawaz A. Gerges, in the second installment of a multi-authored, three-part series on US nation-building efforts in Iraq and Afghanistan. Gerges places blame for further deterioration in security and order on the discovery of Abu Ghraib prison abuse by Iraqis who were already angry about high unemployment and continuing civilian casualties. The timing and scope of the scandal puts another hurdle in the way of the struggling reconstruction effort. Irrespective of the small number of US soldiers who were involved in torturing and humiliating detainees at Abu Ghraib, and despite the White House's best attempts to quell the uproar, the general perception in Iraq now is of a domineering, oppressive American presence with little respect for the Iraqi culture. Public opinion surveys place majority opinion in Iraq firmly against the US and United Kingdom, and the lack of trust is spreading. In the face of mounting ill will, “the potential for armed escalation is very real,” Gerges writes. The US can lessen, if not avert, Sunni and Shiite insurgency and more chaos through immediate and transparent investigations, he argues. These investigations should not focus on just the handful who committed the abuse, but also on the higher-ups who remain in the penumbra of the scandal. Ultimately, Gerges concludes, placing sovereign governing power in the hands of Iraqis as soon as possible will smooth the road to repaired feelings and renewed trust. –YaleGlobal

Iraqi abuse revelations deepen distrust of US
Fawaz A. Gerges
Friday, May 28, 2004 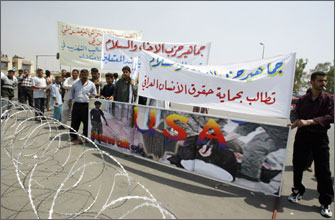 Iraqis march in Baghdad with Abu Ghraib abuse photo: The scandal reinforced their perceptions that Americans

have little respect for their culture or dignity. (Photo: AFP) Enlarged image

NEW YORK: The Abu Ghraib prison atrocities are exacerbating an already dangerous situation in Iraq. Morally and politically, the fallout from the abuse crisis is considerable. One of the major repercussions is Iraqis’ further loss of trust in the American-led occupation. More and more Iraqis say they have little confidence and faith in the willingness of the United States to assist them in resolving their country’s complex problems and establishing an authentic government that reflects their hopes and culture. Reports from Iraq show more Iraqis now view the US-led occupation as part of the problem, not the solution.

Before the revelation of the abuses of Iraqi prisoners in early May, a USA Today/CNN poll conducted throughout Iraq found that 57 percent of Iraqis said that American and British troops should leave Iraq immediately, even though 53 percent said that they would feel less safe. In contrast, early this year a majority of Iraqis said they wanted American and British troops to remain in the country until the transfer of sovereignty. Also alarming is that 71 percent of Iraqis said they viewed the coalition forces as “occupiers,” not “liberators,” compared with 43 percent immediately after the invasion. A majority of Iraqis also said they trust the United Nations more than the United States to act as an impartial broker and to assist them in forming a representative government.

Clearly, the alleged abuses of Iraqi prisoners could not have come at a worse time for the Coalition Provisional Authority. They have poured fuel on an already raging fire in Iraq and the Arab arena. In my conversations with Iraqis and Arabs, I sensed deep anger and boiling rage. Their response to the prisoners’ scandal ranged from shock to resignation. But unlike their American counterparts, many Iraqis do not seem to be surprised that their countrymen were abused by American soldiers. The revelations reinforced their perceptions that Americans have little respect for their culture or dignity and often use disproportionate force to crush their will. In this sense, the scandal has widened the cultural gulf between Iraqis and US troops and complicated further America’s efforts to transfer “limited sovereignty” to Iraqis and tighten its hold on Iraq’s future.

Field reports also paint gloomy portraits of Iraqis’ darkening mood, which does not portend well for the American-led occupation. Deteriorating security, widespread unemployment (more than 50 percent), and rising civilian casualties have driven more Iraqis to join the armed insurgency. According to American military commanders, fewer and fewer Iraqis than before are supplying coalition forces with intelligence about insurgents. As more Iraqis get estranged from the American-led occupation, the United States finds itself locked in a two-front ­ Sunni and Shiite – costly urban guerrilla war with no end in sight. 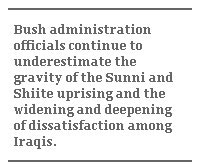 It is not fully clear yet if the escalation of violence has more to do with the approaching deadline for the transfer of power to Iraqis than with a genuine nationalist uprising. But Bush administration officials continue to underestimate the gravity of the Sunni and Shiite uprising and the widening and deepening of dissatisfaction among Iraqis. Recent reports from various Iraqi cities show a restive population fed up with the status quo. If not handled correctly, the crisis over Iraqi prisoners could push many neutral Iraqis to the opposition camp.

Militants of all political persuasions inside and outside Iraq are already using and abusing the scandal to fan anti-Americanism and to call for revenge. Iraq appears to have become a recruiting tool, if not a recruiting ground yet, for Al Qaeda as well as for all those who are opposed to American policies in the region. The crisis, in particular, is a welcome development for Al Qaeda and its affiliates which will exploit it to justify its broader war against America and its pro-Muslim allies.

In the next few months, the potential for armed escalation is very real. Gen. John Abizaid, the overall commander of operations in Iraq, told the Senate Armed Services Committee he expects an increase in violence after the transfer of power to Iraqis at the end of June. The assassination of the rotating president of the Iraqi Governing Council, Ezzedine Salim, is a case in point. And the gruesome beheading of Nicholas Berg could be an omen of bad things to come. Militants will likely try to outdo each other in attacking Americans and their allies in Iraq and beyond, pretending to punish the United States for its alleged abuse of Arabs/Muslims and for trampling on their honor and humanity.

Although there exists no magical wand that could immediately wipe out the stain of the abuse crisis, American officials must take concrete steps to limit its impact. President Bush’s partial apology to the Iraqi victims is a good step on the long road to healing. Also important was the high level visit to Iraq by Secretary of Defense Donald Rumsfeld and the military brass and his statement in Baghdad that there will be no “cover-up.” But on their own, these gestures will unlikely allay the fears of Iraqis or put their lingering suspicions to rest.

Full accountability and transparency will be much more effective than words. It is also not enough to hold a few rogue American soldiers accountable. The abuse scandal reflects a bigger political and moral failure on the highest levels in the Defense Department. Although President Bush decided against sacking Rumsfeld and is trying to weather the storm of public opinion at home and abroad, he must insist on full transparency of the investigation and full accountability as well. Nothing less will do. Americans and Iraqis are entitled to know how systematic, extensive, and widespread the abuses were and the role played by senior civilian and uniform officials in the Defense Department and the military. More than anything else, establishing the facts and meting out justice will go a long way towards rebuilding broken bridges of trust with Iraqis and Arabs.

On a broader level, the United States would magnify, not resolve, its problems if it limits the exercise of sovereignty by the new “caretaker government.” Last week, The Wall Street Journal quoted US officials in charge of the transfer plan as saying the new government “will have little control over its armed forces, lack the ability to make or change laws and be unable to make major decisions within specific ministries without tacit U.S. approval.” A transfer of power in name only will deepen Iraqis’ mistrust further and drive many of them into armed resistance. The transfer of power to Iraqis must be credible and genuine. The logic of the American-led occupation must be replaced with the logic of a legitimate Iraqi authority sanctioned and supported by the United Nations with the active participation of the world community.

Empowering Iraqis and sharing the burden of reconstruction in Iraq with the international community will serve vital American interests, not just peace and stability in the Arab heartland.

Fawaz A. Gerges is the Christian A. Johnson Chair in Middle East and international affairs at Sarah Lawrence College and author of the forthcoming “The Jihadists: Unholy Warriors” (Harcourt). He is a senior analyst for ABC television news.