Though the recent meeting between US President George W. Bush and Russian President Vladimir Putin ended predictably with handshakes and smiles, all is not well with bilateral relations. As Dmitry V. Suslov reports, the superficial glazing-over of fundamental disagreements, though a short-term diplomatic "band-aid," may do substantial harm to regional and international politics. Of vital concern, writes Suslov, are three primary issues: Russia's backsliding from democracy; simmering regional conflicts among former-Soviet republics; and increased cooperation between Russia, Iran, and Syria. In the end, Russia and the United States need one another - and would be best served by developing a comprehensive mutual global agenda. As natural partners for combating terrorism and stabilizing the Middle East, the two countries have a great deal riding on their shoulders. – YaleGlobal

Left unattended, the papered-over democracy divide will not sustain cooperation on anti-terror and other fronts
Dmitry V. Suslov
Monday, February 28, 2005 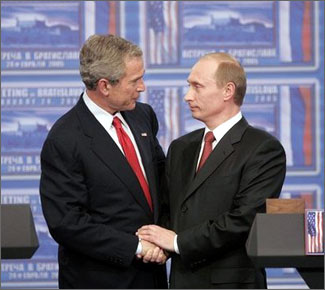 Hold on tight: Bush and Putin in Bratislava. The difference over democracy is serious enough to ultimately upset US-Russian cooperation. (Photo: Whitehouse)

MOSCOW: Last week's summit between Presidents Bush and Putin ended without acrimony. By accentuating the "positive" side of the ledger - enhanced cooperation in nuclear security and fighting terrorism - and relegating differences over democracy to second place, Bush also placed pragmatism over ideology. However, the leaders failed to design a new agenda, leaving relations still tense and fragmented.

Now, both sides face a crucial choice: Either Washington opts for selective cooperation in areas essential to US security, paying lip service to Russia's domestic situation, while "forgetting" about Russia in world decision-making - or both parties try to bridge the gulf, designing a cohesive global agenda. Should the United States choose the first course, things could end up badly for both parties.

The most serious reason for the US-Russia tension is Moscow's retreat from the accepted norms of democracy. The unfair 2003 parliamentary campaign; crackdowns on independent television; dismantling of oil giant Yukos to the benefit of senior officials; executive control over the judiciary; abolition of direct election of regional governors - all these actions eroded the platform of common democratic values undergirding US-Russian cooperation.

Also of crucial importance is the clash over the Commonwealth of Independent States (CIS) - namely, the controversial Ukraine elections and the so-called "frozen" conflicts: Abkhazia, South Ossetia, Nagorno-Karabakh, and Transnietria. After these regions declared independence from Georgia, Azerbaijan, and Moldova in early 1990s, the international community failed to recognize them as states. Even so, these states find Russia increasingly unattractive because of its authoritarian domestic policy, crude interference in neighbor's elections, and support for corrupt and unpopular elite. Meanwhile, dismayed by Russia's inefficiency, the United States now looks toward Georgia, Azerbaijan, Moldova, and Ukraine (where pro-American elites have taken power) to create a regional system of security, without Russia's participation. However, this would be impossible without first ensuring the territorial integrity of the disputed states - that is, resolving those conflicts.

Washington views Moscow as the primary force behind the unrecognized states' independence. Moreover, Russia's regional conduct, coupled with its retreat from democratic standards, revives old fears about Russian imperialism. This can result in only one policy: Pushing Russia out of the CIS.

Also troubling are Russia's relations with Iran and Syria. Moscow consciously speeded up cooperation with them on the eve of the Bratislava summit, a sort of "asymmetric reply" to the US involvement in Ukrainian elections and opposition movements throughout the CIS. If this cooperation turns out to be not just a tit-for-tat, but more a demonstration of Russia's decision to bury the past policy of cooperation, this could bode ill for both Russia and the United States.

Why the emergence of these contentious issues? The common Western response, blaming Putin, is misplaced: The fundamental problem lies with the people around him, the lack of transparency in state machinery, and an inability to listen to civil society and the international community. A substantial segment of the Russian elite (the so-called "political technologists" and corrupt bureaucracy) has demonized the United States in order to protect their sizeable incomes from nationalization of assets, as well as for "accomplishing" (usually ineffective) foreign policy "missions," such as getting Russia's favorite candidate elected in Ukraine.

Indeed, democracy and a transparent market economy would disturb their cushy jobs and shadowy incomes; these US demands would be suicidal for their careers. Thus, their emergence as the strongest opponents of Western "interference" in Russian internal affairs is not surprising. Moreover, having lost all foreign policy advantages Russia previously enjoyed, Putin's advisors cannot be expected to blame their own incompetence. Instead, they have tried to convince Putin of US complicity in the majority of Russia's troubles.

Putin's acceptance of these conspiracy theories would be self-defeating; they completely counter his previous foreign policy course. From Soviet-era experience, he should know that open confrontation with the West would result in collapse of the country. However, the whispers of "American plots" seem to have monopolized Putin's ear. His inner-circle members were the only ones he trusted five years ago, and they made best of it. In his first term, Putin still could resist and overplay their influence. Despite their objections, he granted the US military access to the Central Asia. Now, facing shocking state inefficiency, as seen in the Beslan tragedy, and considering sometimes arrogant and ineffective American policies (Iraq, for instance), Putin is losing his independent judgment.

This basic mistrust explains the patchy Bratislava accord: selective cooperation in some areas (nuclear terrorism, arms control), confrontation on the other (democracy, CIS, Iran), and mutual alienation on the majority of issues. If the agenda is not broadened in a coherent fashion, it has poor chance of success.

Russia's modernization is impossible without the United States. Decision-making in world policy is also dependent on relations with Washington. For the United States, a declining agenda with Russia will sooner or later result in overextension of US resources and global disaster. Short- and middle-term reasons for engaging Russia lie in policy toward North Korea, Iraq, Iran, and China, and the long-term - in the broader Middle East. Russia, with its imperial history, vast experience, and readiness to invest in security, is the only US ally capable of collaborating to bring about Mideast stability- a rather imperial, but necessary mission. Neither Europe nor the southern CIS have the resources to accomplish the task. Despite an EU presence in Afghanistan and some contribution to Iraq, Europe's political culture and growing Muslim populations do not allow for serious investments in missions like occupation and state-building.

Ultimately, Washington and Moscow must work together, despite all the difficulties and prejudices. They should strengthen those elements of agenda - creating the NATO-Russia Council and Russian participation in the G8 - that may still facilitate cooperation and joint action. The US-Russia foreign policy priority should be stabilization and governance promotion in the broader Middle East. Radical Islamic terrorism and nuclear proliferation are facets of one single problem: degradation of this region.

Putin's appreciation of power - and his readiness to use it - could allow him to realize the objective necessity to become a good US partner, but only if Russia's almost desperate domestic situation is changed, or at least better managed. "Containing Putin's authoritarianism" is already off the Bush agenda. Russia's domestic situation is so unstable and explosive, its state apparatus so ineffective, and the majority of bureaucrats so frightened (and deaf at the same time), that an overt attempt to stop Putin would produce an opposite result: a severe blowback on the part of the regime, which would finally destabilize the situation altogether. However, a disaster might come even sooner should the US consider a "regime change" in Russia itself. Most likely, the result would be either total chaos - with an uncontrollable nuclear arsenal - or an authoritarian nationalist regime.

The outlet for the United States to strengthen Russian democracy is through continuing dialogue with Putin, and cautious actions that disprove his advisors' arguments. Possibilities include real support to stabilize the CIS, avoiding indirect help to Chechen separatists, easing access of Russian non-fuel goods to the Western markets, and strengthening Russian civil society by intensified US-Russian civil society dialogue. The Bush administration must convince Putin that it is truly interested in a stable, strong, and integral Russia. As for the foreign policy agenda, its basis should be stabilization and governance promotion in the broader Middle East.

Dmitry V. Suslov is Deputy Director on Research at the Council on Foreign and Defense Policy, Moscow, Russia.