US senators can submit questions for 16 hours over two days during the impeachment trial of President Donald Trump. Early questions are short and pointed, exposing partisan polarization, seeking affirmation rather than new information. Democrats want witnesses, especially testimony from former national security advisor John Bolton who addresses the impeachment charges in a book with a March publication date. Republicans suggest that the House of Representatives presented an incomplete case and should not expect the Senate to call witnesses. Republicans hold a majority in the Senate and can approve acquittal or witnesses. The first question, addressing the challenge of the president having mixed motives, came from three Republicans who may be considering witnesses. Any mixed motivation that includes some public interest “destroys their case,” argued the Patrick Philbin, deputy White House counsel and member of the president’s defense team. The conclusion: Personal interest and policy outcomes are inextricably linked. If senators hold concerns about motives, argues Rep. Adam Schiff, lead impeachment manager, then they should require testimony from Bolton. – YaleGlobal 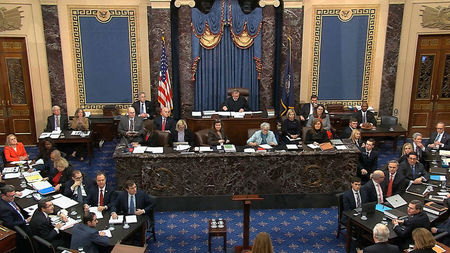 How should the Senate consider more than one motive on Article I?  (Senators Lisa Murkowski, Susan Collins and Mitt Romney)

There are always personal interest in policy outcomes – that is part of representative democracy – and that cannot be the basis for removing the president from office, argued Patrick Philbin, member of the defense team. He went to suggest that the alleged Biden conflict of interest has not been investigated and if concerns are deemed legitimate, “their case absolutely fails.” Biden served on the Burisma board of directors from 2014 to 2019, and the Justice Department under Trump has had more than three years to order such an investigation.

If the senators have questions about motive, they should request to hear from witnesses, especially former national security advisor John Bolton, who spoke directly with the president. “Don’t wait for the book for the answer to your question,” said Rep. Adam Schiff, lead impeachment manager.

Is there any way to have fair trial and render verdict without testimony from Bolton, Mulvaney and other key witnesses along with relevant documents?

The short answer is no, said Schiff

Schiff explained they asked him and others to testify. All declined except Fiona Hill and Alec Vindman. When threatened with a subpoena, Bolton and other high-level aides to Trump threatened to counter-sue and tie the requests up for months in courts.

The House managers did not meet the burden of proof: transcript of call shows the president nothing wrong, the Ukrainian president said he felt no pressure, Ukrainians did not know the military aid had been blocked until the end of August, the president insisted there was no quid pro quo and the aid was released on September 11.

Trump’s counsel says there is no evidence the president linked Ukraine military aid to investigations of a political rival. Is that true?  (Senator Dianne Feinstein)

The evidence is overwhelming, said Rep. Jason Crow, House manager: the secrecy surrounding Ukraine aid, the Oct 17 press conference with Mick Mulvaney in which he admitted policies could have political purposes, the Sept 7 Sondland telephone call with Trump, and the Bolton manuscript that suggests Trump admitted aid was linked to the announcement of investigations.

Can the president be impeached if he abuses power but does not violate any laws? (Senator Jeanne Shaheen)

“The framers intended the impeachment to reach the full spectrum of presidential misconduct that threaten the Constitution,” argues Rep. Sylvia Garcia, House manager. “They also intended that our Constitution endure throughout the ages… sufficiently general and flexible to meet unknown future circumstances…. The framers intended impeachment for three principle forms of wrongdoing… A) abuse of power, B) betrayal of national interest or foreign entanglements and C) corruption of office and elections…. ”

Why did the House of Representatives not challenge the claims of executive privilege during House proceedings? (Senators John Kennedy and Blackburn)

The White House issued letters, including case law, and relied on the Doctrine of Absolute Immunity, the defense team countered. Philbin suggested that the House of Representatives, in a hurry for impeachment, chose not to challenge the president’s responses in court.

Trump’s counsel claims there was no harm done, aid was ultimately released to Ukraine. What is your response to those claims?

The US promised to support Ukraine for giving up its nuclear weapons in 2014. Ukrainian troops continue to die on the front lines, argued Rep. Val Demings, House manager. Senators had to pass additional laws to ensure the delivery of the aid. The delay sent a message to Russia and undercut Ukraine’s ability to negotiate with Russia.

Does it matter if it was quid pro quo? Is it true that quid pro quos are often used in foreign policy? (Senator Patrick Leahy)

Some quid pro quos are legitimate and some are corrupt, argued Schiff. Aid comes with conditions, and  a request to investigate a political rival is not legitimate.

The defense team argues the House of Representatives should have gone to court, and agreed they would have argued the courts do not have jurisdiction.

The defense team described the House case as improper, rushed, half-baked and argued if witnesses are allowed, the Senate can anticipate more impeachment trials and disruption in law-making.

If the president were acting in the interest of national security as he alleges, would there be documentary evidence to substantiate that claim? If yes, has such evidence been presented by the president’s counsel? (Senators Brian Schatz and Feinstein)

Responsible agencies were kept in the dark about the block on aid for Ukraine, argued Crow, and the defense team has not shown a valid, legitimate policy objective for the block. ” If over and over again… that the president was simply was pursuing a valid policy objective….if this was a specific debate about policy, a debate about corruption, a debate about burden showing, then let’s have the documents that would show that.  Let’s hear from the witnesses that would show that. Because the documents and witnesses we have show the exact opposite. 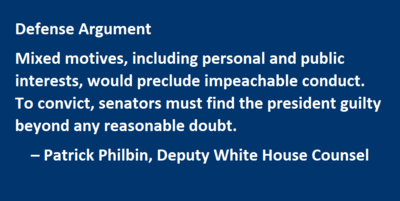 If President Obama had evidence that Mitt Romney’s son was being paid by a corrupt foreign company, would he have the authority to ask for an investigation?

The president can turn to the Justice Department for legitimate investigations, but not for political investigations. “Under no circumstances do you go outside your own legitimate law process whether you think there is cause or not,” said Schiff. “It’s remarkable to me that we even have to have this conversation…” Schiff reminded that the FBI director has advised political candidates, if solicited with an offer of foreign help, to turn it down and contact the FBI.

Does the phrase “other high crimes and misdemeanors” require a violation of the criminal code, or is a breach of public trust sufficient? (Senator Gary Peters)

Describe in further detail that all subpoenas issued prior to the passage of HR 660 are an exercise of invalid subpoena authority by the House committees.

The defense team argues that 23 subpoenas issued by House committees are invalid and should have waited until the full House of Representatives approved a resolution on impeachment.

Did the president express concern about Hunter Biden serving on the Burisma board prior to Joe announcing he was entering the US presidential race? (Senators Lisa Murkowski and Susan Collins)

The defense team did not provide a specific example.

Still, Philbin later concluded that the senators, to convict, must find the president guilty of acting in self-interest beyond any reasonable doubt, seemingly regardless of consequences.

The House managers argue depositions could be compiled quickly. The defense team warned that both sides could call witnesses, and the trial could last weeks or even months.

Are there legitimate circumstances under which a president could ask a foreign country to investigate a political rival not under investigation by the US government? If so, what are they? (Senators Collins, Roy Blunt and Marco Rubio)

Valid circumstances for the president to request an investigation into a political rival would be difficult, argued Schiff. He went on to suggest the US Justice Department could open an investigation, acting independently and in good faith, or a request could be filed under the Mutual Legal Treaty to gather evidence.

Schiff went on to point out, if a defendant’s motive includes any level of corruption, then he should be found guilty.

The Logan Act prohibits any US citizen without the authority of the US from communicating with any foreign government with the intent to influence that government’s conduct in relation to the United States. Will the president assure that private citizens will be directed not to conduct foreign policy unless formally designated by the president and the state department to do so? (Senators Krysten Simena, Joe Manchin, Murkowski and Collins)

There was no conducting of foreign policy by a private citizen, Philbin responded. Rudolph Giuliani was a source of information for the president, not carrying out policy directives but rather offering advice to the Ukrainians on how to meet anti-corruption expectations.

The president’s policy is to abide by the laws, Philbin said, but he was not in a position to make pledges for the president. He added there is a long history of presidents relying on emissaries and confidants to send and receive messages with a foreign government.

Should the president be impeached if a majority of the House believes he investigated an individual for the wrong reasons?

Philibin, returning to mixed motives, argued the president should not be impeached if there was a “legitimate basis for asking a question… a legitimate national interest.”

Most political officials have an eye on the next election and how their actions and policy decisions will be perceived by the electorate, responded Philbin.  “There is nothing wrong with that…. Impeaching a president entirely on a theory of abuse of power that depends entirely on subjective motive … ends up becoming a standard so malleable that it’s really a substitute for policy difference.”

Schiff agreed that elected officials hold political motivation, but pointed to crimes and remedies political in nature. He urged the Congress to draw a line between corrupt and non-corrupt activity.

NOTE: This article was updated on January 30 with additional questions and responses.

The recent Senate Impeachment Trial without admitting witnesses is utterly disgraceful and will set a precedent for future trial in the country. It will also send a strong signal to rest of the world about hypocracy at home.