After concerns that it had been distracted by the ongoing war in the Middle East, the Bush Administration is again focused on how to confront the rise of Chinese power in Asia. The US has found a strong bilateral relationship with Vietnam—one of Beijing’s longstanding rivals—to be instrumental in its approach to that challenge. US relations with Hanoi have come a long way since 1995, when they focused on issues left over from the Vietnam War: now, Washington sees its onetime foe as a rising economic and political leader in Southeast Asia, and both parties see each other as key players in maintaining a stable Asian balance of power. To that end, Vietnam and the US have made a number of security agreements that seek to create a strong political counterbalance to a rising China. The intimacy of this relationship should not be overstated, though: the communist government in Hanoi remains deeply suspicious of Washington’s policies on democracy, human rights, and religious freedom. Nevertheless, their shared interests mean that Vietnam and the US should continue to develop their partnership as they look to maintain Asia’s stability in the future. – YaleGlobal

The absence of any strategic conflict and important areas of strategic convergence should see it grow
Raymond Burghardt
Tuesday, November 22, 2005 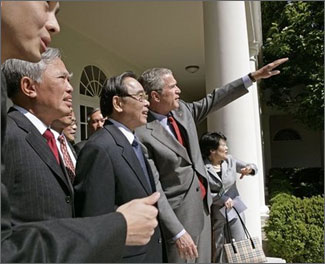 HONOLULU: After lingering in the shadows of American foreign policy Vietnam has emerged as an important partner. However, Vietnam’s geopolitical situation and political and economic constraints are likely to result in a cautious growth in the relationship.

By mid-2003 one oft-repeated message the administration heard from opinion leaders in Japan, India, Indonesia, Singapore, and Vietnam, was that while the US had been distracted with Afghanistan and Iraq, China’s regional influence had been increasing at America’s expense. Vietnam’s leadership authoritatively conveyed its concerns about America inattention to Asia during Deputy Prime Minister Vu Khoan’s visit to the United States in early December 2003. Khoan alluded to these concerns in his public remarks and was even more forthright in his private meetings with Secretary of State Powell and National Security Advisor Rice. By the last year of Bush’s second term, the issue of how to engage with a rising China was once again the main focus of US Asia policy.

As the second Bush administration team settled into office, President Bush and Secretary Rice both stressed that US – China relations were “complex” or “complicated.” Former Secretary Powell’s frequent comment that Sino – American ties were “the best ever” was no longer en vogue.

In its place are new indications of strategic distrust between Beijing and Washington. China fears that the US seeks to block its rise to great power status, viewing the strengthening of US ties with countries such as Japan, India, and Vietnam, as aimed at least in part at containing Beijing. The fundamental issue for Washington is whether Beijing is challenging the US role as the balancer and guarantor of Asia’s stability.

An important speech in New York last September by Deputy Secretary of State Robert Zoellick laid down markers by which the Bush administration would evaluate Chinese behavior. He said that “uncertainty about how China will use its power will lead the US

- and others as well - to hedge relations with China.” With the Chinese-backed East Asia summit in mind, he warned that China should not attempt “to maneuver toward a predominance of power” by building separate alliances in Asia.

Recent developments in US – Vietnam relations exemplify current priorities in America’s Asia Policy. In the early years after normalization in 1995, American policy toward Vietnam was focused on dealing with historical issues left over from the war: accounting for the missing in action (MIA’s); reuniting the families of refugees; and humanitarian programs aimed at developing trust between the two peoples. As ties strengthened, trade grew rapidly, especially after the Bilateral Trade Agreement (BTA) was signed in December 2001.

For most of the ten years since normalization, US policy toward Vietnam was not driven by geo-strategic objectives. But the administration increasingly recognized Vietnam’s potential for continued rapid economic growth, its potential to play an increasingly important role in Southeast Asian regional organizations and therefore its “strategic potential”.

In a policy of hedging relations with China, Vietnam, with its long history of troubled relations with its huge neighbor, is an obvious partner. The shift towards closer US-Vietnam links came after a June 2003 Communist Party Plenum, which focused on reassessing the country’s national security policy. In private and even some semi-public meetings, authoritative Vietnamese officials specifically raised the Chinese angle in their newfound enthusiasm for the US. As one important foreign policy official put it to me, “the triangle is out of balance.” He noted that while Vietnam’s relations with China had improved a great deal in recent years, US – SRV (Socialist Republic of Vietnam) ties had lagged. Meanwhile, he said, China’s influence in the region had grown. Over the past two years, Vietnamese officials and think tank experts have expressed regular concern over China’s rapidly deepening ties with Cambodia, Laos, Burma and Thailand. 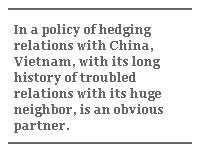 In the second half of 2003, the Vietnamese government selected improved military-to-military ties as one of the first steps toward a deeper relationship. Vietnam’s leadership informed me around September 2003 that Defense Minister Tra was ready to accept the US invitation to visit Washington made by Secretary Cohen during his 2000 visit to Hanoi. We quickly arranged for Secretary Rumsfeld to issue a new invitation. The Vietnamese government also approved our long-standing request for a US naval port call -- for the week after Tra’s visit to Washington. Vietnamese officials commented to us that these events would be high profile: Vietnamese people and Vietnam’s neighbors would immediately understand that the U. S. S. Vandergrift steaming up the Saigon River symbolized a significant improvement in bilateral ties.

Nineteen months later, Prime Minister Khai’s visit to Washington in June 2005 (the first by an SRV chief of state) marked another symbolic milestone. His visit saw agreement to bring Vietnamese defense officials to the US under an international military education and training (IMET) agreement, the fruit of years of difficult negotiation. Hanoi and Washington also announced that they would increase intelligence-sharing and other cooperation in fighting terrorism and other forms of transnational crime, such as drug smuggling and human trafficking. The final paragraph of the joint statement contained an allusion to shared strategic goals:

“The President and Prime Minister shared a vision of peace, prosperity, and security in Southeast Asia and the Asia-Pacific region, and they agreed to cooperate bilaterally and multilaterally to promote these goals. “ That reference to the Asia Pacific region as well as Southeast Asia was interpreted by some analysts to evince US interest in having a good relationship with Vietnam as a counterbalance to China, not necessarily militarily, but politically.

Broadening strategic alignment between the US and Vietnam is an important development, but should not be exaggerated. Vietnam, while valuing America’s role in maintaining a regional balance of power, remains deeply suspicious of American proselytizing for democracy, human rights and religious freedom seeing in them elements of an insidious plot to undermine Communist Party rule through “peaceful evolution.”

This deep-seated suspicion has slowed the rate of cooperation between law enforcement and intelligence agencies, which is lagging behind bilateral military cooperation.

In the military arena, there have been three US Navy ship visits so far, close collaboration in the field of military medicine and a number of humanitarian construction projects carried out by the Pacific Command. In the future, the Navy would hope to be able to purchase supplies in Vietnam, perhaps even conduct repair and maintenance work.

While Vietnam will keep looking over its shoulder to ensure that big brother China has not been unduly provoked, US – Vietnam ties should progress. Our two countries have no strategic conflicts and some important areas of strategic convergence.

Raymond Burghardt is Director of East-Seminars at the East-West Center, Honolulu and former US Ambassador to Vietnam (2001-04).