Uzbekistan: A Third Front in the War on Terrorism?

The US-led war on global terror may face a new challenge in Uzbekistan, a Central Asian country infrequently featured in news headlines outside the region. Charles William Maynes, President of the Eurasia Foundation, argues that US policy toward Uzbekistan is failing to curb the rise of radical Islam. Recent suicide bombing attacks in the cities of Tashkent and Bukhara are symptoms of the country's instability, despite having American occupation forces just next door in Afghanistan and an operational airbase in Uzbekistan as well. The government in Tashkent has pursued a tough policy of political repression that has created 6,000 political prisoners - some arrested for the 'offense' of wearing a beard. And on the economic front, Uzbekistan has shown itself adamantly anti-liberal and anti-foreign as well. Rather than continue to cozy up to this sort of ally in the name of fighting terrorism, Maynes argues, Washington should press Tashkent to gradually liberalize both politically and economically, beginning with granting Islamic parties the right to run in local elections and legalizing the exchange of non-food items in the markets. By seeking reconciliation with its opposition, the government of Uzbekistan would make great strides towards stabilization. Otherwise, Maynes cautions, policymakers in both Tashkent and Washington could find themselves facing a much larger terrorist threat. - YaleGlobal

Uzbekistan: A Third Front in the War on Terrorism?

Unless handled with care, it could become a self-fulfilling prophecy
Charles William Maynes
Monday, April 5, 2004 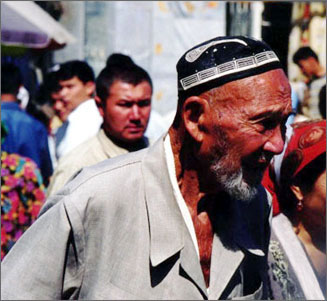 An Uzbeki man in a Tashkent market: A developing sense of hopelessness may be behind the recent spate of violence.

WASHINGTON: Most Americans cannot find the country on the map, yet since last week their papers have carried headlines about terrorism in such exotic Uzbek cities as Tashkent and Bukhara. Is Uzbekistan a new front in America's war against terrorism?

The attacks caught the attention of analysts for two reasons. They involve female suicide bombers - never before seen in Central Asia - and call into question for the first time the effects of the war in Afghanistan.

Terrorist attacks are nothing new to Uzbekistan. Following an outbreak of violence in 1999, however, the Uzbek government's harsh repression of Islamic forces seemed to contain the terrorist threat. The American occupation of Afghanistan was thought to diminish the problem even further, as it supposedly shut down the safe haven of the Islamic Movement of Uzbekistan (IMU), a group behind the earlier attacks.

Believing the IMU gone, the Uzbek Government initially blamed the latest attacks on Hizb-ut-Tahrir (HT), a group that calls for change of the secular regime that emerged out of the ruin of the Soviet empire but proposes to accomplish it peacefully. The HT denied the charge, and the Uzbek government subsequently shifted blame to Al Qaeda. Meanwhile, Western diplomats in Tashkent suggest that a revived IMU may be responsible. Whatever the truth, the bombings provide a convenient excuse for the Uzbek government to increase the level of repression.

No outsider now knows who is behind the bombings. Meanwhile, the immediate question is what can be done to lower the social tensions inspiring young Uzbekis to blow themselves up.

According to many reports, Uzbekis are developing a sense of hopelessness about the future. According to State Department figures, Uzbekistan has around 6,000 political prisoners, more than the Soviet Union in its final decades. Many of those arrested have gone to jail for wearing a beard or displaying some other form of piety. Torture and mistreatment in the jails are well-documented.

And the country is hard-pressed economically. The government recently accepted Western demands for currency convertibility but then made trading with the outside world more difficult so as to shelter the local economy. A traveler crossing the Uzbek border sees police mistreating local peddlers as they try to earn a living by moving goods from one country to another. Because of ruthless confiscations of property at the border, several of these peddlers have self-immolated themselves in protest, a step not too far from suicide bombings.

Locals contend that prostitution and crime are soaring as people find no other way to earn their way. Yet fearful of the political consequences of suddenly opening up the economy or relaxing political controls, the Uzbek government has decided to press the local population even harder. Rather than lower the risk of terrorism, though, the combination of severe repression and impoverishing economic policies could breed a desire for revenge at any cost.

Still, the United States faces a dilemma in urging Uzbekistan to alter course. Uzbekistan is vital to the pacification of Afghanistan. It is no accident that immediately after September 11, US policy toward Central and South Asia veered sharply in a new direction. Prior to the attacks, the US had testy relations with countries there, particularly Pakistan following its nuclear test. And, the US gave hints of disengaging from Uzbekistan because of its poor record in the transition from Soviet rule to a free market and open society.

The day after September 11, the US recognized that it could not overthrow the government in Kabul unless it had two things - proximity to the problem and intelligence about its nature. Pakistan and Uzbekistan could offer both.

Today the US maintains a semi-permanent airbase in Uzbekistan. The Pentagon will be reluctant to lose that base so long as the political situation in Afghanistan remains uncertain.

In effect, US policy in Uzbekistan is struggling to ride two horses at once. One is the security horse. The other is the democracy horse. So far they have run roughly in parallel, but will that continue?

Prior to the recent attacks, US policymakers believed the increased regional security provided by the US occupation of Afghanistan would give Uzbekistan's government the confidence to risk political openness and economic experimentation. But the recent violence suggests that the occupation of Afghanistan does not provide adequate security for the countries to the north.

Until recently, arguing that it had solved Uzbekistan’s security problem, the US could press Uzbekistan to take minor but symbolic steps of liberalization. And, though most outsiders contended that the progress was slight, US officials could point to some attempts at reforms.

Now a moment of truth is approaching. If the Uzbek Government, in response to the recent terror attacks, increases repression and further limits citizen freedoms, what should the US do?

In some ways, the situation in Uzbekistan is like a human pressure cooker. If the top is lifted suddenly, there may be an explosion. The economy probably could not survive an immediate opening of the borders. Political life might prove unacceptably radical if all normal freedoms were instantly granted.

No Western power wants Uzbekistan governed by the Hizb ut Tahrir, which calls for the restoration of the Caliphate and for harsh treatment of women. It would therefore be a mistake to demand full Western-style democracy immediately.

Rather, the US must insist that the Uzbek government turn the heat down and encourage the adoption of a program for controlled relaxation both politically and economically. For example, the regime should begin releasing political prisoners convicted of such minor 'crimes' as wearing a beard. It should take vigorous steps to eliminate the practice of torture.

Over the longer run, the West could urge the government to adopt a strategy toward radical Islam similar to the one adopted toward communist parties in Western Europe. These parties initially were not allowed into the central government for many years, but they were permitted to participate in local elections until they learned the limitations of their proposals.

To deny the Islamists any political role is only to turn up the heat under the pressure cooker. To integrate them gradually into political life is a step toward reconciliation.

A similar policy of measured relaxation is required in the economic area. The regime could again allow the bazaars to resume the exchange of non-food items. It could gradually open its borders to outside trade. It could progressively improve conditions for foreign investors.

In short, the status quo prior to the recent violence in Uzbekistan is no longer viable. Uzbekistan will either embark on a path of much greater repression or it will accept a path of paced reform that might enable the government to get through this crisis intact. If it chooses the path of repression, it seems fairly certain that along with Afghanistan and Iraq, the United States and its allies will face another center of terror exporting unrest.

Charles William Maynes is President of the Eurasia Foundation, which supports efforts and political and economic reform in the former Soviet Union.