Many predict a great victory for populist democracy in the Ukrainian recall elections on December 26th. That same day, writes Paula Newberg, democracy will also suffer a great blow in Uzbekistan's elections. Repression and poverty have stifled the country's economic and political ambitions since the fall of the Soviet Union. And its current president, Islam Karimov, strongly believes that "order is imposed, not grown." According to Newberg, a brief period of free public discourse in Uzbekistan has yielded to consistent mistreatment of human rights workers, repression of opposition, and a manipulation of the terrorist threat for political gain. On paper, Uzbekistan maintains the semblance of a democracy, but as Newberg concludes, the façade will collapse under international and domestic scrutiny: "Georgians, and now Ukrainians, have taught us that insularity generates curiosity, curiosity produces impatience, and impatience can topple governments, risk economic development, and ultimately, threaten the entire state system." – YaleGlobal

Upcoming staged elections in Uzbekistan will not be good news for the country nor for Russia and the West
Paula R. Newberg
Monday, December 20, 2004 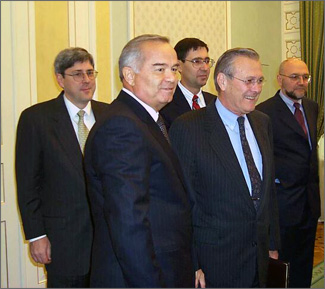 WASHINGTON: When Ukraine returns to the polls on December 26th to elect a new president, the world hopes to celebrate the defeat of entrenched corruption and the rise of populist democracy. On the same day, and in the shadow of Ukraine's anticipated victories, Uzbekistan, too, will hold an election. Few outsiders will notice this parliamentary exercise. Most who do take note are rightly convinced that the government's pre-election manipulation will produce an unquestionably undemocratic result. December 26th will therefore pose a stark electoral contrast between Ukraine's dreams and central Asia's political regression. The fraught, fragile distance between them challenges not only Eurasia's capacity to develop democratically, but also the depth of democratic commitment among its allies in Washington and, perhaps, Moscow.

Uzbekistan's sad descent into repression and poverty reflects the difficult balancing act that we benignly call "political transition." Uzbekistan began its life as an independent state in 1991 with a seemingly stable economy, an educated population, claims to the Silk Road's culture, and ambitious post-Soviet plans. But Uzbekistan was insecure: Without Moscow's subsidies, its economy was weaker and its polity more divided than Uzbeks had assumed. Long central Asia's land bridge between nomadic and settled societies, its fertile crescent – a cotton economy since Soviet times – has nurtured a succession of feudal, Islamic, communist, and nationalist political cultures. Landlocked Uzbekistan shares its borders and population with every other central Asian state, and since independence has confronted (and contributed to) risky irredentist political movements in the Fergana valley and Afghanistan. Those porous borders have left it prey to extremist incursions and potentially, terrorism.

President Islam Karimov, a communist-era veteran who knows how to keep cities clean and roads paved, believes that order is imposed, not grown. For 13 years, he has kept a tight lid on politics, and his western interlocutors have wavered between accepting and condemning his political views and repressive habits. Karimov is the in-between autocrat in a region dedicated to constancy in rule rather than the vagaries of self-government: He is neither outwardly free-wheeling like Kyrgyzstan's Askar Akaev nor protecting a personality cult as Turkmenistan's Saparmurat Niyazov so avidly does. The global anti-terrorism coalition suits Karimov perfectly; the United States formally validated his right to suppress anti-government militancy, and Uzbekistan provided military bases for the Afghanistan war. To keep things interesting, it flirts every so often with Russia.

But three years ago, when Uzbekistan signed its stability pact with the US, there was also a glimmer of hope for better governance. Karimov offered to open the political system, just a little bit. Media, non-governmental organizations, even political parties were given a little more space to operate. Students in Bokhara organized polite public policy discussions to test their political elders, disaffected Tajik nationalists in Samarkand aired familiar complaints in local newspapers, and political parties began to talk, tentatively and awkwardly, about constituency politics.

True, real opposition was constrained if not wholly prohibited, human rights advocates were treated badly, and torture and imprisonment continued. Every government minister spoke first about countering terrorism, and only then about the political opportunities that would arrive when the fear of terror abated. Uzbekistan managed to convince observers and perhaps even Uzbeks themselves that controlled change – and the 2004 parliamentary elections – might succeed.

The honeymoon was short. Today, government ministers rarely talk much about extremists. Afghanistan and Tajikistan are quieter, and the Islamic Movement of Uzbekistan doesn't capture anyone's headlines. Instead, ministers publicly proclaim a "new Uzbekistan" that has learned to "understand criticism and ... respect the diversity of different views." Government now seeks witnesses to a political transformation that it insists conforms to international standards. For reformists, however, this purported success feels more like failure.

In the past two years, the Uzbek government has sounded and acted more like its old self than the new one it was striving to become. Just as it did before the 1999 elections, Tashkent has limited television broadcasts, harassed international NGOs (like Human Rights Watch) or closed them (like the Soros-funded Internews), frozen the accounts of dozens of local NGOs, and cancelled their grants. Opposition candidates and their families are persecuted; the 6 am knock on the door has returned to central Asia. Government enfranchises obedient individuals rather than its own pliant political parties, replacing the uncertainty of elections with a heavy dose of predictability.

Every Uzbek watcher diagnoses this political closure differently. Pessimists surmise that the western coalition's security umbrella assures the authorities that they needn't change their ways. But those who challenge Uzbekistan – western governments, multilateral financial institutions like the European Bank for Reconstruction and Development, human rights groups, and occasionally even its own citizens – expect a response, not a turned cheek. So others assume that uncomfortable criticism leads the Uzbek government simply to circle its wagons. Some western diplomats suggest that Karimov only knows how to run a Soviet-style state, and therefore does so; others think that the ties of traditional, clan-based societies override economic and political reform and account for fiscal missteps and corruption. To reformists and activists, these conclusions seem to justify inaction by the same foreign governments that preach democracy elsewhere.

A truth of sorts lies among these conjectures. Like an old command economy, the Uzbek state writes rules in order to follow them. Inevitably, bad laws follow reasonable ones, and the rule of law – and any hope of economic resiliency – is lost. Democracy manuals say that parties are needed, so they're created, regulated, registered, and populated – by the state. In place of a free press, approved organs report the government's agenda. If parliament is required, then surely, parliaments can be created through a network of bureaucrats whose loyalties lie with the state, not with fractious, changeable voters. Like Alice's experiences with her looking glass, "the books are something like our books, only the words go the wrong way."

The authorized version of Uzbek politics shrouds alternative politics in silence. On the peripheries of official Uzbekistan, independent journalists and feisty politicians risk the state's opprobrium. But their actions go unheard and unseen by Uzbek citizens. Reporters cover government-sanctioned parties but can't write about those that government refuses to register. Even uncontroversial NGO statements are absent from public view, and public actions – like protests against the recall of an outspoken British ambassador, who complained frequently about rights abuses – yield punishment but little attention.

Willing ignorance on its educated citizenry has created what Uzbek journalist Karim Bakhriev calls a "tragic paradox of Uzbek reality": it's hard to believe what the President says, but no one quite knows what anyone else believes, either. Officially, dissent doesn't exist; unofficially, obedience probably doesn't, either.

This might seem an expedient tactic for assuring a quiescent parliament, but it's a dangerous strategy for ensuring stability and democracy. The foreign ministry issues regular reminders that "every country has the right to seek its own way." Fair enough. But Georgians, and now Ukrainians, have taught us that insularity generates curiosity, curiosity produces impatience, and impatience can topple governments, risk economic development, and ultimately, threaten the entire state system. If central Asia is to overcome its current travails, Tashkent, Washington, and Moscow must heed this lesson.

Paula Newberg is a Guest Scholar at the Brookings Institution, and recently returned from visiting central Asia on behalf of the National Democratic Institute.

© 2004 The Yale Center for the Study of Globalization