Although Vietnam had hoped to join the WTO before that body’s December ministerial meeting, an accession deal is not likely to finalized before mid-2006. Still, Vietnam’s eagerness to join the global trading system marks a noteworthy ideological shift for the ruling Communist Party, writes Jordan Ryan, the United Nations Development Program Representative in Hanoi. Vietnam’s Communist leaders once rejected capitalism, fearing that it would allow imperialist powers to maintain their hold over the country. Now the party has made trade and foreign investment a central part of its economic strategy. Vietnam’s re-integration into the world economy has proceeded at a breakneck pace, with exports of almost US$30 billion last year. Yet in its rush towards prosperity, concludes Ryan, the country must take care not to neglect its poorest citizens. - YaleGlobal

The government embraces capitalism, but so far only for small businesses
Jordan Ryan
Thursday, December 15, 2005 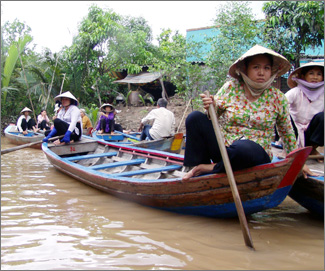 HANOI: Nearly two decades after launching economic reforms, Vietnam is well on its way to achieving Ho Chi Minh’s nationalist dream of independence and prosperity. But the nation’s first president would not have envisioned the process: Instead of opposing the march of international capitalism, the new Vietnam has embraced it. If the country is to make the most of globalization, the government will have to give free rein to local as well as foreign businesses.

Although Hanoi had hoped that negotiations would be completed in time for this month’s WTO ministerial meeting in Hong Kong, Trade Minister Truong Dinh Tuyen conceded recently that the country is unlikely to join WTO before mid-2006. Hanoi has inked 21 bilateral deals including those with the European Union, Japan and China, but must still finalize agreements with five countries including the United States and Australia.

Whenever it occurs, accession to WTO will stand as the crowning achievement of Vietnam's reform program launched in 1986. The reforms, known locally as doi moi or renovation, set in motion Vietnam's transition from a centrally planned to a market economy, and opened the way for liberalization of trade and inward investment policies.

The nation’s reintegration into the world economy has proceeded at a rapid pace. Export values neared US$30 billion last year, a thirty-fold increase from 1988. The United States ended its embargo of Vietnam in 1993 and signed a bilateral trade agreement with Vietnam in 2000. The deal transformed trade relations between the two countries. The US is now Vietnam's largest export market, with textiles, seafood, footwear and wood products ranked among the top earners.

Liberalizing international trade and investment policies required a historic shift in ideology within the ruling Communist Party. Once fearful of international links outside of the Communist bloc, the party has made trade and foreign investment central planks of the country’s economic strategy. And as in China, reformers within the party aim to use international commitments like those encoded in WTO to lock in policy changes.

Embracing globalization was traumatic for the Vietnamese Communist Party, the founding principles of which were based on the Leninist thesis that imperialism and capitalism were one and the same. Watching the imperial powers divvy up China and Southeast Asia, Ho Chi Minh and his fellow revolutionaries decided that the international Communist movement offered the best hopes of realizing their dream of an independent Vietnamese nation-state.

Like most western Marxists at the time, and indeed for many years afterwards, they believed that the development of an indigenous, autonomous capitalism was impossible in the former colonies. Even once formal independence had been achieved, they assumed that indigenous capitalists would remain pawns of the imperial powers intent on draining the wealth and natural resources of developing countries through unequal trade and control over finance capital.

Early Vietnamese nationalists like Phan Boi Chau saw Japan as a model of autonomous Asian capitalism. Japan’s rapid industrialization and victory in the Russo-Japanese war reinforced the idea that Asian countries were doomed to subordinate status in the world order. But Japan’s own imperial ambitions, and its alliance with Vichy France, confirmed for many nationalists that the independence and anti-imperialist struggles were synonymous. France’s ill-advised and ultimately futile attempt to re-establish colonial control of Vietnam after the war and its replacement in the southern half of the country by the Americans during the 1960s reinforced this view.

But history has been unkind to Lenin’s theory of imperialism, not least in Asia. Political independence, it turns out, was not a facade behind which foreign powers maintained economic domination. The nation-state has proven to be an essential building block of economic development. As Liah Greenfeld eloquently shows in her book the Spirit of Capitalism, nationalism has been the origins, not the consequence, of economic development in the modern era.

Japan eventually did emerge as a regional leader, devising new ways to alloy the power of the state to market incentives as a means of accelerating industrialization and growth. Former Japanese colonies Taiwan and South Korea emulated the leader, along with the city-states of Singapore and Hong Kong. A ‘second tier’ of industrializing East Asian countries including Thailand and Malaysia followed in quick succession. China emerged from its Maoist misadventures in the 1980s to develop its own brand of rapid capitalist development under Deng Xiao Ping.

Although the development trajectories of these countries differ in important respects, all have relied heavily on export surpluses to finance investment. They found ways systematically to favor domestic firms to develop local capacity, and they compelled foreign investors to contribute to nationally determined goals such as export growth and technology transfer.

Since 1989, Vietnam's economy has grown faster than any other country in the world except for China and the African oil enclave of Equatorial Guinea. But the speed of globalization’s arrival to Vietnam has created problems as well as opportunities. For the first time in the history of independent Vietnam, severe poverty stands alongside pockets of phenomenal wealth.

Another challenge presented by the incredible speed of Vietnam's integration is the learning curve faced by the nation’s policymakers. Impressed by the huge benefits to be gained through expanded trade and investment ties, they are at times too anxious to make commitments before the long-term implications are well understood. The example of WTO-plus commitments on intellectual property rights that will hamper Vietnam's ability to provide affordable, lifesaving medication to people living with HIV/AIDS is a well-known example.

But the most imposing obstacles to continued success are home grown. In contrast to China, Vietnam's ruling Communist Party is still wary of the accumulation of economic power beyond the control of the state. The party’s new appetite for globalization has not yet brought about full acceptance of domestic capitalism.

Managers of state-owned find influential allies in the military and security apparatus, which see growing economic power in private hands as a threat to the authority of the Communist Party and hence political stability. The party’s preference for a ‘socialist-oriented market economy’ reflects an attempt to resolve the internal tension between the goals of political stability and economic growth. 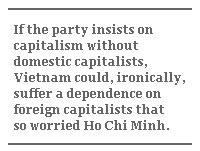 Foreigners in Ha Noi are encouraged by the leadership’s repeated praise for the private sector’s contribution to the national economy. Some expect the party to embrace the private sector more formally at its next Party Congress in 2006. New business laws widen the de jure scope for private activity. But Prime Minister Phan Van Khai made clear in a recent speech that private business means small businesses. The commanding heights of the economy should remain firmly in the state sector.

Despite subsidies and other state favors, most public enterprises have performed poorly even under doi moi. Although state-owned enterprises are common in East Asia, governments have forced them to compete internationally and against technologically and commercially dynamic domestic conglomerates. It remains to be seen whether Vietnam can move up from raw materials and garments to more sophisticated exports without having home-grown equivalents of Mitsubishi, Samsung or Acer.

Foreign companies can help fill the gap left by the missing large domestic private firms. But one of the great lessons from East Asia, in contrast to Latin America, is that national ownership and capabilities do matter. If the party insists on capitalism without domestic capitalists, Vietnam could, ironically, suffer a dependence on foreign capitalists that so worried Ho Chi Minh.