Walking on Eggshells in Tehran

Iran's nuclear ambitions have once again returned to the headlines. Just days after the Mideast nation entered an agreement with the European trio – France, Germany, and the UK – US officials made allegations about Iran's continued weapons development. As those accusations remain unsubstantiated, writes nonproliferation expert George Perkovich, the focus of international attention should remain on Iran's deal with Europe. Indeed, facilitating this relationship will be complicated, due to the deep-seated distrust simmering among all involved parties – and the US presence in Iraq further complicates matters. The most effective route to securing a deal, suggests Perkovich, may have to entail UN Security Council involvement: "This would raise the incentives of all parties to fulfill its terms." – YaleGlobal

Walking on Eggshells in Tehran

Given the depth of mutual distrust, the US and Europe must work hard with Iran to prevent a nuclear breakout
George Perkovich
Monday, November 22, 2004 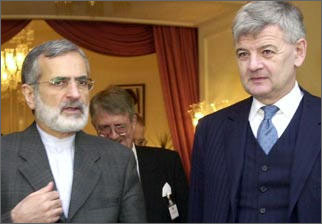 WASHINGTON: Much of the world breathed a sigh of relief when Iran and three European Union countries recently agreed on a course to resolve the boiling crisis over Iran's nuclear activities. With Iran agreeing to suspend those activities as long as progress is made in structuring a longer-term cooperative relationship with Europe, the nuclear issue shifted to the backburner. But the relief was cut short by the US claim of new evidence that Iran is violating its commitment not to pursue nuclear weapons.

To be sure, US Secretary of State Colin Powell's suggestion that Iran might be adapting a missile system to carry a nuclear warhead has grave implications. If true, these allegations, paired with International Atomic Energy Agency (IAEA) evidence of Iran's illicit acquisition of nuclear material and technology, would prove that Iran is violating its Nuclear Nonproliferation Treaty commitment to develop nuclear technology solely for peaceful purposes. The Iranian nuclear issue would then almost have to be sent to the UN Security Council for enforcement action – a move that would expose rifts among the major powers, as well as the international system's relative fecklessness in dealing with the threat to international peace and security posed by proliferation.

But as long as the Powell allegation remains unsubstantiated, the deal between the three European nations (Germany, France, and the UK) should remain the center of international attention. The true challenge, then, is to persuade Iran to set aside its nuclear weapons ambition and build a constructive relationship with Europe amidst so much distrust. Understanding the nature of this distrust, which emanates from all sides and is likely to persist for many years, is crucial to improving the relationship-construction project.

First, the European three do not trust Iran's claims that it does not seek nuclear weapons. Nor do they believe that the enigmatic and faction-ridden Iranian leadership has irrevocably decided not to pursue the technical and material option to build nuclear weapons.

At the same time, the European trio do not trust that a Bush administration guided by Vice President Cheney and Undersecretary of State John Bolton will refrain from sabotaging a negotiated settlement with an "evil" Iranian government. European leaders bristle that while Washington lacks realistic military options to destroy Iran's nuclear infrastructure or change its government, the administration still refuses to deal with the crucial officials in Tehran who must make the decisions to abandon acquisition of nuclear weapons.

Iranian leaders, meanwhile, do not trust each other, the Europeans, or the Americans. Individuals and factions in the leadership are jockeying for position in the lead-up to 2005 presidential elections. Some favor Iran's integration into the mainstream global political economy, while others, including conservative trading groups linked to religious leaders' foundations, fear economic openness and competition. The nuclear issue is intrinsically important, but it also has become the political football of Iranian politics. Whoever is making decisions on this issue now in Tehran is acting tactically, watching each minute of the game before deciding on next steps. No fundamental strategic goal has been decided.

Iranians also worry that the United States could hinder delivery of benefits promised by the Europeans and would still seek regime change notwithstanding the EU position. Without explicit US endorsement, Iran will not implement a final deal negotiated by the Europeans. However, national pride and political temerity will prevent Iranian officials from explicitly calling for this endorsement; Washington and the Europeans must initiate it.

US officials, obviously, do not trust Iranian leaders to abandon nuclear weapons acquisition efforts. Washington has little confidence in the IAEA's resolve or capacity to dig to the bottom of Iranian nuclear activities and uncompromisingly investigate all leads. Key US leaders believe that Iran will continue to seek the bomb, either by bending nonproliferation rules or other clandestine means.

Further, Washington does not trust the Europeans to be tough enough to insist on a final position that keeps Iran from producing highly enriched uranium and separated plutonium. Key US officials lambaste the European failure to recognize that threats of political isolation, economic sanction, and possible use of force are necessary to compel Iran to make the right strategic decision.

Vice President Cheney, Undersecretary of State Bolton, and other powerful administration players still believe in the revolutionary approach to nuclear counterproliferation, as first applied in Iraq. They believe that nuclear weapons per se are not the proliferation problem: The major obstacles are the "bad guys" who possess those weapons. Thus, the US strategy is to remove bad guys – the "axis of evil" – and their weapons, while preserving the nuclear-arms-bearing rights of the good guys. Unfortunately, the administration fails to address how its own military posture in the region – as well as Israeli and Pakistani nuclear-weapons capabilities – affect Iranian interests.

This selective, moralistic, and militant US posture exacerbates Iranian nationalism, elevating both Iranian insecurity and defiance. It also undermines the cooperation of the Europeans, the IAEA Board of Governors, and the UN Security Council in order to isolate and pressure Iran. Rather than isolating Iran, the Bush Administration has isolated itself … barring, of course, the revelation of a smoking gun that so compellingly proves Iran's nuclear weapon intentions, that the rest of the world cannot avoid taking the tougher enforcement line favored by Washington.

Ironically, the United States, though a non-party to negotiations, can determine their pace. If Washington explicitly backed the terms of the November 15 deal and conveyed its willingness to deal with whoever leads the Iranian government, the whole process of testing and proving the viability of the deal would be accelerated. Even as it tries to solve problems with the current leadership in Tehran the US should continue to express its support of Iranians who want elected representatives, rather than the unelected religious leaders, to gain all relevant levers of power in Iran.

Iraq has emerged as an additional complicating factor. Iran's deepest security interest in nuclear weapons originated with the 1980-88 war initiated by Iraq. Now, the US presence in Iraq threatens Iran, and, ironically, also gives Iran potential leverage over Washington. Iran can make the lives of US personnel in Iraq much more difficult if it feels the need to further deter a US intervention in Iran. Conversely, the stability of Iraq and Iran, and the long-term interests of the United States depend on effecting a security system for the Gulf region. To this end, the US must participate constructively in a broader regional security dialogue with Iran on the future of Iraq and Persian Gulf security.

Ultimately, the broad stakes involved in this complicated set of issues may warrant UN Security Council endorsement of any deal finally negotiated. Iran will worry that the United States will try to undermine Russia's or other states' provisions of nuclear reactor fuel to Iran, or will impose secondary sanctions on Europeans trading with Iran. The United States, the EU, and others will worry that Iran will renege on the deal and count on friends in the Security Council to block punishment. All of this suggests that any deal finally negotiated between the three European nations and Iran should be recorded, commended, and, in effect, backed by a positive UN Security Council resolution. This would raise the incentives of all parties to fulfill its terms.

George Perkovich is vice president for studies at the Carnegie Endowment of International Peace, and co-author of Universal Compliance: A Strategy for Nuclear Security.