Wanted: A Roadmap for North Korea

With North Korea hinting at the possibility of a return to six-party talks amidst speculation about its testing a nuclear device, the long-simmering issue of non-proliferation is back in the limelight. On June 10, South Korean President Roh Moo-hyun arrives in Washington to discuss a possible solution to the crisis. While Pyongyang prefers bilateral talks, the US has insisted on the six-party format. As Michael O'Hanlon writes, this haggling detracts from more important matters: "The issue is not where or how to meet." Rather, Washington must define a more substantive agenda for negotiations. O'Hanlon underscores the need to extend the conversation beyond the current nuclear-only approach, which has proved ineffective thus far. A broader roadmap for political and economic normalization, including other incentives – aid in developing infrastructure, energy assistance – would allow the US to "up the ante": A more attractive offer for North Korea would allow negotiators to increase their demands. And, should Kim Jong-il refuse the more generous package, Washington would be better positioned to pursue a hard-line approach. – YaleGlobal

Wanted: A Roadmap for North Korea 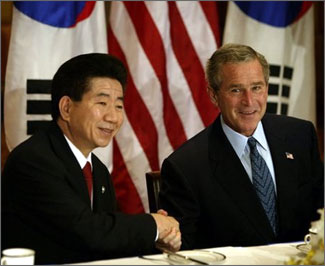 Nice to meet you: Presidents Bush and Roh in Bangkok in 2003. Now they have to find a road map out of the North Korean crisis. (Photo: White House)

WASHINGTON: With South Korean President Roh Moo-hyun arriving for a June 10 consultation with President Bush amidst a growing crisis over North Korean nuclear ambition, it is time for a fundamentally fresh approach. As North Korea indicates a tentative, lukewarm interest in returning to negotiations over its nuclear weapons program, one thing is clear: Washington's approach has not been working.

President Bush's hard-line policy, in which he has demanded North Korean denuclearization before anything else, has coincided with a quadrupling of the estimated North Korean nuclear arsenal over the last three years. President Clinton's earlier policy of engagement did help cap the North Korean nuclear arsenal for years. But Pyongyang invalidated that approach when, starting around 1998, it began to cheat on its 1994 treaty commitments and developed a uranium enrichment program for nuclear weapons purposes. Both approaches have effectively been invalidated, or at least rendered obsolete, by their track records.

Much of the conversation in the United States now concerns whether to commit only to six-party talks – involving the two Koreas as well as Russia, China, and Japan – or complement them with bilateral negotiations between Pyongyang and Washington. But this debate is not particularly productive. It begs the question of what one should discuss after negotiations begin, and what type of basic strategy the United States should bring to the table.

Some proponents of bilateral talks, it often seems, argue that if the United States were to grant North Korea the respect of direct high-level contact, their legitimate interests might be addressed and the crisis resolved. But this ignores the fact that Stalinists don't tend to be reasonable no matter how you approach them – unless you propose a policy that, for one reason or another, they can't refuse. Proponents of bilateral talks also seem to forget that North Korea began to cheat on its nuclear obligations when the Clinton administration was attempting a policy of concerted, bilateral contact, going so far as to send Secretary of State Albright to Pyongyang. Many in this camp would also offer North Korea even more aid than did the US and its partners in the Agreed Framework in 1994. Alas, this would seem to reward Pyongyang's extortionate behavior. Perhaps even worse, it would fail to address the underlying fact that as long as North Korea's economy is in fundamental disrepair, Pyongyang will be tempted to create future crises to extract resources from the international community – especially after setting the precedent that doing so produces results.

On the other hand, strident advocates of Bush's six-party format sometimes seem to suggest that any wavering from that approach would be tantamount to appeasement. But this view ignores the fact that the United States has had plenty of direct contacts with extremely unsavory regimes before, and that nothing about such bilateral meetings has prevented Washington from delivering very blunt, principled, resolute messages. Moreover, proponents must recognize that the theoretical reason for creating the six-party talks has not translated into practical results. Rather than allowing South Korea, China, Japan, Russia, and the United States to deliver a united message to Kim Jong-il about the need for him to denuclearize, it has led to a split among the five. China and South Korea do not believe Washington is being nearly flexible enough in the talks. They are unwilling to consider UN Security Council sanctions or other coercive approaches, as they partially blame the United States for the failure of the negotiations to date.

The issue is not where or how to meet. Although my Brookings colleague and former US negotiator with North Korea, Jack Pritchard, has convinced me that bilateral talks can usefully supplement the multilateral framework, this is a secondary point. The real crux of the matter is defining a substantive agenda that would stand the maximum chance of success – and best position the United States to get tough with North Korea should the talks fail.

The US must broaden its negotiating strategy. Focusing on the nuclear issue alone may seem sensible because it aims squarely at what threatens American security the most. It may also seem principled because it requires North Korea to make a fundamental choice about whether to honor its international obligations before anything else – aid and trade benefits, for instance – can be discussed.

But this nuclear-only approach has failed. And in fact, it will almost surely continue to fail. The US has not offered North Korea enough real incentives to cede what is effectively its one national resource. Nor has the US sufficiently threatened the North Koreans to turn around their behavior through intimidation. When you negotiate with no carrots and no sticks, your prospects for success are poor.

Since there is no solution to this dilemma on the narrow terms of the nuclear issue, the only way out of this diplomatic impasse is to change the nature of the problem – and in particular, to broaden it. The US should indeed offer North Korea more, but only if it is prepared to do much more than denuclearize. A proposal that casts the nuclear issue as one plank of a broader reform and normalization agenda will allow negotiators to dangle many more carrots in Kim Jong-il's face without being vulnerable to a charge of appeasement, and without encouraging a dangerous form of behavior that would set a horrible precedent in the Korean context and beyond.

To put it differently, the United States should test North Korea's willingness to begin economic and broader societal reform, Vietnam-style. If Pyongyang proved willing to do so, the United States could support a US-North Korea roadmap similar to that which facilitated US-Vietnam normalization (in political as well as economic and other spheres). The United States and its allies could help – by helping North Korea improve its ports and roads, providing more donations of fertilizer and agricultural equipment, offering greater energy assistance, and gradually lifting US trade sanctions. Japan, the World Bank, and the IMF would likely offer much more development assistance if the US chose this path itself. But the price for such generosity would be steep. In addition to denuclearizing over a period of several years, North Korea would also have to give up chemical weapons and long-range missiles, cut its conventional military substantially to reduce its enormous drain on the economy (as well as the threat it poses to Seoul), begin a dialogue with the Red Cross about human rights conditions in its prisons, and allow Japanese kidnapping victims to go home.

Not all of this would have to happen immediately. Not all would have to be codified in detail in a treaty. But without a broader framework, the US will be back in the same old dead-end negotiation about nuclear weapons that could easily make it a Pyrrhic victory to get North Korea back to the bargaining table. And if such a US plan is rejected by North Korea – out of fear of reform or simple spite at the international community – Washington would then be in a much stronger position to argue to the other six-party participants that whatever their initial druthers, the time for more coercive measures had finally come.

Michael O’Hanlon is a senior fellow at the Brookings Institution and coauthor, with Mike Mochizuki, of Crisis on the Korean Peninsula: How to Deal with a Nuclear North Korea.