The War on Terror in Southeast Asia Could Hurt Civil Liberties

The war on terror in Southeast Asia has a quickened tempo in the wake of the discovery of a bombing plot in Singapore and the Bali bomb attacks killing nearly 200 people. These heightened anti-terrorist measures come just as countries like Indonesia and the Philippines are emerging from years of despotic rule. According to some observers, already there are worrisome signals that the new commitment to security is serving as a political veil to cover the persecution of opposition groups. In a recent interview Singapore's senior statesman Lee Kuan Yew said that terrorist threats could not be contained by following normal legal procedures. "Suppose we had to produce these terrorists in court within 48 hours to charge them and have their lawyers fight for bail, could we have broken them up before they let off the truck bombs? We had them arrested and detained without trial to stop them from committing mischief," Lee said in an interview with the Far Eastern Economic Review. But given the region's history, any wider use of preventive detention could be a slippery slope back to the past. - YaleGlobal

The War on Terror in Southeast Asia Could Hurt Civil Liberties

The war on terror is expanding in Southeast Asia, but the cost to civil liberties may be rising, too
Sidney Jones
Friday, December 6, 2002 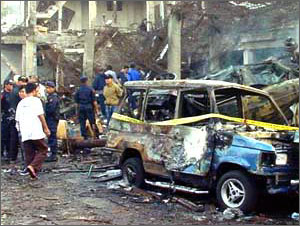 The Site of the Terrorist Bombing in Bali

The war on terror is well underway in Southeast Asia, and many civil society leaders are nervous. Over the last two decades, the Philippines, Thailand, and Indonesia have removed authoritarian leaders, curbed the power of politicised militaries, and expanded civil liberties. Those gains cannot be easily reversed, but they can be eroded, and there is concern that the war on terror will do just that.

On November 3, in the wake of the Bali bombing killing nearly 200 people most of them tourists, the Association of Southeast Asian Nations (ASEAN) issued a Declaration on Terrorism, saying, "We resolve to intensify our efforts, collectively and individually, to prevent, counter, and suppress the activities of terrorist groups in the region." The ASEAN governments commended Indonesia and the Philippines for their determination to step up their efforts to fight terror. Just before the ASEAN summit, Malaysia announced that it would host the ASEAN Regional Training Centre for Counter Terrorism, the precise function of which is not yet clear. Governments in the region are making political, legal, and institutional commitments to fighting terror, but many nongovernmental leaders remain concerned that terrorism is a poorly defined act, and anti-terrorism initiatives can be used to serve other political agendas.

Human rights organizations, in particular, from Imparsial in Indonesia to SUARAM in Malaysia, have been concerned since September 11, 2001 that the war on terror would bring restrictions on hard-won civil liberties. To date, no government in the region has been as indifferent to international human rights standards in its pursuit of anti-terror goals as the United States. No government in the region has had Washington's inclination to round up suspects for minor immigration infractions or subject young men to lengthy interviews by internal security officials because of their national origin or Islamic background, and none, fortunately, has had the capacity to establish a Guantanamo-like detention center where no national laws apply.

But Southeast Asians are right to feel uneasy. Their concerns, based on experience of recent past, include:

1. That new anti-terrorism measures will lead to arbitrary detention

2. That militaries will be strengthened at the expense of civilian institutions

3. That protection of the rights of migrants and asylum-seekers will be undermined

In all of these areas the fears are more for what could happen than for what has already taken place. In countries making the transition from authoritarian rule, the notion of giving more powers to security forces is anathema.

Indonesian and Malaysian human rights activists are perhaps the most worried on this count. Many Indonesians worry that a new anti-terrorism "decree in lieu of legislation" adopted last month will permit sweeping arrests of politically radical but non-violent Muslims or of supporters of independence in Aceh and Papua. The decree is considerably less draconian than the Internal Security Act in Malaysia or Singapore. Nevertheless, Indonesia has a troubled history of using broadly-worded legislation to go after what an army officer once referred to as "the extreme left, the extreme right, and the extreme center" - or respectively Communists, radical Muslims, and NGOs. (Many NGOs are seen as anti-government troublemakers, even if they have no obvious political ideology.) Given the openness of post-Soeharto Indonesia, a massive witch-hunt against any of these groups is probably not possible, especially given the domestic political costs involved. (In its cautious response to international pressure to fight terror, the Megawati government has not forgotten that it faces direct presidential elections in 2004.)

At the same time, the new decree allows looser rules of evidence than does the Indonesian Criminal Code, including the use of intelligence reports as a basis for arrests. While those reports have to be reviewed by a judge, the Indonesian court system is so weak and corrupt that judicial review hardly constitutes a meaningful safeguard. If, as many fear, military operations are stepped up in Aceh, many civilians could be detained for up to six months under the new decree on suspicion of supporting terror.

In Malaysia, where Prime Minister Mahathir has used the Internal Security Act against political opponents, there is concern that the war on terror has given the government new justification for a law that many reformers had hoped to see abolished. Malaysian officials, who had been the target of frequent human rights criticism before 9/11 and are now being praised by Washington and others, are decidedly in an "I told you so" mood thereafter - and are now arguing for strengthening the law to prevent any judicial review whatsoever.

There is no question that the Malaysian and Singaporean arrests of suspects in mid-2001 and early 2002 proved valuable, especially given the nature of regional links among radical Muslims committed to violence that have subsequently come to light. But elsewhere in the world - Egypt is one example - indefinite detention and denial of rights of suspects have served to further radicalise extremist groups, and prisoners can come out more determined to wreak vengeance on their enemies than they were when they went in.

Brutality and injustice can also undermine the fight against terrorism. In the bombings that Jemaah Islamiyah carried out across Indonesia on Christmas Eve 2000, one group of men arrested in North Sumatra were badly tortured and confessed to whatever the police wanted. The police assumed that Acehnese rebels were responsible for the bombings, got confessions to this effect through torture, and probed no further.

No one questions the need for accurate intelligence and the need to take measures to prevent acts of terror. The problem is when extraordinary powers are given to institutions with a history of abuse in the past. Unless security agencies in governments undergoing democratic transition are fully under civilian control and their operations fully transparent, the danger remains that measures designed to fight terrorists can be used against other perceived enemies - including political opponents.

Not unrelated to the fear of arbitrary detention is the fear that civilian police will lose out to military and specialized intelligence agencies as the war on terror is fought. The most visible manifestation of this was the U.S. troop presence in the southern Philippines, "training" combat troops to fight against the Abu Sayyaf group in Mindanao. The greatest concern about upsetting the delicate civilian-military balance, however, comes from Indonesia, where the police and military are engaged in a battle for turf, resources, and influence so intense that it frequently turns deadly. In Binjai, North Sumatra, an army attack on a police post in late September left ten dead.

The Indonesian police are unquestionably poorly trained, deeply corrupt, and intensely disliked by the public in general. But if Indonesians want civilians to be in charge of internal security, there is no choice other than to build up the police and keep nudging the military toward external defense, a process that has been taking place, if at a glacial pace, for the last three years. The war on terror runs the risk of reversing that trend. In the Bali investigation, for example, the police are the public face, but much of the work appears to be that of the National Intelligence Agency, a body that is a military-civilian hybrid. Senior military officers are talking about the need to restructure intelligence gathering in a way that would give a major role to the regional military commands - and strengthen their role in internal security.

The U.S. and Australian governments are seeking to re-engage the Indonesian military in various ways to help combat. The Bush administration is seeking to reopen officer training programs, suspended since 1992, and on November 10, Australian Defense Minister Robert Hill openly advocated restoring ties with the army special forces, Kopassus - the same unit whose soldiers have been implicated in two major attacks on civilians in Papua.

The danger is that in the rush to find allies in this murkiest of wars, the international community may ease the pressure on the Indonesian military to reform: to end criminal activities, open accounting books to scrutiny to show how some 70 percent of extra-budgetary revenues are generated , enforce discipline among its extortion-prone and occasionally trigger happy rank-and-file, end the territorial structure that gives it a role in local governance, and facilitate, not obstruct, efforts to investigate human rights abuses.

One issue that has received little attention outside the region is the impact of the war on terror on migrant workers. In July, the world saw a humanitarian disaster unfold as Malaysia cracked down on undocumented migrants, most of them Indonesian and Filipino. Malaysia relies on foreign labor in the plantation, construction, and service sectors to fuel its economy, and like the U.S. and many other labor-receiving countries, it periodically opens and shuts its borders. This time, the crackdown may have been related in part to a well-founded fear of radical Muslim groups from the Philippines and Indonesia using Malaysia as a base of activities .A new amendment to the immigration law, passed in March 2002, increased penalties for undocumented workers, including caning and imprisonment, but gave the migrants an amnesty from prosecution until August 1, so they could return home and get proper papers.

In the disaster that followed, hundreds of thousands of people returned to Indonesia with virtually no preparations having been made at transit points to house or feed them, let alone prepare the necessary documents. Dozens died avoidable deaths in the resulting squalor, and extortion of desperate migrants by unscrupulous officials was rampant.

Preventing infiltration by Muslim extremists was not the only reason for Malaysia's crackdown, but it suggests that the war on terror has the potential to affect the well-being not just of political activists who may get caught up in security sweeps, but of a much larger population.

s safeguards against terrorism, it should understand that draconian measures serve the interests of radicals, not moderates. In the long run, ending corruption and strengthening the courts are better weapons in this war than sweeping anti-terror decrees.

Sidney Jones is the Indonesia Project Director of the International Crisis Group.

Copyright © 2002 Yale Center for the Study of Globalization