Is Water the Next Oil?

Water is more vital for human life than oil – and environmentalists, corporations, communities and governments increasingly recognize its unequal distribution around the globe could lead to severe environmental degradation and intense conflicts in the years ahead. Anyone who cares about water should observe the management of oil during the past century and not repeat the mistakes, argues Rohini Nilekani. Less than 3 percent of the world’s water is potable – and climate change is already rapidly diminishing the vast stores of freshwater stored in glaciers and polar ice. Nilekani, who founded and chairs a non-governmental organization focused on creating a safe and sustainable global water supply, suggests that individual awareness combined with some global leadership must focus on sustaining life on the planet rather than modern lifestyles – and could reduce waste, overpopulation and unsustainable practices. Otherwise, warns Nilekani, the conflicts over water will make the oil crisis “seem like the trailer of some horrible disaster movie.” With water already in short supply for more than 20 percent of the world’s people, no person can afford to take freshwater for granted. – YaleGlobal

Is Water the Next Oil? 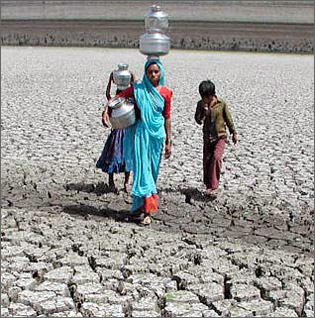 In search of water: Indian women's daily routine in much of the rural areas.

Only 2.5 percent of water of the planet is usable

BANGALORE: Is water the next oil? Motives behind the question vary, depending on who asks the question.

Those who see water as a future core commodity – therefore as profitable a prospect as oil – pose the question to create the right market conditions for water trade. Those who see the potential for conflict arising from scarcity compare diminishing freshwater to oil’s depleting reserves. Those who see an environmental threat from mismanagement of water see parallels with the abuse and waste of oil.

So there are lessons to be learned from how we have managed oil on this planet over the past century and more.

The oil crisis confronting the world today is much like the looming crisis in water, with depleting supplies, unequal distribution and access, and the inevitable specter of rising costs and increasing conflict around the sharing of this vital natural resource. As with oil, water exploitation raises an inter-generational debt that will be hard to repay. The uncontrolled and rapacious exploitation of oil has led to unintended consequences, and if we continue on a similar trajectory with water, the oil crisis will seem like the trailer of some horrible disaster movie.

Ironically, our untrammeled use of oil fuels the crisis in water. Burning of fossil fuels has led to global warming, the melting of glaciers and ice caps, and the early snowmelts that will cause flooding in areas that can hardly bear another burden. And it may also cause the climate to fluctuate in a way that brings too much rain in some places and too little in others.

In addition, the move to replace oil with biomass-based fuels will intensify water use, not so much for sustaining our life and this planet as to sustain our lifestyles. 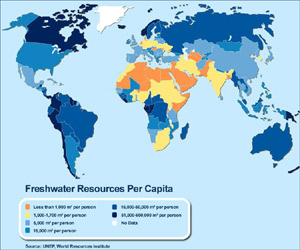 The challenges are immense. The first, of course, is that the earth has a finite amount of usable water, despite it being a beautiful blue planet. The 2.5 percent of usable planet water is in a precarious balance with glaciers and fossil groundwater remaining intact.

Another challenge is the inefficiencies and inequities in how water is used. Agriculture consumes 70 percent of the world’s water, much of it to produce what we eat. There is tremendous wastage in our agricultural processes, though the levels are somewhat stable or even improving slightly.

Demand for domestic water has risen sharply over the century, which again brings us back to questioning what we as individuals can do. The sectoral demand on water is increasing rapidly within both industry and domestic settings. Competing demand will create pressure on the agriculture sector, perhaps leading water-scarce regions to produce less food and outsource food production to water-rich countries, spurring concerns about the food security of individual nation states.

Poverty, power and inequality are at the core of the water issue and not scarcity, as the UN Development Programme Human Development Report 2006 powerfully argues.

And herein lies the rub. Since we have taken water for granted, we must face the alarming inequality in safe water. More than 1.5 billion people lack access to adequate water and sanitation. If poverty is bad, then poverty without water is hell on earth. Recently, the millennium development goals have supplied a normative framework for governments to prioritize how water is delivered. Still, not enough money or resources flow into this sector. Worldwide, only 5 percent of all international aid goes into water and sanitation. We are still far from universal access to good water for life. And this inequity instigates the raging debate around water today.

Another critical problem for the water sector is wastewater and pollution of our ponds, streams, lakes and rivers. No one can estimate the costs to clean our water resources and how much of the damage is irreversible.

So maybe it is time to apply the lessons learned from the management of another natural resource – oil.

It’s safe to say that, with oil, among other mistakes, we have seen overuse; gross inequity in benefit sharing, across both geography and time, of what is essentially a common property; poor environmental management; an overarching supply-side focus; the use of technology to speed unsustainable extraction; and the lack of effective global governance.

For water, therefore, we need to focus on demand management and universal access, affordable pricing, pollution control and source sustainability. We need to use technology not to extract water more efficiently from the bowels of the earth, but to replace the use of water with other means where we can, especially to reverse our use of freshwater to carry human waste. And we need urgently to set up more appropriate platforms for negotiation and regulation that are truly participatory across the globe.

These steps are much easier written about than done. So where should one begin?

Already some work is underway to restore good practices or generate new ones: One example is that of reversing the practice of using water to flush and carry human waste. European cities such as Oslo have introduced vacuum-flush toilet systems that use little or no water. Gaining ground in South Asia is eco-sanitation, which provides a viable alternative to water-borne sewage and also converts human waste into nutrient-rich fertilizer.

For source sustainability, New York City has made a creative breakthrough by supporting the preservation of forests in the watersheds of the Catskill Mountains, after finding it more cost-effective to preserve the watersheds that supply the metro’s drinking water than to build costly treatment and source-augmentation plants.

Demand management is perhaps the trickiest issue of all. How do we convince ourselves to use much less water?

Perhaps the urban consumer is the key to solving some of the problems. Urbanites are removed from the natural world, and urban demand fuels new and unsustainable uses of water. And yet, the urbanite is arguably more integrated with the global economy and increasingly understands its pitfalls. If there is to be a change in human consciousness, the urban mind is fertile ground.

We must focus quickly on making the invisible visible. Much of our incompetence stems from a lack of awareness. We need to reduce the knowledge gaps if water consumers are to make more virtuous choices about products and lifestyles that abuse water.

But if such inquiry is to deliver creative solutions, then people must internalize the locus of control. They must see themselves as not only part of the problem but also part of the solution. As a Chinese proverb says, “Tell me, I forget. Show me, I remember. Involve me, I understand.”

Among the most important lessons to be taken from the history of oil is not taking essentials for granted. Conserve oil, but also conserve water. If our Hummers are a red flag in oil, maybe our Jacuzzis are the same for water. A new universal water ethic could eliminate our lethal bottleneck of overpopulation and wasteful consumption.

Can the water crisis be prevented from becoming a catastrophe? Can we all change the way we think of water? Now that we know every drop counts, can we count every drop? We will soon find out. And it will be bitter irony if our freshwater reserves are depleted before our oil wells have run dry.

Rohini Nilekani is chairperson of Arghyam, a charitable foundation that supports a safe and sustainable global water supply.