Waziristan or Bust: Pakistan Army in Fight for the State’s Survival

Pakistan’s slow descent into chaos that author and journalist Ahmed Rashid has chronicled over the past years has reached a critical juncture with this week’s army offensive against the Pakistani Taliban base in South Waziristan. The latest offensive coming on the wake of audacious terrorist attacks is only a tip of the iceberg. As Rashid deftly shows in this essay, the complexity of the situation stems from the tortuous relationships of the major players in Pakistan. The Pakistan army is finally launching an offensive against the Pakistani Taliban only after a spate of suicide attacks and an embarrassing siege of the army headquarters. But the military is not attacking old foes with whom they have been engaged for years. Many of the militants have connections with, or received training from, the army and the Interservices Intelligence, Pakistan’s all-powerful spy agency. Moreover, the head of the government in Punjab, where many suicide attacks occurred, has connections with the head of the militant group Lashkar-e-Taiba, which was responsible for the Mumbai massacre in 2008. Meanwhile, Islamabad is practically bankrupt. But the military excoriates the civilian government for accepting loans from the US because of the conditions giving the civilians control over the military. The army is dubious about the long-term commitment of the US in Afghanistan, giving them additional reasons to maintain ties with the Afghanistan Taliban. But there are many larger players just as worried about the fate of Afghanistan against whom Pakistan might bump heads. Ideally, as Rashid relates, the civilian government, the military, and the opposition need to resolve their differences and fight extremism. Until that happens, Pakistan will likely remain the sick man of South Asia. – YaleGlobal

Waziristan or Bust: Pakistan Army in Fight for the State’s Survival

The Pakistani military has been sleeping with the enemy while keeping the civilian government down
Ahmed Rashid
Monday, October 19, 2009

MADRID: After nine suicide attacks in just eleven days that killed 160 people, including many from the security forces, the Pakistan army has finally started its long awaited offensive in South Waziristan where the Pakistani Taliban are based. The success of the offensive, against the backdrop of a serious civil-military division in Pakistan and unresolved debate in Washington, could be critical for the fate of Pakistan which is financially broke and politically paralyzed.

The army and the civilian government are once more at odds over policy towards the US and India, the insurgency in Baluchistan, and how to deal with militant Punjabi groups who are linked to the Taliban. Moreover, still unresolved and now an issue of growing international concern, is the sanctuary being given to Afghan Taliban in Pakistan. 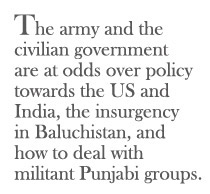 Dozens of soldiers and police officers have been killed in suicide attacks from October 5 to 15 that included an embarrassing 22 hour siege of the army headquarters in Rawalpindi and the deaths of eight soldiers and three simultaneous attacks on police training camps and intelligence offices in Lahore. The spate of attacks could have been designed to prevent or delay the expected army offensive on its stronghold, but they also aimed to topple the government, impose an Islamic state, and, if possible, get hold of Pakistan’s nuclear weapons.

The recent attacks have proved more deadly than those in the past because they took place in three of the country’s four provinces, involving not just Taliban tribesmen from the Pashtun ethnic group, but extremist Punjabi and Kashmiri factions who were until recently trained by the Interservices Intelligence (ISI) to fight Indian forces in Indian Kashmir.

Moreover, several within the militant leadership had direct connections to the army or the ISI. The so called Dr Usman, the leader of the nine man group that attacked the army’s general headquarters on October 10, was himself a member of the army’s medical corps. Police officials say that the Rawalpindi and Lahore attacks had help from inside because the terrorists were able to bypass the stringent security measures in place and had knowledge of the layout of the complexes. 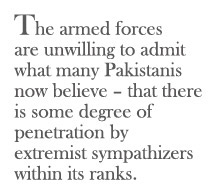 While the armed forces are unwilling to admit what many Pakistanis now believe – that there is some degree of penetration by extremist sympathizers within its ranks – the civilian government refuses to admit that the largest province of Punjab and especially its poverty hit southern part has become the major new recruiting ground for militants.

The Punjab provincial government is run by Shabaz Sharif, the brother of Nawaz Sharif and leader of the opposition in the country. The Sharif brothers who ruled the country twice in the 1990s are known to have close ties with the leaders of several militant groups, including Hafez Saeed, the leader of the Lashkar-e-Taiba whose militants carried out the massacre in Mumbai India last year.

Saeed, wanted by India and Interpol has been freed twice from jail in Punjab, on account of lack of evidence to hold him. The Sharifs have refused repeated requests by the Americans, British, Indians and the federal government to crack down on militancy in south Punjab where it is strong and providing recruits for the Taliban. 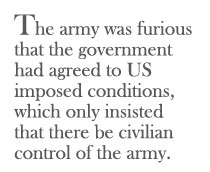 Meanwhile the federal government has suffered increasingly fraught relations with the army. Last week at the height of the suicide attacks, the army chief General Ashfaq Pervaiz Kayani chose that moment to blast the civilian government for agreeing to a US $ 7.5 billion five year aid package from the US for civilian and developmental purposes.

The army was furious that the government had agreed to US imposed conditions, which only insisted that there be civilian control of the army, democracy be maintained and the fight against extremism continued. The army with its deep tentacles in the Pakistani media and among opposition politicians, whipped up a storm of public opinion against the deal, with some commentators accusing the government of President Asif Ali Zardari of treason.

Neither the army nor the politicians seemed to notice that the country is nearly bankrupt, barely subsisting on life support loans from the International Monetary Fund worth a total of US$11.3 billion. Pakistan has been holding out a begging bowl for the past year, while factories, farms and schools are shutting down because of a chronic shortage of electric power, which is off in major cities for up to 10 hours a day.

The civilian government has also tried repeatedly to end the long running separatist insurgency in Baluchistan province by declaring ceasefires and the promise to hold talks with insurgent leaders. However Baluch leaders accuse the army of sabotaging any such political reconciliation by continuing to assassinate or carry out forced disappearances of Baluch activists.

Meanwhile as the policy review over Afghanistan and Pakistan continues in the White House, both the army and government are being directly accused by US officials of continuing to harbor the Afghan Taliban leadership and allowing them to pump in recruits, logistics and other supplies into Afghanistan. 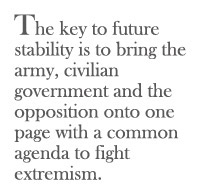 As long as only British and Canadian troops in Helmand and Kandahar faced the effects of the Taliban’s safe sanctuaries in Pakistan’s Baluchistan province, the former Bush administration was quiet. But now that there are over 10,000 US marines in Helmand and Kandahar who are taking casualties, the Obama administration has made the sanctuary issue a major plank in its future relations with Pakistan.

But the dithering in Washington over the future of US policy towards Afghanistan is leading to greater justification by Pakistan and other neighbors of Afghanistan to hedge their bets for the future in case the Americans withdraw or reduce their commitment, by backing once again their favorite Afghan proxies just as they did during the 1990s civil war.

Pakistan has been saving the Afghan Taliban leadership for just such an eventuality. But now Iran, Russia, India and the Central Asian states are all looking at their future in the country in the light of a US lack of resolve to stay the course in Afghanistan. US relations with Pakistan’s military remain troubled – everyone knows that it is still the army and not the civilian government that calls the shots when it comes to policy towards India and Afghanistan.

However it is the worsening relations between the civilians and the military over domestic issues that are causing growing consternation at home. It is unlikely that General Kayani would like to overthrow the civilian government, but the army is resisting any attempt by the civilians to change the broad ambit of foreign or domestic policy.

Zardari is known to want peace and trade with India, an end to interference in Afghanistan, improved ties with Iran and better relations and more aid from the West to strengthen the economy and democracy.

However, Zardari’s attempts to build up public support for these logical civil demands have been stymied because of public disillusionment with the civilian government, which is considered to be corrupt, ineffective, incompetent and unwilling to rebuild moribund institutions of governance.

The key to future stability is to bring the army, civilian government and the opposition onto one page with a common agenda to fight extremism, while amicably resolving other internal disputes, but so far that looks extremely unlikely.

Ahmed Rashid is a Pakistani journalist and author, most recently of “Descent into Chaos: The US and the Disaster in Pakistan, Afghanistan and Central Asia.” Click here for the excerpt.