Weapons of Mass Destruction and the Media: Anatomy of a Failure

After the September 11 terrorist attacks, President George W. Bush and Secretary of Defense Donald Rumsfeld made the decision to present terrorism, weapons of mass destruction and Iraq as a linked triple threat. Susan Moeller, professor of media and international affairs at the University of Maryland, argues that in the “stultifying patriotic climate” that followed the attacks, most mainstream print media in the United States failed to point out that this linkage reflected a political choice made by the Bush administration. Instead, most reporters regurgitated the government's news briefings while burying dissenting voices deep within the articles. Although Moeller points to a few prominent journalists who took a more skeptical approach and sought other sources of information, most mainstream American media overlooked certain facts while conflating others. For instance, no attempt was made to differentiate between nuclear energy and nuclear weapons programs, or between having nuclear weapons programs and possessing nuclear weapons. And little mention was made of the fact that the September 11 attacks were carried out with box cutters. Moeller also questions journalistic convention as a whole. By leading stories with the most recent information as enunciated by the most powerful players, Moeller concludes, they can neglect the vital role to check and balance the exercise of the executive power. – YaleGlobal

Weapons of Mass Destruction and the Media: Anatomy of a Failure

Caught in the patriotic fervor, US media failed to adequately question government claims in the leadup to Iraq War
Susan Moeller
Wednesday, April 14, 2004 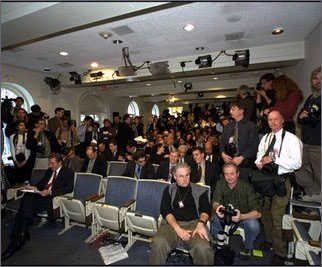 White House press room: The US media listened too much to the White House and ignored independent experts.

WASHINGTON: Although Americans were already shivering from frissons of fear provoked by the post - September 11 declaration of a "War on Terror," the Bush administration ratcheted up the dread in 2002 and 2003. The White House dominated the daily news with the specter of Iraqi weapons of mass destruction and co-opted many in the media into sympathetically covering the White House policy.

President George W. Bush set the tone for an apocalyptic approach to the WMD issue, not only because of his administration's insistence that Saddam Hussein possessed weapons that posed an immediate threat, but also because he identified WMD as an integral part of the 21st century terrorist arsenal. As his May 2003 "Victory" speech onboard the USS Lincoln detailed: "With the liberation of Iraq and Afghanistan, we have removed allies of al Qaeda, cut off sources of terrorist funding and made certain that no terrorist network will gain weapons of mass destruction from Saddam Hussein's regime." Washington Post journalist Mark Leibovitch noted the hyperbole: "The nation is being trained to consider terrorism only in its most apocalyptic forms. Many sociologists, scenario planners and counterterrorism experts believe the government and the media are too focused on extreme menaces - namely the terrorist attacks that involve weapons of mass destruction."

A recent study, 'Media Coverage of Weapons of Mass Destruction' conducted by the Center for International and Security Studies at Maryland (CISSM), confirmed Liebovitch's instincts. The study evaluated American and British media coverage of events relating to weapons of mass destruction during recent periods when WMD were big stories.The study-which I authored- was based on reporting by four US newspapers (The Christian Science Monitor, Los Angeles Times, New York Times, Washington Post), two London papers (The Daily Telegraph, The Guardian), three newsweeklies (Newsweek, U.S. News and World Report, The Economist) and the radio programs "Morning Edition" and "All Things Considered" on National Public Radio.

The study found that by October 2002, a year after the September 11 attacks, President Bush and Secretary of Defense Donald Rumsfeld's repeated linkages of terrorism, WMD and Iraq had engrained the three as a triple threat in the American media. The US and UK media covered in the study tended to reiterate the Bush administration's formulation of the "War on Terror" and its assertions that a core objective of the "War" was to prevent WMD from falling into the hands of terrorist groups. News coverage conflated all forms of terrorism. The media often quoted Rumsfeld's characterization of North Korea as a "terrorist regime" for its export of nuclear technology, but neither explored his meaning of "terrorist regime," nor contrasted it to the terrorism of al-Qaeda or of Saddam Hussein.

Media reporting on the president's remarks amplified the administration's voice: When Bush stated that Americans were vulnerable to WMD in the hands of terrorists, the media effectively magnified those fears by prioritizing that news. Front-page and top-of-the-news stories led with the president's analysis. Where alternative perspectives were presented in the coverage, they tended to be buried. The net effect was both to disseminate as well as validate the administration's message.

By May 1, 2003, when Bush declared an end to major combat operations in Iraq, when many journalists actively questioned White House and Pentagon's pronouncements, they continued to accept the administration's set of priorities. If the White House acted like a WMD story was important, so too did the media. If the White House ignored a story or an angle, the media likely did the same.

The declaration of a War on Terror and its link to weapons of mass destruction made WMD a security issue of compelling importance. The Bush administration's constant reminder that a core objective of the War on Terror was to prevent WMD from falling into the hands of American-hating terrorists catapulted the issue into the news frequently. News stories rarely examined the quotidian realities of terrorism -- the September 11 terrorists used box cutters and commercial planes, not vials of smallpox or dirty bombs, for example -- or the real but often prosaic threats related to WMDs, such as bio-security concerns, for example, or control of fissile materials. WMD became a way to provoke a knee-jerk reaction from Americans: protect America.

The media did not dispute that weapons of mass destruction were an inseparable part of global terrorism. The study noted that although individual facts about WMD were usually reported accurately, the press represented nuclear, biological, radiological and chemical weapons as a single blurry hazard -- a pattern of imprecision abetted by the White House's obfuscations. The media tended to overlook important differences between nuclear-energy and nuclear-weapons programs and between nuclear weapons programs and actual nuclear weapons. In the rush to coverage, the substantial qualitative and quantitative differences between chemical and biological agents were also conflated. Most critically, the media's failure to recognize these and other distinctions distorted reporting on the cost-benefit calculations to manage those risks, should North Korea's nuclear weapons or Russia's "loose nukes" -- poorly guarded Russian nuclear stockpile -- have been a higher WMD priority than ousting Saddam Hussein, for example? 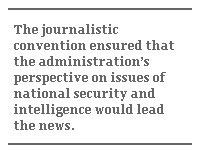 The study found that journalism's tendency to prioritize breaking-news stories and its "inverted pyramid" style of storytelling gave greater weight to the administration's point of view on WMD issues at the expense of alternative perspectives and interpretations. Poor coverage of WMD resulted less from outright political bias on the part of journalists, editors and producers than from the journalistic convention of always leading stories with the most "recent" and most "important" information as enunciated by the most "important" players. The tendency to blindly follow this convention ensured that the administration's perspective and voice on issues of national security and intelligence would lead the news as long as the White House came out with a new message for each news cycle, a tendency reinforced by the lack of a strong political opposition in fall 2002 and spring 2003.

Despite the apparent failures in reportage, not all journalists provided poor coverage of the WMD arc. Reporters Barton Gellman, Walter Pincus and Dana Milbank of the Washington Post; Bob Drogin of the Los Angeles Times; David Sanger and William Broad of the New York Times; Warren Strobel, Jonathan Landay and John Walcott of Knight Ridder; and Dafna Linzer of the Associated Press were prominent exceptions to the general pattern of WMD reportage. These reporters demonstrated a consistently high level of analysis and skepticism in their coverage of WMD events and issues. They avoided solely verbatim reportage of White House statements. In their coverage, divergent voices and multiple policy options featured prominently. On the admittedly difficult WMD beat, they neither softened their coverage of intelligence and nor reported without qualifying the contentions of anonymous sources, including Iraqi exiles and defectors. These reporters identified the limitations and probable skew of stories when the main sources were anonymous. They explained the inherent uncertainties of intelligence gathering and distinguished between intelligence collection and analysis. They understood that evaluating a country's WMD status with incomplete data was not merely an intelligence problem, but a political issue. They were careful of the content and the structure of their stories.

Yet for all these exceptions in reportage on WMD in mainstream American media, prior to the summer of 2003, it was rare for even these reporters to critically probe the political choices that underlay the link between September 11, weapons of mass destruction and Iraq in the "War on Terror." The stultifying patriotic climate not only prompted sympathetic coverage of White House policy, it silenced much of the political opposition that the media could have utilized in order to provide alternative voices and policy options. As a result, most American media did not act to check and balance the exercise of executive power, essential to the functioning of a civil democracy.

Susan Moeller teaches media and international affairs in the Philip Merrill College of Journalism at the University of Maryland, College Park. She is the author of Compassion Fatigue: How the Media Sell Disease, Famine, War and Death, and is finishing a new book titled, A Hierarchy of Innocence: Media and Public Policy in the Age of Terrorism.