International trade raises the standard of living for most people in any country, but inevitably results in a loss of jobs for a few. The challenge for governments is identifying and implementing policies that support readjustment of those few workers at a reasonable cost. International trade accounted for about 4 percent of layoffs in Canada, the US and the EU in 2000, according to the Organization for Economic Cooperation and Development (OECD). Nations react to such layoffs with a range of policies: minimal state intervention and a flexible labor market, as found in the US; ample public support combined with strict government controls over the labor market, as found in France; and a generous public safety net and flexible labor market, as found in Denmark. The French style of readjustment results in longer spells of unemployment while the US style results in lower wages. The Danish system reduces unemployment and increases individual security, while giving businesses freedom to engage in trade decisions. But this system cannot be embraced by all. Emerging economies must take heed: With tight government controls over the labor market and less public funds to support retraining or other assistance, they can expect labor readjustment to be particularly painful. Lack of public assistance for workers who lose jobs could jeopardize the future of free trade. – YaleGlobal

Governments have a range of policies to expand trade while minimizing the loss of jobs
Gustav Ranis
Thursday, August 10, 2006 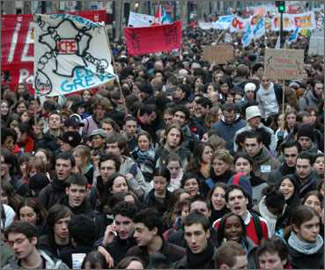 NEW HAVEN: International trade contributes to rising living standards for all countries. Yet while promoting overall productivity, a country’s trade liberalization may reduce employment and welfare for some individuals even as it improves the welfare of others. Job and wage losses in some sectors are an inevitable outcome of increased globalization. Policymakers face the challenge of minimizing the readjustment costs so that they do not outweigh the broad gains achieved from freer trade.

The OECD Employment Outlook in 2005 estimated that international trade accounted for up to 4 percent of all permanent layoffs in Canada, the US and the EU in 2000. Manufacturing generally suffers a higher displacement rate than services, especially in industries such as textiles, clothing and automobiles, where international competition is most intense. Workers in those industries struggle to find new jobs, often accepting substantial pay cuts if they do. Such unemployment, of course, creates formidable political opposition to freer trade, out of proportion to the relatively small number affected.

The ease with which labor markets adapt to shocks caused by international trade influences the prospects for workers displaced by trade. Governments have a range of strategic choices to address the problem, including indirect policies (employment-protection legislation, wage-setting practices), direct policies (job search assistance, unemployment insurance, retraining) and targeted programs (trade adjustment assistance). Determining the right mix of policies for a particular country is not an easy task.

Analysts point to Denmark as a good model since it has achieved outstanding labor-market results when coping with the impact of increased trade in comparison with other OECD countries. Denmark has cut its unemployment from about 10 percent in the early 1990s to less than 5 percent now. The main ingredient for the Danish success is a system called “flexicurity,” a set of liberal policies for hiring and firing, allowing relatively frictionless adjustment to shocks caused by international trade. A generous system of carefully monitored unemployment benefits and funding for retraining displaced workers complement Denmark’s labor-market flexibility.

The Danish experience may not be easy to replicate in other OECD countries or the developing world as each country has its own structural characteristics. We can, however, classify countries according to their labor market flexibility with potential for private-sector participation and safety net contributions from the public sector. 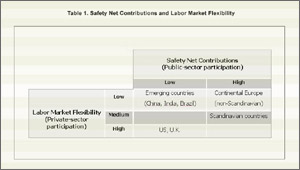 Table 1, extended to the more advanced developing countries, provides an overview of labor- market and safety-net combinations. Countries such as France and Germany are relatively weak in labor-market flexibility and try to make up for it with larger income safety nets. The reverse is true in the US, reflecting wariness toward state intervention. For example, expenditures on unemployment insurance and retraining account for only 0.5 percent of GDP in the US, while France and Germany’s expenditures amount to 2.95 percent and 3.5 percent, respectively. The Scandinavian countries occupy a middle ground.

Countries in Continental Europe tend to have employment-protection legislation and wage-setting practices that hamper firms’ ability to adjust and worker’s incentives to change jobs. As a result, displaced workers in Europe have longer spells of unemployment. Only 52 percent of workers displaced from jobs in high international competition industries are re-employed two years later in Europe, compared to 63 percent in the US. Continental Europe might well consider long-run strategies that promote institutional change such as less strict employment protection and portable pension and medical benefits.

But such institutional changes are no easy matter, as demonstrated by the student protest following France’s recent attempt to increase flexibility in labor markets by easing regulations on firing employees during their first two years of hire. In addition, public expenditures on retraining and unemployment insurance could be more efficient in the short run. Public labor offices could monitor unemployed workers more closely through decentralized labor-counseling services, creating incentives for their clients to seek new jobs.

In contrast, the US and the UK have more flexible labor markets that reduce the length of unemployment of displaced workers. However, reallocated workers in the US tend to incur larger wage losses than those in Europe. The share of re-employed US workers experiencing an earnings loss of 3 percent or more is 22 percent versus only 8 percent in Europe. In such a case, the best policy response could come in the form of additional short-run income insurance and retraining. A larger number of workers would then receive unemployment benefits and retraining while they look for employment, increasing the chances of finding a job with less wage loss.

The US has operated a targeted program for trade-displaced workers, or Trade Adjustment Assistance (TAA), for 40 years without clear results. Analysts argue that TAA offers a real advantage over reliance on general employment programs, given the fact that unemployment insurance in the US is provided at a relatively modest level. Nevertheless, TAA critics argue that the assistance was not tailored to meet the distinct needs of workers displaced by trade and that the cumbersome procedure of certifying job losers for TAA has resulted in few participants and long delays in the receipt of adjustment assistance.

Finally, it should be emphasized that any enhanced general opening to international trade imposes major impact on developing countries’ labor markets. Emerging countries such as India, Brazil and China are already experiencing substantial industrial restructuring as they become more open to trade. These countries have relatively inflexible labor markets and would need to devote more public funds to implementing direct policies such as unemployment insurance, retraining or job search assistance. However, the countries understandably target health and education for fiscal priorities, leaving little scope for labor-market interventions. Hence, given strong political opposition to liberalizing labor markets, the inability or unwillingness to provide safety-net payments will likely jeopardize trade liberalization.

Recent talks during the WTO Hong Kong Ministerial Conference proposed channeling some development aid to trade purposes. This initiative could imply not only technical assistance, but also funds allocated to targeted programs for trade-displaced workers in emerging countries. Moreover, such an “aid for trade” initiative could evolve into a more ambitious Global Trade Adjustment Assistance (GTAA) scheme financed out of ODA and administered by the WTO or the World Bank, following agreed negotiated rules. In this fashion, emerging countries could supplement their scarce availability of public resources for labor market adjustment with GTAA funds.

Gustav Ranis is the Frank Altschul Professor Emeritus of International Economics, Yale University. David Corderi has an MA from Yale and is a research assistant at Yale University.