The United Nations, throughout its 60 years, has never seen a tragedy on par with the South Asian tsunami. This astonishing display of nature's furor rendered political borders insignificant, and the overwhelmingly sympathetic international response has revealed the strength of global interconnectedness. At the January 6 Jakarta summit, the UN officially assumed the helm of relief effort coordination. And in this role, writes political scientist Ramesh Thakur, the UN has a chance to showcase its best. "The United Nations is the embodiment of the international community and the custodian of world conscience," Thakur says. Despite its flaws, he suggests, the organization is uniquely suited to deal with a global challenge of this magnitude: "It is an idea, a symbol of an 'imagined community' of strangers." Perhaps the tsunami will allow the UN to transform its symbolic value into action. –YaleGlobal

The Indian Ocean tsunami presents a unique opportunity for the United Nations to assert its legitimacy
Ramesh Thakur
Monday, January 10, 2005 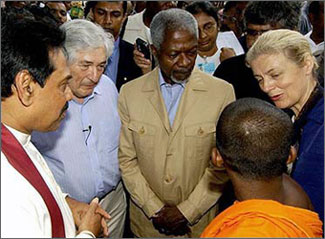 TOKYO: The challenge posed by the catastrophic earthquake and the tsunami of December 26, 2004, is a vivid reminder of the advantages of considering security within the broader framework of human security. The natural disaster caused incalculable loss of life in many countries around the perimeter of the Indian Ocean. When we include the thousands of Westerners vacationing in resorts, we realize just how many continents are united in this tragedy. The death toll quickly climbed to 150,000, with warnings that it could almost double due to unaccounted-for persons, disease, and malnutrition. Behind the statistics are the grim human costs of the tragedy.

Mother nature did not discriminate between Muslim and Christian, Tamil and Sinhalese, poor and rich, native and foreigner. She claimed them all equally to her bosom in the sea to bring forcefully home the realization that we are indeed one human family. We inhabit the same planet, and artificially constructed enmity and rivalry based on the competitive and exclusionary concept of national security can be irrelevant to securing citizens against the real threats to their safety.

The revolution in information technology provides immediate access to information worldwide, makes global communications instantaneous, and has heightened awareness of conflicts and disasters, wherever they occur, with compelling visual images of the resultant suffering. It also makes it possible to mobilize humanitarian assistance for rescue, relief, assistance, and reconstruction in real time. The United Nations can deploy physically to humanitarian emergencies anywhere in the world within 24 hours, barring any political or bureaucratic hurdles.

Geographical unity has been psychologically reinforced with the force of the tsunami that spread so speedily and powerfully the length and breadth of the Indian Ocean, all the way across to the east coast of Africa. The major powers have an opportunity to assist victims based on human solidarity and put their assets at the service of ravaged humanity along the rim of fire. The tragedy is proof that development and security are two sides of the same coin. It offers a rare chance for smaller nations to think of large and powerful neighbors as helpful friends, not threatening bullies.

The distinctive geography of South and Southeast Asia gives India a major commercial and geostrategic location astride the sea-lanes of communication between the Middle East and East Asia. India redirected well-meaning foreign emergency aid workers to worse hit Indonesia and Sri Lanka instead, saying it was fully capable of meeting its own needs. The ability to handle massive death and destruction while at the same time helping Indonesia, Sri Lanka, and the Maldives was welcomed by Indians as a sign of self-sufficiency, self-confidence, status, and strength. With the most powerful navy in the Indian Ocean, India converted three survey ships to floating hospitals and dispatched them to its own far-flung Andaman and Nicobar Islands, Indonesia, and Sri Lanka.

The last two years were among the UN's worst. The tsunami has the potential to showcase the UN at its best. The politics of competitive nationalism has given way to the economics of "competitive compassionism" as countries and people try to outbid each other in offering aid. The gentle jibe of stinginess by the top UN humanitarian official stung many governments into speedier and more generous response.

A number of UN agencies swung immediately into action as soon as the world awoke to the magnitude of the disaster. The Secretary-General cancelled his annual holiday, returned to his desk in New York, joined the crisis summit meeting in Jakarta, and flew on to Sri Lanka. Press reports described him as wrought by what he had seen: Nothing on this scale had happened during the UN's 60-year lifespan.

At the donor summit in Jakarta on January 6, many, including most of the afflicted countries, urged the UN to take the leading role. President Susilo Bambang Yudhoyono of Indonesia, the worst-hit nation, said, "We must ensure that we benefit from the experience of the United Nations in establishing and managing special emergency funds and relief efforts." US Secretary of State Colin Powell confirmed that the four-nation core group to coordinate tsunami relief (Australia, India, Japan, and the United States) would be disbanded and folded into broader UN operations.

The Jakarta summit also decided to set up a tsunami warning system around the Indian Ocean, similar to the one already in existence around the Pacific. No doubt there will be efforts to set up a worldwide system. This offers an excellent opportunity for Japan to export its cutting-edge science and early warning systems to Asian neighbors.

It remains to be seen how much of the pledged aid will actually materialize, and when. Of course, there were ulterior political motives in the background of some of the pledges. Australia and the United States were keen to demonstrate their compassionate side after their self-inflicted isolation over Iraq and the alienation of most Muslim and world sentiment. US military assets in Asia - size, mobility, and flexibility - proved very helpful in their deployment for humanitarian disaster rescue and relief operations. Japan was keen to offset its image as a one-dimensional power limited to checkbook diplomacy.

But these were background, not primary, motivators. The overriding reaction among Westerners - who responded with astonishing generosity based on distress shared from a distance - was one of sympathy and the desire to do something, anything, to help. The opening of hearts and wallets was so spontaneous and generous that Doctors Without Borders urged donors to stop sending it money for tsunami victims, saying it had enough funds to manage relief efforts in the region.

The actual tsunami was a transient phenomenon. Will the tsunami of human solidarity prove to be ephemeral or have lasting significance? It offers the potential to mobilize the world for the "war on want." The UN is devoting 2005 to taking stock of the Millennium Development Goals which offer concrete, measurable targets for when and how the war on want can be won. The tragedy offers an opportunity to heal the rift between the United States and the UN and bridge the Atlantic divide.

We live in the age of an internationalized human conscience. More foreign travel by growing numbers of people has shrunk the mental and emotional distance between countries: It could have been any one of us, our family on the warm and welcoming beaches of southern Asia over the festive season.

The United Nations is the embodiment of the international community and the custodian of world conscience. It is also an international bureaucracy with many failings and flaws, and a forum often used and abused by governments - who control it, not the other way round -for finger pointing, not problem solving. Too often, the UN has been shown to be proof against occasions of the larger kind.

But more than these attributes of bureaucratic rigidity, institutional timidity, and intergovernmental trench warfare, the United Nations is the one body that houses the divided fragments of humanity. It is an idea, a symbol of an "imagined community" of strangers. It exists to bring about a world where fear is changed to hope, want gives way to dignity, and apprehensions are turned into aspirations. The tsunami disaster was a powerful reminder of this reality.