Whither NATO? European Defense Force May Counterbalance US Power

The European Union's planned appointment of a foreign minister signals the bloc's desire to speak with a unified voice on global issues and to compete with the US as an international power. Now, writes Shada Islam, the US is protesting an EU proposal for strong, independent defense capabilities, calling it a serious threat to transatlantic relations. As member nations begin to debate the content of a European constitution, France and Germany are pushing the EU to include a mutual defense clause and a defense structure independent of NATO. They may have already enlisted the support of British Prime Minister Tony Blair, who is eager to mend fences after the contentious Iraq war debate. But implementation of the policy may hit roadblocks – European governments generally have fewer financial and strategic defense resources than the US, and many of the ten European states joining the union next year may oppose the initiative in order to avoid angering the US. Current EU officials, however, say that the proposal is no cause for alarm to the US, as a new European defense force and NATO would perform "complementary tasks". – YaleGlobal

Whither NATO? European Defense Force May Counterbalance US Power 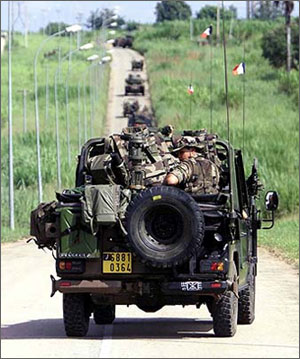 French soldiers on the move - away from NATO.

BRUSSELS: Having launched negotiations on a new European Union constitution in Rome in early October, the bloc's governments have become entangled in a painful debate on the shape and ambitions of a future Union of 25 states. With ten new members joining in May 2004, a treaty revision is clearly needed to facilitate quick and effective decisions.

Europe's constitutional discussions – being held within a 25-nation "inter-governmental conference" - are of Byzantine complexity. Recent quarrels have focused on voting rights for members and the number of commissioners allowed for each country.

But mixed up in the technical debate are also signs that the Union's governments are overcoming their rift over the US-led war against Iraq and striving to craft policies aimed at turning the EU into a more influential global player.

Plans to appoint a first-ever EU foreign minister are the most visible sign of the bloc's renewed determination to speak with one voice on world affairs. But even more significantly, almost two years after they launched a single European currency to rival the US dollar, EU governments appear ready to challenge America's dominance in defense and security.

French President Jacques Chirac, Germany's Gerhard Schroeder, and the leaders of Belgium and Luxembourg are pushing for EU military planning and command structures, separate and independent from the US-led NATO alliance. The four leaders also want clear treaty provisions for "structured cooperation" on defense which would allow small groups of EU nations to forge ahead with military integration without waiting for potential skeptics to catch up. And in a first for the EU, they want the new constitution to include a mutual defense clause. 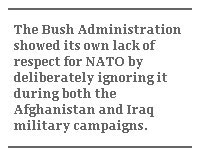 Officials in Washington make no secret of their suspicions of the EU's defense moves, especially since the four countries leading the initiative opposed the Iraq war and are refusing to take part in the country's post-war reconstruction effort. Americans are especially worried at signs that British Prime Minister Tony Blair – America's staunchest European ally and a strong opponent of any non-NATO based European defense cooperation – may be starting to sympathize with his continental counterparts on EU defense plans.

US Defense Secretary Donald Rumsfeld used a NATO meeting in early October to warn Europeans of his opposition to the Union's military ambitions.. A few weeks later, US envoy to NATO Nicholas Burns told a meeting of the alliance's 19 members in Brussels that independent EU defense represented "one of the greatest dangers to the transatlantic relationship." NATO Secretary General George Robertson has cautioned EU governments on wasting resources by duplicating alliance structures and capabilities, telling the four EU defense pioneers that what Europe needs are "more usable soldiers and fewer paper armies." 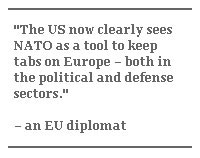 Europeans have so far resisted the temptation to hit out publicly at the US – but many diplomats are privately angry at what they view as US short-sightedness. Washington has been pressing Europeans for years to get their military act together and to stop relying on the US. The Bush Administration showed its own lack of respect for NATO by deliberately ignoring it during both the Afghanistan and Iraq military campaigns, seeing the alliance more as a post-war "cleaning lady" than an effective military body. "The US now clearly sees NATO as a tool to keep tabs on Europe – both in the political and defense sectors," says an EU diplomat.

Still, EU policymakers, determined to avoid another transatlantic battle reminiscent of recent quarrels over the Iraq war, are struggling to ease US concerns. EU foreign and security policy chief Javier Solana assured a joint EU-NATO meeting in Brussels on October that NATO would be kept well-briefed on EU military developments, vowing also that future European defense structures would never compete with or upstage the Alliance.

Despite these reassuring words, however, moves to create an autonomous EU defense will not be stopped by European governments. Solana, Chirac, and Schroeder have underlined in separate comments that being loyal to NATO does not mean killing plans for setting up an independent European military headquarters with operational as well as planning capacities. Developing an authoritative EU foreign policy requires the creation of autonomous defense, says a French diplomat. "The issue is simple," adds an EU official. "When it acts with NATO, the EU will use NATO's military assets. When it acts alone, the EU must be able to plan and conduct its operations independently."

EU defense policy has in fact already moved from the drawing board into action – albeit modestly. The EU's small military mission in Macedonia is being conducted with the use of NATO assets. More significantly, the bloc's peace-keeping "Artemis" operation in Congo this June – undertaken at the United Nations' request - had no links with NATO and was deployed using French planning and command structures. Even Blair acknowledges that there is nothing wrong with the EU developing its own military planning capacity for operations that Washington and NATO do not wish to undertake.

Whether the US likes it or not, Britain will be pressed by its partners to become part of the European plans. As French Foreign Minister Dominique de Villepin put it, "there will be no Europe without European defense – and no European defense without Britain." This pressure may very well work. The British leader, who fell out with Chirac and Schroeder because of his pro-war stance on Iraq is clearly eager to mend fences with his EU counterparts before next year's enlargement. Blair also realizes that a European defense force would be dominated by Britain's large army, putting it in the EU's vanguard on at least this issue.

Still, an EU defense union is hardly going to become a reality overnight. Solana is pressing EU governments to step up their defense expenditure, but none except for Greece match the 3.2 percent of GDP that American spends on defense. Much needs to be done to improve the performance of European forces in respect to their availability, deployment, and inter-operability. The EU needs to develop a range of "strategic" capabilities, including the strategic mobility to deliver forces rapidly to the field of operations, headquarters to command and control the forces and improve intelligence information. Also required is a strengthening of essential operational capabilities, including resources for conducting search and rescue operations and air-to-air fuelling.

Defense is the most politically explosive issue being discussed in the constitutional talks, but other questions are also divisive. Unfortunately, no movement forward on a common defense community will be possible without general agreements on the remaining constitutional debates, which are not likely to be resolved before the end of this year. Even then, it remains unclear how soon a common defense can be implemented. Unwilling to anger the US, many of the central and eastern European states joining the EU next year are hostile to the Franco-German initiative. And NATO's incoming Secretary General, Jaap de Hoop Scheffer, currently Dutch foreign minister, is expected to be at least as suspicious of the EU's plans as Robertson. But EU policymakers insist that NATO need not worry about its future. "We see NATO and EU as performing complementary defense tasks," says an EU diplomat in Brussels. "NATO will be kept informed of our plans... but we intend to move on."

Shada Islam is a Brussels-based journalist specializing in EU trade policy and Europe’s relations with Asia, Africa and the Middle East.