Why the Discomfort Over Free Trade

Many benefits flow from free trade, and attempts to “protect” economies from competition are doomed. Yet free trade has fallen into disrepute, as more workers, voters and politicians express skepticism, questioning why most rewards flow to a few. Costa Rica’s former vice-president, Kevin Casas-Zamora, insists that advocates for free trade, and he counts himself as one, must examine the problems and find ways to address complaints about double standards, rising inequality, a decline in democracy that have often accompanied free trade. To avoid limits on free trade, advocates must examine processes and work to eliminate corruption, painful disruptions and a lopsided punishment system that favors the developed world, such as strict enforcement of intellectual-property right violations and shrugs over subsidies for wealthy farmers. If trade is to remain free in democratic societies, a majority of people must realize tangible benefits in their communities. – YaleGlobal

Why the Discomfort Over Free Trade 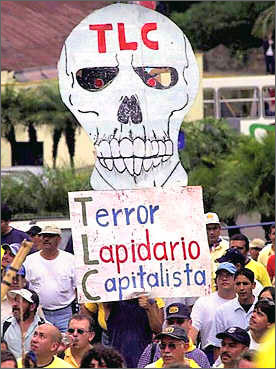 WASHINGTON: Generally speaking, the cause of free trade has it rough in the world today. Despite the compelling theoretical arguments that one can muster in favor of free trade, it’s increasingly unpopular in the US and even more so in much of the developing world, certainly in Latin America.

In all likelihood, part of the answer lies not in the notion of free trade itself but how trade liberalization is pursued worldwide, too often linked with hypocrisy, guilt by association, democratic deficit and disregard for inequality. And this, I must warn the readers, is written by someone who favors trade liberalization and fully understands the rewards that free trade could help us reap.

Unease with free trade in the developing world stems from at least four key reasons:

First, there is the perception that the whole discourse and architecture of international trade smacks of double standards and hypocrisy. When it comes to free trade, we can certainly paraphrase George Orwell’s memorable quote: We are all equal, but some are more equal than others.

Simply put, emerging economies, whose weight and importance in the world economy are becoming all too evident these days, are simply not willing to play along in a charade of free trade organized by the developed countries. The world has changed.

At this point it’s become clear to everyone that trade happens to be freest in those sectors where the developed countries have crushing comparative advantages. That’s why there is a lot of freedom of movement for capital, but hardly any for labor. That’s why there is no free trade when it comes to agriculture, which is exactly why the Doha Round has stalled. That’s why free trade agreements come, somewhat strangely, with evermore restrictive rules regarding intellectual property, a point to which I will return.

And besides all this, there is some annoyance with the reluctance to acknowledge that, no matter what the long-term benefits of free trade may be, trade liberalization entails serious economic and social disruptions in the short run, which in the case of many developing countries require at least some compensation aid. Such a commitment to support the transition towards free trade with development aid seems to be conspicuously absent from most trade agreements, notably those signed by the US. The developed world subsidizes their own farmers to the tune of US$500 billion a year, about five times as much as the total sum available for Official Development Assistance. 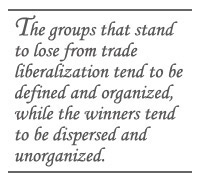 Second, in a large swath of the developing world – most notably in Latin America – trade liberalization carries a kind of “guilt by association.” Trade liberalization was one of the recommendations of the so-called “Washington Consensus” alongside fiscal responsibility, focalization of social expenditure and, generally speaking, a shift towards a leaner state. Most notably privatization of public enterprises and utilities was part of the package, and this partly explains the problem. According to Latinobarómetro 2007, a regional survey, only 35 percent of Latin Americans believe that the privatization of public firms over the past 20 years or so has been beneficial to their country. In general, privatization in Latin America was seen as an orgy of corruption and, in some cases, as the replacement of state monopolies with private monopolies, with few tangible benefits for citizens. It’s crucial to understand that in places like Latin America discussions on trade liberalization are never about trade liberalization alone. Other factors are thrown into the mix, and some can be very negative.

Third, when pursuing trade liberalization, and particularly when signing free trade agreements, democratic discussion has been muted. This is not casual. There are real problems with the political economy of trade liberalization that make it difficult to win an open discussion about it, no matter how compelling the theoretical arguments may be. The first hurdle is a typical collective-action problem: the groups that stand to lose from trade liberalization tend to be defined and organized, while the winners of trade liberalization – consumers, for instance – tend to be dispersed and unorganized. The second problem is one of uncertainty. Dani Rodrik and Raquel Fernández in a 1990 paper point to the idea that free trade is unpopular because it’s nearly impossible to identify ex ante the winners of the reform; therefore it’s very difficult to mobilize political support for trade. 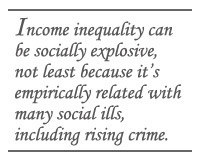 For whatever reason, the truth is that there are few cases in which the issue of trade liberalization has been at the center of an open democratic debate. It was certainly the case in Costa Rica, where the ratification of CAFTA was recently put to referendum – a low quality debate, to be sure, but a debate in the end. Maybe it was the case in Canada, where the ratification of NAFTA was intensely debated in the run-up to the 1988 election. And that’s it. In a way, trade liberalization is affected by the same kind of democratic deficit that one sees, for instance, in the project of European integration, with many citizens feeling that they’re taken for granted.

The fourth point is crucial. While the effects of trade liberalization on poverty are generally positive, its effects on income distribution are debatable at best. Trade liberalization has come to be identified with growing income inequality, within and between countries.

The attraction of foreign direct investment, in particular, has tended to skew the salary structure in many countries. In places like Latin America, where income inequality is already unbearably high, this tends to anger people and, not surprisingly, they react either on the streets or at the polls by selecting leaders who are skeptical of free trade and, more broadly, globalization. Income inequality can be socially explosive, not least because it’s empirically related with many social ills, including rising crime, a pressing issue in Latin America and elsewhere in the developing world. 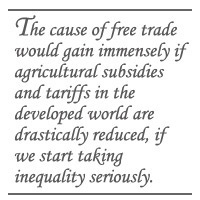 One of the most remarkable and disturbing trends of inequality between countries is how the free trade discourse co-exists with truly punishing rules regarding intellectual property, which is held in most part by the developed world. Few would dispute that solid enforcement of intellectual property rights is essential for the production of knowledge. Yet, it’s highly dubious that the introduction of ever-stricter protections of intellectual property rights will lead to more welfare worldwide. Unfortunately, of all the factors in development, the production of knowledge is concentrated in a few hands. According to figures of the World Intellectual Property Organization, 87 percent of the patents granted worldwide in 2005 came from the top 10 countries; only China and maybe South Korea can be considered developing countries. More than half of the total, 53 percent, came from Japan and the US alone. One does not need to be a fortuneteller to foresee this phenomenon perpetuating, indeed enlarging, income gaps between countries and regions.

The cause of free trade would gain immensely if each of these points is seriously addressed: if agricultural subsidies and tariffs in the developed world are drastically reduced; if trade liberalization is decoupled from other free-market prescriptions that may be more controversial; if open democratic debates are held about trade liberalization, even if some of those discussions are lost; and, finally, if we start taking inequality seriously, particularly when it comes to intellectual property rules. It’s a tall order, but until met, free trade will be doomed to live dangerously in the developing world, prevailing in scholarly debates and in little else.

Kevin Casas-Zamora is a senior fellow in foreign policy at the Brookings Institution, in Washington DC. In 2006-2007, he was minister of National Planning and Economic Policy and second vice-president of the Republic of Costa Rica. He was selected as Young Global Leader by the World Economic Forum in 2007.