With the US at war in bordering Iraq and Afghanistan, with Israel invading the Gaza Strip, any quest by Iran for nuclear weapons does not seem so outlandish. Iran insists its uranium-enrichment program is for peaceful purposes, but by sending rockets to its proxies, Hamas in Palestine and Hezbollah in Lebanon, to cause harm to Israel, it has not proved peaceful intentions. The success in its proxy war emboldens Iranian mullahs who struggle with domestic economic problems and dashes efforts at achieving peace in the Middle East, explains international affairs consultant Arch Roberts Jr. He insists there's no plausible peaceful reason for Iran’s nuclear program, and yet the nation finds it hard to change its strategic calculation. As part of a solution, Roberts urges a high-level Middle East peace conference, emphasizing creative no-first-use nuclear policies as embraced by China, guaranteeing Israeli and Iranian borders, and focusing on the consequences of nuclear competition and neglected promises in the Treaty on the Non-Proliferation of Nuclear Weapons. In truth, no nation needs weapons that threaten the survival of so many, Roberts concludes that the international community – in particular Israel – has nothing to lose by urging Iran to join a regional peace conference, requesting cooperation and signaling the nation’s “undeniable influence.” – YaleGlobal 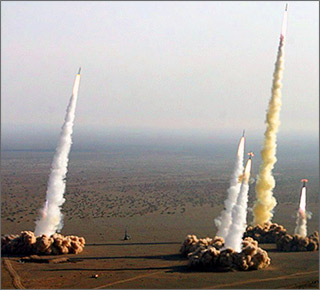 Rocketing message: In July 2008 Iran test fired missiles as part of its maneuver

to draw world attention to its growing capability

PONTE VEDRA BEACH, FL: Expert observers of Iran hang on the latest reports from the International Atomic Energy Agency of how many centrifuges are running, how far the country must go to build a bomb, the latest inflammatory remarks from President Ahmedinejad, speculation about a lame-duck Bush administration military strike, or the same from Olmert’s Israel.

Iran’s decision on nuclear weapons was made at least two decades ago. Despite its professed peaceful intentions, nobody in their right mind would disagree with the notion that Iran maximizes its room for maneuver by all possible means, with nuclear arms or without. Tehran doesn’t mind foreign suspicions at all; rather, its strategic interest is to encourage them, if only to achieve the effect of nuclear deterrence before possessing a nuclear device. Iran’s policy has created a virtual deterrent, and its policies across the board, from the mullahs’ point of view, amount to “constructive irresponsibility.” Iran wants us to spend time guessing its next step. 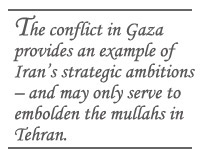 The current conflict in Gaza provides an example of Iran’s strategic ambitions. Iran has long used Hamas and Hezbollah as proxies in pursuit of its interests. At arm’s length, these organizations support Iran’s long-term goals: tie down Israel’s actions in the short term, and frustrate all efforts at Middle East peace. Israel’s 2006 failure in Lebanon, chasing down Hezbollah, only served to embolden the mullahs in Tehran. The assault on Gaza, while it may stop rocket attacks on civilians, could be expected to achieve much the same result.

There’s no plausible peaceful explanation for Iran’s uranium enrichment program: The fuel for its first nuclear reactor at Bushehr will be provided by Russia, with a requirement that spent fuel, full of weapons-usable plutonium, will be returned to Russia. Plans for future reactor construction are well in the distance. So the non-bomb uranium Iran has produced to date has no purpose besides that of a nuclear “breakout” option: kick out the inspectors, run the uranium through the centrifuges several more times, work on missiles and other delivery means, and finish up with a couple of bombs. In the view of Iranian leaders, this posture improves Iran’s strategic military perspective. 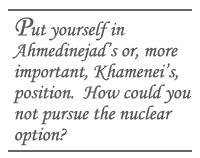 Put yourself in Ahmedinejad’s, or more important, Khamenei’s, position. How could you not pursue the nuclear option? A proud and ancient nation, subject to a long history of Western meddling, a Persian oasis in a multitude of Arabs and others, a combatant in many bloody wars, must have insecurities that far outweigh the prospects of UN Security Council resolutions and sanctions. The flood of diplomats into Tehran over the last several years only increased the value that Iran’s leaders, and much of its public, place on the virtual deterrent option that’s a stockpile of uranium sufficient for a bomb.

Consider the current environment and the history that informs Iran's leaders. Iran has declared the United States its principal strategic threat for three decades; indeed, this enmity has been a central organizing principle for the government. Flirtations with more normal relations with the US have been frequent, from the end of the Carter Administration through Iran-Contra to the present consideration of opening an American Interests Section in Tehran. But the government of Iran has been divided in important ways since the revolution, with many observers noting its conflicting signals to the major powers, simultaneously conciliatory and defiant. This behavior only increased during the term of fiery Ahmadinejad.

According to the Federation of American Scientists, Israel has had nuclear-capable missiles since 1966 – perhaps the most significant political driver of Iran's national policy. But there are many others as well: Saddam Hussein's Iraq, using chemical weapons and pursuing nuclear ones, waged a punishing war against Iran for a decade after the 1979 revolution. The US has had a considerable military presence on Iran's land borders since 2001, a continuous and significant naval presence in the Gulf for longer, and it shot down an Iranian airliner during the Reagan administration. 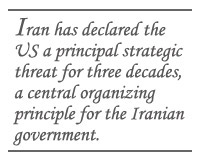 In Kenneth Pollack's excellent book, "The Persian Puzzle," he relates the tension among Iranian policymakers between transparency and concealment regarding the nuclear option. Concealment was the policy for 20 years until the revelations of 2002. Once revealed, the public face of Iran’s policy changed to one of declarations of capability and denials of intent to build a nuclear weapon. On this question, Iran has many models to consider. Israel, as late as 2006, famously stated it would not be the first country to "introduce" nuclear weapons into the Middle East, a contrived ambiguity that has served its national interests, but leaves no confusion about its intent. Ironically, this Israeli policy is perhaps most consistent with Iran's current posture. The mere possibility of an Iranian nuclear weapon approximates its actual possession.

Another mature nuclear power in the neighborhood, India, has pursued a similar approach to Iran’s. After its first nuclear test in 1974, India tried to persuade the world that the test was for peaceful purposes, with little success and few penalties. North Korea conducted a nuclear test in 2006, in the midst of the Six-Party talks on denuclearization of the Korean peninsula, another virtual deterrent.

The model Iran may follow is China, which pursues a policy best described by Jeffrey Lewis and others as "minimum deterrence." Apart from fielding the largest army in the world, China maintains perhaps 200 nuclear weapons and declares a no-first-use policy. China enjoys a level of respect and consideration Iran's leaders have never enjoyed, but to which they logically aspire.

Let’s go back to the box in which Iran’s policymakers have placed themselves: After at least two decades, Iran got caught, publicly, in 2002, and had to submit to inspections of items never declared to the IAEA. Libya renounced its nuclear program around the same time. If you’re the Supreme Leader in Iran, what do you do? You pretend to cooperate with inspectors, work your Non-Aligned Movement allies in the UN system and slow-roll the slow-response mechanisms of the UN – all the while not compromising the strategic decision made decades ago. This is predictable, not radical behavior. Iran can always hang opposition to its actions from the US and others on outsiders and “Zionist tendencies,” and pin IAEA Director General Mohamed ElBaradei’s technical statements on the fact that he’s an Egyptian, and therefore suspect. (Nobel Peace Prize winner ElBaradei must have the patience of Job.) 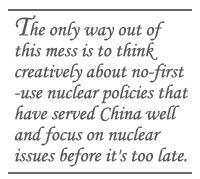 So what’s to be done? The only way out of this mess is more of the same: call a high-level Middle East peace conference; think creatively about the kind of no-first-use nuclear policies that have served China well; include Israel while protecting its strategic interests; find ways to guarantee Israeli and Iranian borders; and, most important, focus on nuclear issues before it's too late.

No one can doubt the commitment of the US to Israel’s security, nor should anyone question the value of a prospective region-wide commitment to security behind currently-agreed borders. Israel might even rethink its own nuclear posture in light of such developments.

Iran would likely participate in any regional conference devoted to Middle East peace. Such a meeting would mark its undeniable influence in the region and perhaps mitigate the toxic relations existing with the US since 1979. It might just reduce the nuclear impulses that Iran cultivates as a counteraction to US and Israeli military power, as well as those they may harbor in a long-range analysis of a nuclear Turkey or Saudi Arabia. Why not? Absent an acceptable, overarching alternative, accepting Iran’s ambiguous nuclear power may all we’re left with.

Arch Roberts Jr. is a consultant on international affairs, formerly a staff member of the House Foreign Affairs Committee, the International Atomic Energy Agency, and elsewhere in the United Nations system. These views are his own.