Will the Crisis Reverse Global Migration?

The current global financial crisis has led many an analyst to predict a reversal of recent growth trends in migration and a dramatic fall in remittances. While some data may confirm such predictions, it may not turn out that way in the end. As economist Jayati Ghosh argues, remittances may not decline as much due to gender issues and demographic factors and migration may be stickier than expected. Gender factors such as jobs that attract males vs. females could have an effect on remittance trends. Men migrants tend to work in construction and manufacturing, sectors largely hurt by the financial crisis and most affected by the business cycle. Women migrants tend to work in care-giver services whose employment depends on demographic trends in the economy. Women migrants also tend to remit more than men. Migrants may not return home in high numbers as expected precisely because while developed countries have suffered substantial job losses, the prospect in their home countries is even worse. Thus, migrants will remain and may actually see growing demand as employers trade down to lower cost labor. While the jury is still out on what the ultimate impact the current crisis may have on migration, the aging of most developed nations’ population is likely to outweigh the dampening effect of the crisis in the long run. – YaleGlobal

Will the Crisis Reverse Global Migration?

The crisis will affect migration, but less than feared and in more complex ways
Jayati Ghosh
Tuesday, July 14, 2009 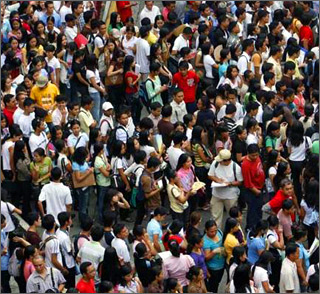 NEW DELHI: Migration has been one of the more important means of greater global integration, and, as the economic crisis has gripped the developed world, many have worried about its impact on such integration, especially falling remittances. A closer examination of the nature of migrant workers’ role in the economy suggests more complex outcomes, with somewhat less of an impact than feared.

The UN estimates that the global stock of migrants is now more than 200 million, even excluding temporary, irregular and illegal migrants. Most of these migrants hail from developing countries: in the developed world (excluding the former USSR) the share of migrants in total population more than doubled between 1960 and 2005, from four percent to nearly ten percent, while it has declined in less developed countries. As the crisis unfolded, there was fear that international migration and associated remittances would be among the first casualties. 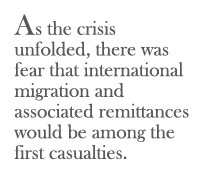 It is true that most of this migration has been driven by economic forces and has given rise to rapidly expanding remittance flows, which have become the most important source of foreign exchange for many developing countries. The IMF estimates total remittance flows to developing countries to be nearly $300 billion in 2009, significantly more than all forms of capital flows put together. This has provided crucial foreign exchange and been a major contributor to balance of payments stability for countries as far apart as the Philippines and Guatemala, and even for large countries like India and China, where remittances have played a significant role in domestic consumption.

Other elements of global integration have been adversely affected by the crisis: exports have declined sharply across the world, and capital flows have “deglobalized” in that foreign direct investment, portfolio capital and bank lending to developing countries have almost collapsed. It is only to be expected that when economic activity slows or contracts in destination countries, migrant workers are the first to be laid off and sent home. Since a lot of recent economic migration has been explicitly short-term with respect to meeting specific labor shortages in the host economies, this is even more likely.

That is why by late 2008 it was widely predicted that remittance flows would quickly show signs of decline, and initial reports also bore this out. By August 2008, remittances into Mexico (which are dominantly from workers based in the US) were already down 12 percent compared to the previous year. There was also evidence of declining remittances from other countries that relied strongly on them, such as Bangladesh, Lebanon, Jordan and Ethiopia.

But as the crisis unfolds, it is also becoming clear that the patterns of migration and remittances may be more complex than was previously imagined. In several countries (such as India) remittance inflows have actually continued to increase. To some extent, this too can be expected because even if the crisis leads to large-scale retrenchment of migrant workers who are forced to come home, they would obviously return with their accumulated savings. In such a case, there could even be a (temporary) spike in remittances rather than a continuous or sharp decline because of the crisis. Eventually, as the adverse conditions for overseas employment worsen further, this would then lead to a decline in remittance inflows.

However, it is not inevitable that there should be a sharp decline in migration and remittances. One important aspect that is frequently ignored in the discussions on migration is the gender dimension. International migration for work is highly gendered, with male migrants finding dominant representation in manufacturing and construction sectors, while women migrants are concentrated in the service sectors, such as the care economy broadly defined (including activities such as nursing and domestic work) and “entertainment”. 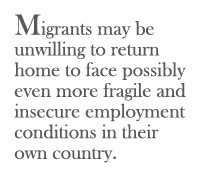 The different nature of work also affects remittance flows. In the first place, female migrants are far more likely to send remittances home, and typically send a greater proportion of their earnings back. Also, male migrant workers find that incomes are much more linked to the business cycle in the host economy, so their employment and wages tend to vary with output behavior. Thus job losses in the North during this crisis have been concentrated in construction, financial services and manufacturing, all dominated by male workers.

By contrast, the care activities dominantly performed by women workers tend to be affected by other variables such as demographic tendencies, institutional arrangements, and the extent to which women work outside the home in the host country. So employment in such activities is often unaffected by the business cycle, or at least responds to a lesser extent. Therefore female migrant workers’ incomes are more stable over the cycle and do not immediately rise or fall to the same extent.

This in turn means that source countries that have a disproportionately higher share of women emigrants (such as the Philippines and Sri Lanka) would tend to experience less adverse impact in terms of falling remittances. Indeed, in the Philippines, the most recent data indicate that remittance flows are still increasing slightly, at an annual rate of around two percent. This does not mean that there will be no impact at all, but certainly the adverse effects will be less and will take longer to evolve than if the migration had been dominated by male workers.

There are other reasons why the crisis has had limited impact on patterns of migration. For example, one expectation was that return migration would be dominated by the worst hit workers, who in turn were expected to be the undocumented, irregular or illegal migrants who are mostly in low-wage and low-skilled occupations, and do not qualify for any kind of official support such as welfare benefits or social security from the host country. 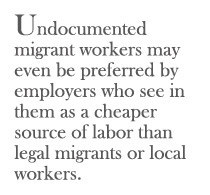 But the initial evidence belies this expectation because, for one, such migrants may be unwilling to return home to face possibly even more fragile and insecure employment conditions in their own country. Many developing countries have been hit worse by the financial crisis that originated in the US economy. So the push factors that operated to cause international migration in search of work remain as strong as ever. The unwillingness to return in such a context may be even stronger in cases where the undocumented migrants have already developed some local social networks that allow them to survive for a period while they look for other employment.

In the host country, undocumented migrant workers may even be preferred by employers who see in them as a cheaper source of labor than legal migrants or local workers. In the context of this crisis, preference for cheaper labor may become even sharper. This may be yet another reason why women migrants may be affected less severely, since women migrants dominate in the undocumented and illegal category.

In any case, one of the basic pull factors still remains significant: the demographic transition in the North that is increasing the share of the older population that requires more care from younger workers, who must therefore come from abroad. So the current crisis may temporarily slow down the ongoing process of international migration for work, but it is unlikely to reverse it.

Jayati Ghosh is professor of economics at the Jawaharlal Nehru University, New Delhi.