Flora and fauna have long moved around the globe along with wandering human beings. As the native Indians in North America learned after the arrival of diseases from the Old World, not all these exchanges have been beneficial. In recent years this problem has become even more acute, as increased travel and commerce have enabled invasive organisms to spread with alarming speed. In the United States, government officials have banned the importation of snakefish after the rapid reproduction of the foreign fish began to threaten local waters. All over the world, plants and animals are entering foreign territory by sea, land, and air. Native species often suffer from the competition or directly predatory behavior of their new neighbors. This byproduct of globalization has scientists worried about what one calls, “after habitat loss, the greatest threat to biodiversity.” - YaleGlobal 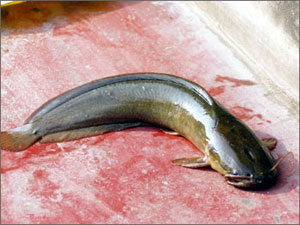 SINGAPORE - Alarmed at the potential damage to its inland fisheries, the United States has announced that it will ban imports of an unusual fish from Asia and Africa that is prized for its supposedly powerful medicinal properties, particularly by Asians living in the U.S.

Known as the snakehead, it is a freshwater fish with razor-sharp teeth and a voracious appetite, often consuming all other fish in a lake, pond or river. It reproduces quickly.

Snake-like in appearance and up to a meter long when fully grown, the fish can slither across land and live out of water for at least three days.

"These fish are like something from a bad horror movie," U.S. Interior Secretary Gale Norton said in July as she announced the plan to prohibit the import or trade of 28 species of the snakehead.

"They have the potential to cause enormous damage to our valuable recreational and commercial fisheries," she said. "We must do everything we can to prevent them from entering our waters, either accidentally or intentionally."

The proposed ban is just the latest example of the rapid spread of so-called invasive alien species as burgeoning transport, trade, travel and tourism make it increasingly easy for animals, plants and organisms previously confined to one part of the world to spread to others, often causing the decline or even extinction of local populations unable to compete with the newcomers.

"Few people recognize how profoundly invasive alien species have reshaped the natural landscape around them over the past decades and centuries," said Klaus Toepfer, Executive Director of the United Nations Environment Program.

"From tree-killing diseases to rats and other alien predators, invasives have traveled with traders, emigrants and now tourists to new lands where the native species have not had time to evolve adequate protections against these sudden threats," he said. "As globalization continues to accelerate, the risks can only grow."

Norton acted after Maryland wildlife officials found one species of snakehead in a pond in the state. Officials said that two of the fish, known as northern snakeheads, were released into the pond by an Asian living in the U.S. who had purchased them to make soup for his ill sister. By the time the fish arrived, the woman had recovered, so the man discarded the fish in the pond near his home where they not only survived but reproduced.

Tests in September showed that the breeding population of the snakehead fish had been wiped out, and Maryland wildlife officials have started rehabilitating the pond where the alien invaders had established themselves.

State biologists found the bodies of six adult snakeheads and more than 1,000 juveniles some two weeks after they sprayed the poison rotenone - commonly used to control fish populations because it does not affect humans or other animals, even if they eat the fish - on the 4-acre pond. The burgeoning snakehead population was the progeny of the original pair that were dropped into the pond two years earlier.

A study in 2001 by the U.S. Fish and Wildlife Service found that snakeheads were in six other states and had established reproducing populations in two of them - Florida and Hawaii. Some 17,000 snakeheads were imported into the U.S. between 1997 and 2000 by seafood sellers and aquarium shops, the Service said in a statement.

The problem of hitchhiking species isn't new. As humans started to travel to distant countries and continents in search of greater wealth, living space, or religious converts, they often took along or brought back with them, deliberately or inadvertently, domesticated and wild species that went on to colonize new areas. Sheep, deer, cats and rats are just a few obvious examples.

As the pace and scope of globalization intensified in recent decades, the movement of species around the world has become much more widespread - and much more difficult to control.

David Barnes, a marine biologist at the British Antarctic Survey organization, spent ten years studying 30 remote islands from the Arctic to the Antarctic. He was searching for evidence of marine organisms that travel the world on flotillas of discarded plastic and other human-made rubbish, often washing up on beaches and coastlines. He reported his findings in the science journal Nature in April.

Alien species are known to take rides on boats, planes, travelers and exported goods, including timber, farm produce and nursery plants. Marine organisms frequently move from one location to another via ships, either on their hulls or in their ballast water. Some 10 million tons of ballast water are estimated to move around the world each year on vessels, carrying diverse marine species that can spread waterborne diseases or harm local species.

But Barnes said that his study pointed to the increasing amounts of floating rubbish as another key transmitter of invasive alien species. "Rubbish at sea is much more dangerous than we had previously assumed," he said. "Floating debris is the most common sea-going transport system and is responsible for the widespread distribution of many marine animals that use it to hitch a ride."

Invasive alien species are those that occur outside their natural range and threaten the existence of native plants, animals and organisms.

"After habitat loss, this biological invasion constitutes the greatest threat to biodiversity, and it has already had devastating consequences for the planet," said Jeffrey A. McNeely, chief scientist of the International Union for the Conservation of Nature (IUCN), an organization made up of nearly 80 states, over 100 government agencies, more than 750 non-government organizations, and 10,000 scientists and experts. The IUCN aims to conserve the environment and use natural resources sustainably.

The economic bill caused by invasive species amounts to hundreds of billions of dollars a year, officials and scientists say. For example, invasive plant species cover an estimated 100 million acres in the U.S. and are spreading annually across three million additional acres. American farmers spend billions of dollars every year on pesticides to destroy invasive plants and weeds. Altogether, an estimated 137 billion dollars is spent annually in the U.S. to control all kinds of invasive alien species.

Crazy ants, so-called because of their frenetic movements, have invaded native ecosystems and caused extensive environmental damage from Hawaii to the Seychelles and Zanzibar. On Australia's Christmas Island, in the Indian Ocean, vast armies of crazy ants have built up in the past years, after the first of the fast-breeding colonizers apparently reached the island from Africa by ship or on flotsam.

The ants may already have devoured up to half of the island's 80 million land crabs, a species unique to the area, said David Slip, the island's official conservator. The land crabs are blinded by the ants' formic acid, quickly overwhelmed, partially eaten, and left in rotting piles on the forest floor. The acid-squirting ants now dominate and degrade a quarter of the island's rainforest.

Another menace has been water hyacinth. The beautiful purple and violet flowers water hyacinth make it a very popular ornamental plant for ponds. Yet it is one of the worst aquatic weeds in the world capable of doubling its population in only 12 days. As a result of horticultural trade, infestations of the weed are now found in some 50 countries on five continents, blocking waterways and interfering with boat traffic, swimming and fishing. Water hyacinth also prevents sunlight and oxygen from reaching the water and submerged plants beneath it. Its shading and crowding of native aquatic plants dramatically reduce biological diversity in aquatic ecosystems, scientists say.

Five years ago, some 30 million people in Kenya, Uganda and Tanzania who rely for their basic sustenance on Lake Victoria, the world's second largest fresh water lake, were facing disaster The lake had become so choked with water hyacinth that fishing dhows could no longer reach open water. Catches dropped dramatically and many fishing villages were being abandoned. 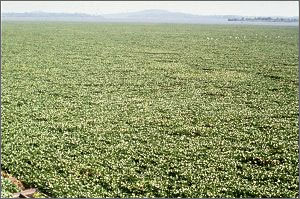 Before - Port Bell, Lake Victoria as it was, mechanical harvesters only offered a temporary solution. (Copyright: 2000 Australian Broadcasting Corporation)

But science and international cooperation, or globalization in another guise, can be mobilized successfully to battle invasive species. Australian scientists had successfully used another South American import, Neochitina weevils, to control water hyacinth that was choking lagoons on the Sepik River in Papua New Guinea. They managed to persuade enough African scientists and officials to try the weevils on Lake Victoria's water hyacinth, instead of implementing much more expensive alternatives, including use of herbicides and harvesting machines, to try to eradicate the plant. 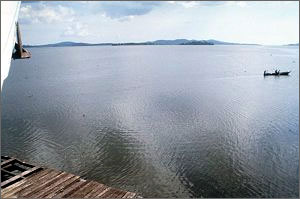 After - Port Bell, Lake Victoria dramatically changed once the beetles were established on the hyacinth weed. (Copyright: 2000 Australian Broadcasting Corporation)

The weevils kill the water hyacinth by feeding on the leaves. More importantly, larvae tunnel into the leaf stalks and the crown of the plant, destroying the growing points. The weed then rots and dies. Today, most of the weed in Lake Victoria has vanished and fishing has rebounded. Biological control was the key to success.

However, prevention remains a less costly alternative. Hamdullah Zedan, Executive Secretary of the Convention on Biological Diversity, said that a more effective international system to prevent bio-invasions in all areas of the world was urgently needed.

"Priority should be given to a stronger system for preventing entry in the first place," he said. "But where entry has already taken place, we need more effective measures to stop invasive alien species from establishing themselves and spreading. And where eradication is not feasible or cost-effective, we need to invest more in containment and long-term control measures."